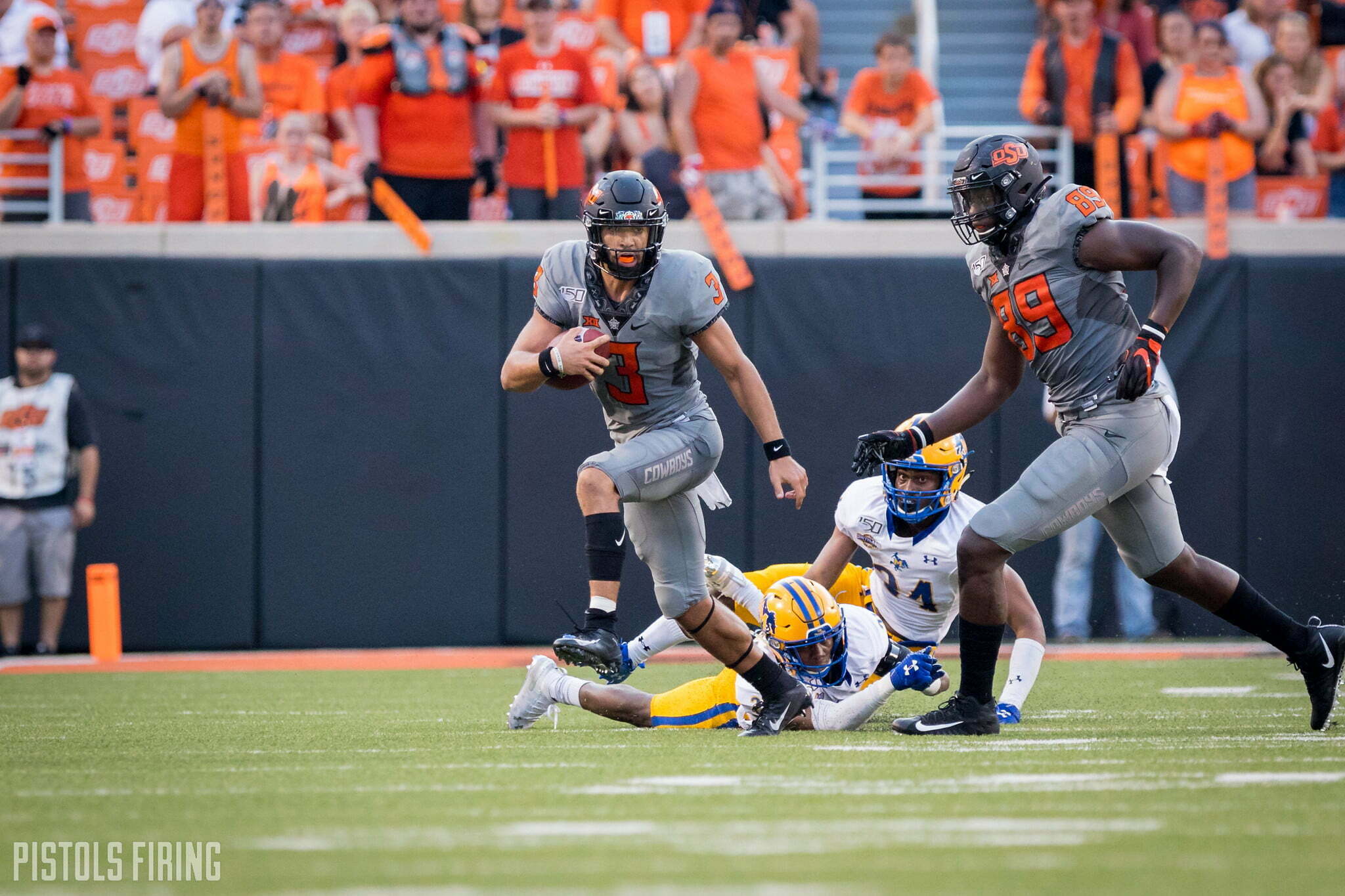 The Cowboys are back from their bye week and will be back in front of their home crowd on Saturday to welcome the unbeaten Bears. Before Homecoming weekend gets into full swing, we thought we’d lay our predictions for what should be a huge game for the Pokes, one way or the other.

Kyle Boone: Oklahoma State 36 | Baylor 30 — It feels like OSU is due a big game at home in a big spot. The defense finally forces some turnovers and Sanders plays a clean all-around game handing the ball of 35 times to Chuba.

Kyle Cox: Oklahoma State 35|Baylor 28 — I think the Cowboys play a much cleaner game at home (they’re due, at least) and I think the upshot of that is a two-score lead when it counts with a late TD by the Bears.

Marshall Scott: Oklahoma State 38|Baylor 31 — Based off their performance against Texas Tech two weekends ago, should the Cowboys win this game? No. But it’s that type of logic from recent memory as to why they will.

Who has more TDs, Tylan or Chuba?

Porter: I think Tylan goes bonkers. Baylor’s run defense is good, and I think they’ll sell out to stop Canada’s Cowboy and just pray Tylan doesn’t burn them. Tylan will burn them.

Boone: It’s Friday, so I’m going off the board. Here’s a prediction: Chuba has two touchdowns, but the defense and/or special teams scores more than Tylan in this game.

Cox: I’m ready for a Tylan-goes-bonkers game, but I’ll go with Chuba simply because I think he will continue to dominate the ball with Russell Westbrook-like usage rates.

Scott: Chuba — He’s had a week off and primed to make up for all the carries he missed out on. (Kinda kidding)

Which Spencer Sanders do we see?

Porter: Oh man, I truly don’t know. I have the same questions KB had after the Tech game regarding Sanders’ declaration about not losing again. This year? This month? In his career? For the rest of time?

Here’s my hope: Gundy took a step back in the bye week and thought we’re paying Sean Gleeson too much for me to not trust him a little more and that leads to freeing Sanders (and everyone else) up and not just him running around like it’s a Sigma Nu-Farmhouse flag football game back there (shout out to the all-night pompers, by the way. You’re the real MVPs).

Boone: I’m not prepared to jump off the Spencer Sanders bandwagon. When he not-so-subtly proclaimed after the Tech game that, “I’m not losing again,” I fully believed him. If you’re selling stock I’m buying all of it. I think he has a big game here.

Cox: I think the young gunslinger is due for an ascent uphill after two weeks in the valley. Like I said, take away the turnovers — a couple of which are easily avoidable — and I think Spencer puts up numbers and points on an off game. This is processGet him in front of his home crowd and I think he will bounce back nicely.

Scott: I think we see a Spencer Sanders similar to the one we saw against Texas. His back is against the wall and has been for the whole bye week. I think he comes out and makes some plays, but he still might turn the ball over once or twice.