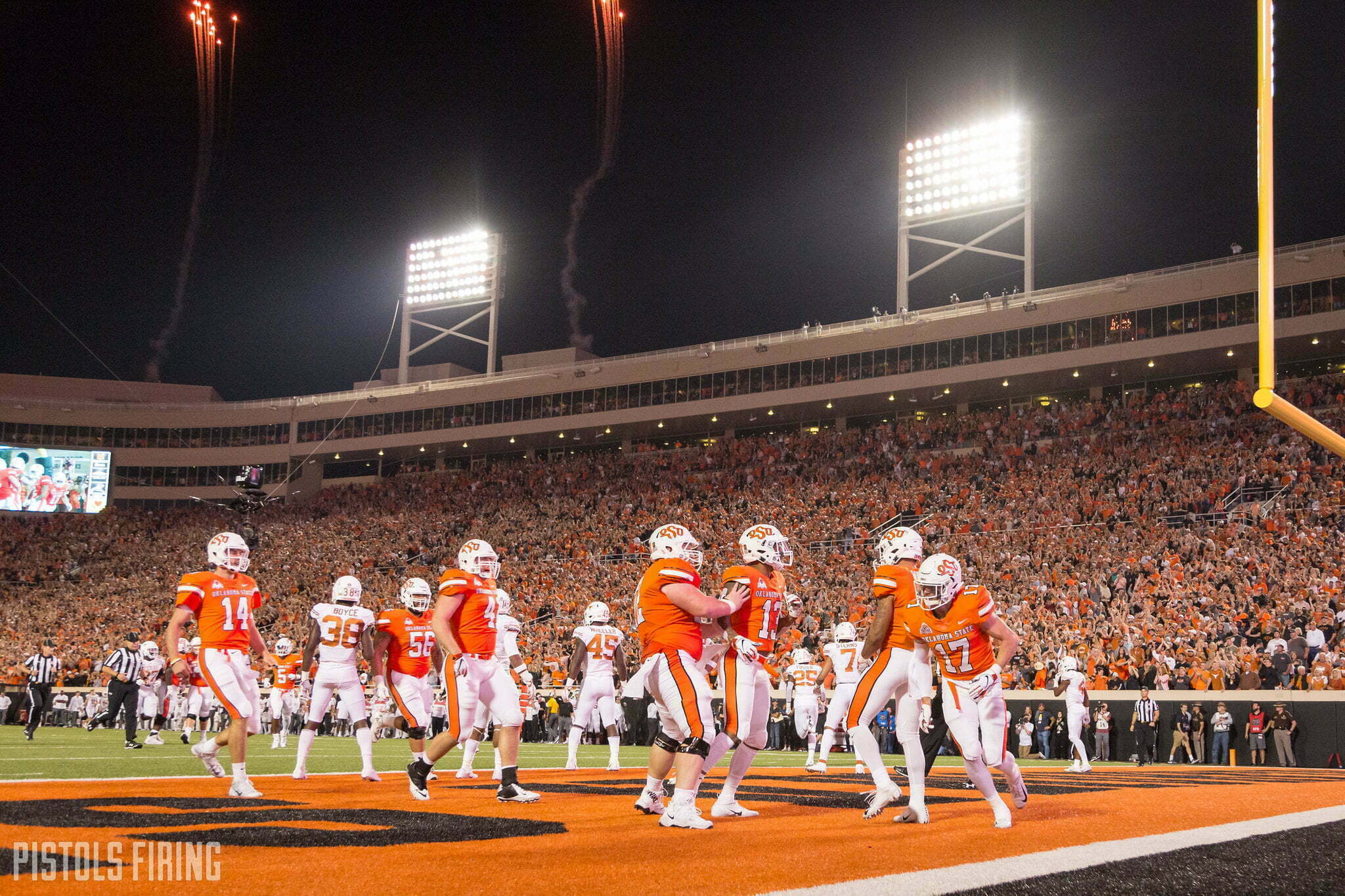 The word “prediction” is more often than not just a shorthand way of saying “wow, you are going to look really dumb when we eventually revisit this!” But guess what? That isn’t going to stop us from spilling thoughts onto the page. We are men of the people!

So today, we present our annual predictions for OSU as we gear up for the upcoming season.

We will name our MVP for each side of the ball then really get into the nitty gritty on how we think things will unfold — who will lead the team in tackles, which freshman stands out, etc. — as an exercise to really open up our brain and give you a look into our thoughts.

As a not-so-humble-but-trying-to-be-humble-brag, last year our team really nailed a few things that weren’t among conventional wisdom at the time of writing. Cox called Collin Oliver’s breakout well before he earned Freshman All-America honors. We all correctly forecasted the 1-2 hierarchy of the nebulous receiving corps. And us Three Stooges the PFB dynamic trio even guessed correctly that the Pokes would get to double digits in the win column though none of us — not even Marsh! — thought 12 wins was in play.).

Marshall Scott: Despite this prompt being first, I saved it for last (you’ll see why when you get to me untangling OSU’s receiving depth). But, I suppose I came to the conclusion of Braydon Johnson. This could age poorly or outstandingly, but with new starters at running back, I feel like I have to go with a wide out here. After missing most of last season, watch out for the speedy Johnson in 2022.

Kyle Boone: Since we’re eliminating the QB, I’ll go with who I think could be his favorite target: Jaden Bray. What I saw from him as a freshman last year was Blackmon-esque in spurts. If he makes a leap as a second-year player he could emerge as one of the best receiving threats in the Big 12. It’s a bit of a blind-faith projection, but that’s why we’re here, right?

Kyle Cox: I’m going to go with Dominic Richardson. I think Sanders will spread the ball out to several receivers, making the Cowboys that much more dangerous, but I don’t think there will be as much as a sure-fire WR1. That being said, I think Richardson is the workhorse on the ground for OSU. With an improving O-line, that spread-out passing game and his slasher running style, big numbers and TDs will be ripe for the picking for No. 20.

Marsh: Collin Oliver. He had 11.5 sacks as a true freshman and is up 25 pounds of muscle — need I say more?

Boone: I’m going to go with Brock Martin. I don’t think he’ll lead the team in sacks, but I think he’ll be really darn close to it. And that, combined with his outspoken leadership and experience, could (I think) propel him to team MVP on defense.

Cox: I tend to think Oliver is the obvious choice but since Marsh took him, give me the sneaky potential all-conference QB hunter, Trace Ford.

Who leads the team in rushing?

Marsh: Dominic Richardson. This seems like the safe play here on Aug. 24, so I will go with it. But no one was expecting Jaylen Warren to Jaylen Warren last season, so I wouldn’t be surprised if someone else ended tops in this stat.

Boone: Dominic Richardson. As much as I want to tout Ollie Gordon, I think Richardson has the familiarity of the system and the trust of the coaching staff to earn most of the carries in what is expected to be a running back by committee approach.

Cox: See above. He’s my offensive MVP so he’d better lead the team in rushing.

Predict the yards and TDs for Spencer Sanders

Who leads the team in receiving?

Marsh: I’ve been pounding the Jaden Bray drum all offseason, but I might be having second thoughts. It’s not that I don’t like Bray, I really do, but I’ve heard nothing but great things about Braydon Johnson. And I think John Paul Richardson could help unlock Brennan Presley even further. So, now that I’ve mentioned four receivers, I will officially say — Braydon Johnson.

Boone: Jaden Bray. After playing in the most games among all freshmen last season (12), I think he steps into the starring role on the outside at receiver — far and away the most valuable and productive position on the OSU offense. He has the height and explosive after-the-catch ability to be a true difference-maker.

Cox: I tend to agree with Boone here. I think Bray has a breakout year.

Who finishes the season second in receiving?

Marsh: I have to go through this again? Give me Brennan Presley here. I really went from Jaden Bray being No. 1 to No. 3. That’s all credit to Kasey Dunn’s embarrassment of riches.

Boone: Brennan Presley. I think he leads the team in receptions but finishes second in receiving yards, just because most of his targets will be underneath as Spencer Sanders’ security blanket.

Cox: Brennan Presley is too dynamic to not get him the ball in space. If he’s not in the top 3 at least, then OSU is mishandling him. They won’t.

Marsh: Ollie Gordon. I think Gordon will have the most opportunity among OSU’s freshmen with the inexperience of the running back room. And he is a 6-foot-1, 211-pound running back — what’s not to love?

Boone: Talyn Shettron. Again: I really want to tout Ollie Gordon. But Shettron, OSU’s highest-ranked signee from last recruiting cycle, plays receiver — a position OSU needs people to step up in — and has the talent and opportunity to be a day-one contributor. It’s not crazy to envision him emerging as a reliable rotation player . . . and maybe more.

Cox: Give me Braylin Presley. I’m going out on a bit of a limb here, but I think OSU finds a way to get both Presley brothers on the field sooner than later. Post them on opposite corners of the field on special teams and opposing punters and kickers won’t have anywhere to place the ball.

Marsh: Mason Cobb. It’ll either be Cobb or Xavier Benson, but I’ll pick the kid from Utah.

Boone: Xavier Benson. New name you might not have heard of yet, given that this is his first year on campus, but Benson has plenty of experience at linebacker — he played last season at the JUCO level and is formerly a starter at Texas Tech. With Malcolm Rodriguez and Devin Harper gone, he’ll have ample chances to make plays in the middle of the OSU defense.

Cox: It will be someone not named Malcolm Rodrigez for the first time since Mike Gundy started rocking a mullet. (Don’t fact-check me on that.) Give me Benson.

Marsh: Collin Oliver. Brock Martin could threaten, as could Trace Ford, but it’s hard to not pick a guy who had double-digit sacks as a true freshman.

Boone: It’s Collin Oliver. If healthy, there’s no one on this OSU roster as explosive as he is off the edge and rushing the quarterback. He’ll easily lead the team in pressures, and statistically that’ll put him in a great spot to (again) lead the team in sacks.

Cox: As much as I’m excited about Ford’s return, this is Oliver’s spot to lose.

Marsh: Jabbar Muhammad. This is a bit of a risk because Jason Taylor is a playmaker. And, of the nine passes OSU intercepted last season, only one came from a cornerback. But the Brodrick Brown comp was all I needed to know that Muhammad is a dawg.

Boone: Jason Taylor. Mr. Steal Yo Ball is a born playmaker who seems to always be in the right place at the right time. He’ll have a bigger opportunity to shine with several veteran safeties now gone and figures to be one of the most talented and experienced defensive backs.

Cox: I too have to go with Taylor. He’s got an uncanny knack for takeaways, and I think that only becomes more apparent as he leads the Cowboys’ secondary.

Surprise of the year

Marsh: Kansas State spoils somebody’s season. I’m not sure this has to do with OSU as much as it does the Big 12 as a whole. My opinions on K-State flip almost daily. With Deuce Vaughn and Felix Anudike-Uzomah, this team ought to be good. But, those two were on the team last season, as well, and then I think to myself “Is Adrian Martinez really going to make a difference?” So, I think I’m out on the Wildcats being a Big 12 title contender, but I think they have the skill to blow up someone’s season.

Cox: Last year I predicted a Bedlam win as my surprise so I’ll go with something I alluded to above. Spencer Sanders ups his passing numbers across the board while throwing less than eight (😯) interceptions on the year, a career-low.

Marsh: Well, I predicted OSU to finish atop the standings in my preseason ballot, so I shall stick to that here.