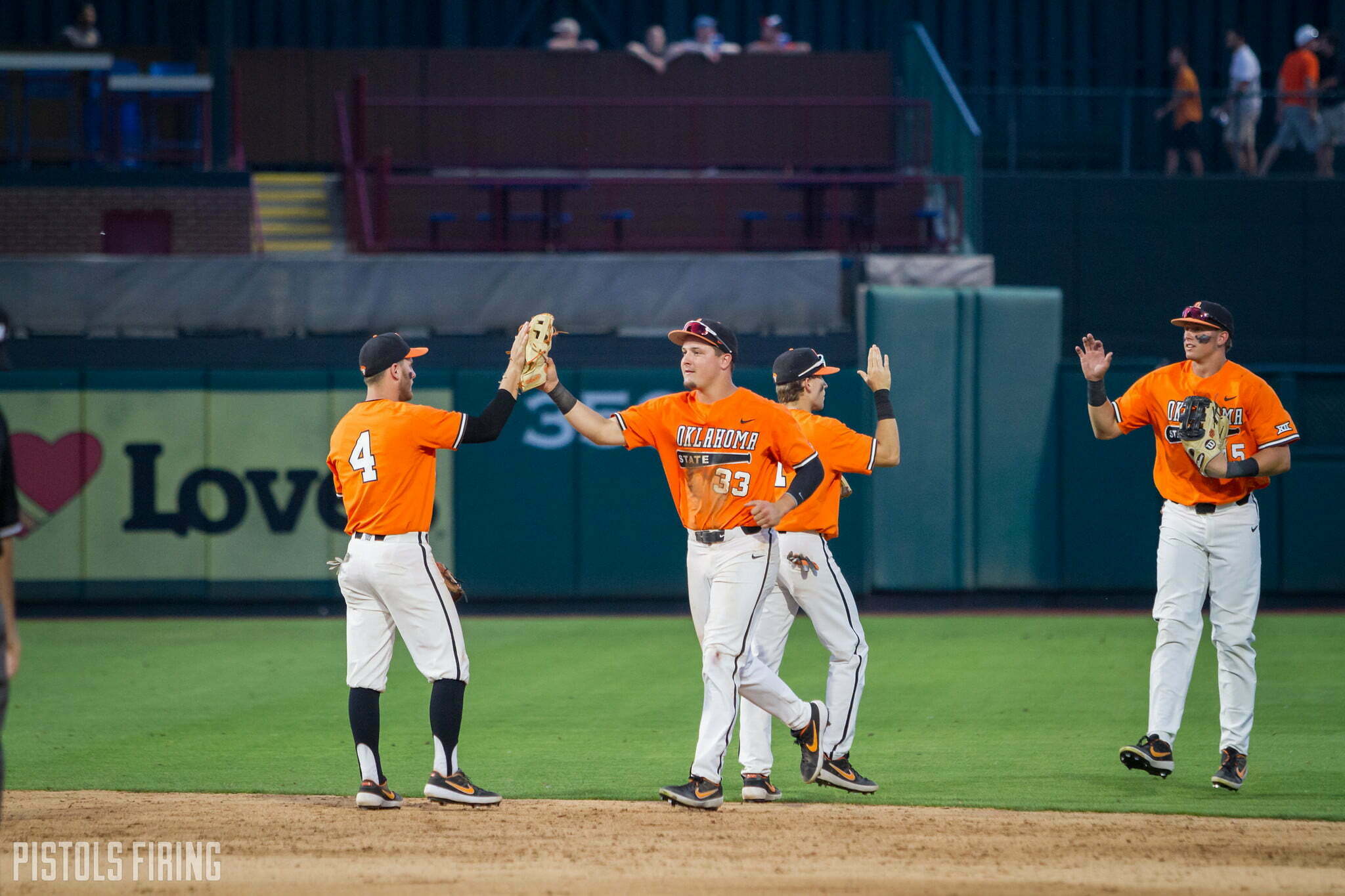 PFB’s editorial staff got together ahead of OSU’s upcoming Super Regional matchup with Texas Tech to rap about the Cowboys’ season so far and lay out our predictions for this weekend. Have a peek behind the Slack door and enjoy.

Kyle Cox: Josh Holliday talked about OSU being a different team than the one that got swept in Lubbock (they’re 14-3 since), what is one moment during that time that sticks out to you (that wasn’t the three-run #BooneBomb which renamed Bricktown Ballpark)?

Kyle Boone: Sweeping defending national champion Oregon State in Corvallis, for sure. And what’s crazy is that came a week after they were swept by the flying Tacos.

Marshall Scott: I too was going to say the Corvallis sweep, but for mixing it ups sake, I’ll go with the Cowboys’ two-game series against Baylor in what will be the last games in Allie P. The Cowboys absolutely rocked Baylor 16-4 the first night and then showed they could win a down and dirty one too, winning 5-4 the next night. The Cowboys ripped a Big 12 title from the Bears that weekend.

Cox: Mine has to be the most recent game-winner. Maybe it’s recency bias but it also felt like the last hurdle OSU had to get over to move on from OKC. The Pokes had been mostly stymied by UConn’s impressive pitching staff. Until… Carson McCusker’s two-run RBI that broke the Huskies’ back. The whole sequence really, Trevor Boone and Bryce Carter advancing on the error. The Carter wave at second. The McCusker wave at second. Perfect moment for a regional-sealing game.

Porter: I actually thought the Big 12 Championship semifinal win over TCU was massive. Maybe they’re still in the same spot regardless, but that game kept the momentum rolling straight into the post-postseason.

Cox: Okay, on to the bomb. What was your reaction to “The H” that will live in infamy? Marsh, you were there. How electric was that stadium?

Marshall: The stadium went nuts absolutely nuts. I didn’t even watch it leave the park because off the bat you could just hear that it was gone. I mentioned in my five thoughts that it was Boonephoria, which is about as close a comparison I can make.

Cox: For me, it was a slow-developing, but inevitable crescendo. I remember telling my wife to stay and watch this at-bat when Boone approached. We both watched the replay repeatedly and talked about it for at least an hour.

Boone: The Boone family group text was off the chain, I can tell you that.

Porter: I can only imagine what an off-the-chain group text in the Boone family looks like. True story here: I told Marshall to go home about two hours before this happened. He’d been grinding his brains out with softball and baseball for a few weeks, and I didn’t want him in OKC until 3 a.m. again. Thankfully he ignored me (for his own sake and the sake of the site). I woke up the next day laughing at how absurd it all was.

Cox: Okay, on a bigger scale, what equates to a successful 2018-19 season for OSU? A trip to Omaha? Making a Super Regional? Just getting to the postseason?

Boone: It’s successful already having hosted and advanced to another Super. Winning the Super would make it very successful. And going to Omaha would make it a really special one.

Marshall: Yeah, I’m with Boone. It’s been a successful year, but two wins this weekend will definitely add to it in OSU’s baseball lore. I think with the history this program has anything less that postseason play will be fairly disappointing.

Cox: I agree. Hosting is probably a successful season for just about any program. Going to Omaha twice in four years would be special.

It’s interesting to look at expectations now against the start of Holliday’s tenure, and how they will continue to change if they get pasted Tech. Feeding the monster as Gundy would say.

Porter: I look at baseball the same way I look at basketball at OSU. You should be playing to get into the Sweet 16. Broadly speaking, a successful year for Oklahoma State baseball is making it to a regional final (which they did against UConn). Everything else is icing.

Cox: Last thing from me, what are your predictions for the Lubbock Super Regional?

Marshall: I’m going to say Tech wins it two games to one. Jensen Elliott has been on another planet as of late, so I think the Cowboys best shot at winning is Friday. Offensively, the Cowboys were inconsistent this past weekend, so with that, I’m going to take the team who swept the regular season series.

Boone: I think the road ends in Tacotown. OSU’s bats — besides Trevor Boone’s — were practically dead in OKC. Really concerning to me. They need a massive rally to get back to what I thought their postseason potential was, and against a surging Texas Tech team I think that’s too tall an order. OSU will steal one but fall 2-1.

Cox: No faith! I’ll take the Pokes to extend this thing on Saturday and punch their ticket to Omaha on Sunday. L-W-W

Porter: I’m with Cox! I mentioned this to Carson on our podcast on Thursday, but OSU is in a great spot. Tech is the Big 12 champ, playing at home as the national seed and favored to win. Holliday and Co. can just ride in uninhibited with zero expectations. W-L-W

And if Boone walks it off on Sunday, we may have to send our Boone to Omaha.