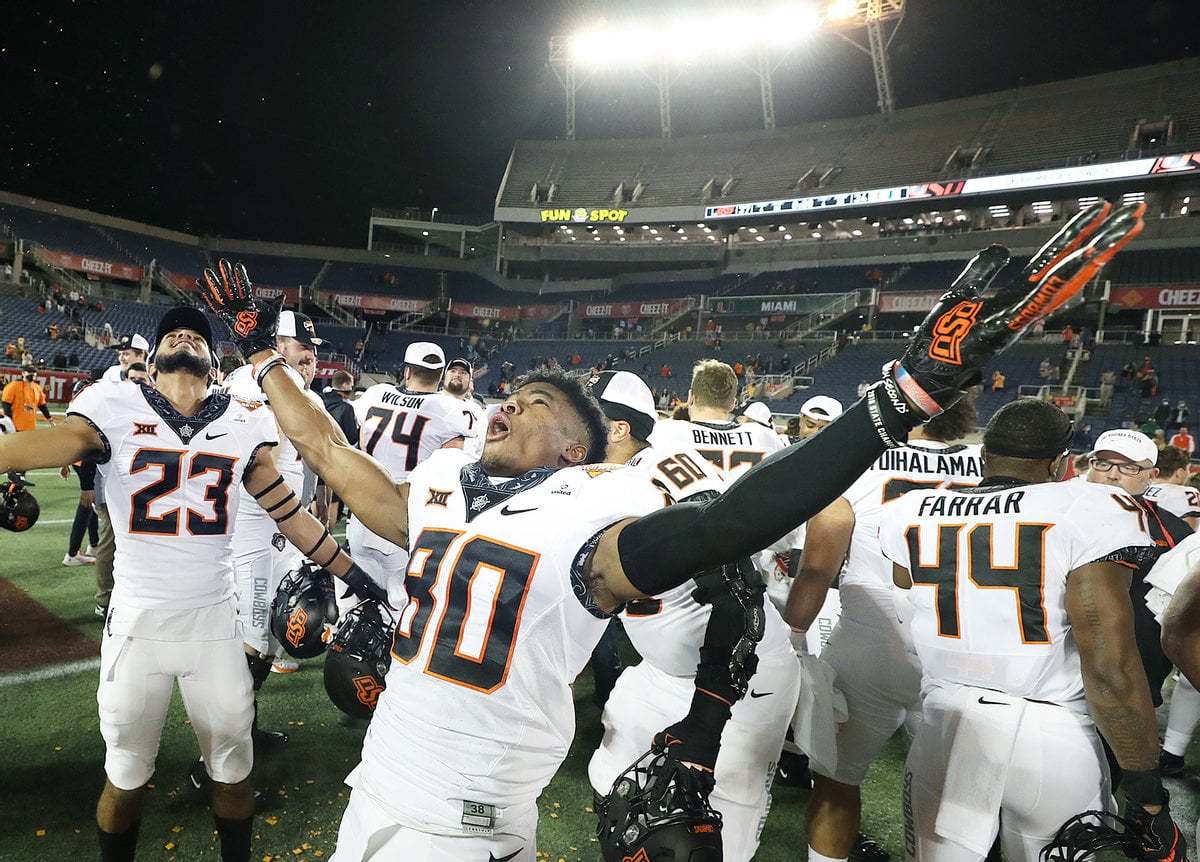 Then we jumped into the OSU hoops, our early impressions of Cade and whether or not we’re ready to smash the panic button after a 1-3 Big 12 start.

Kyle Cox: Okay, let’s kick this off with a reaction to the bowl game and the Cowboys’ season overall. We could probably assume the Cowboys end at 10-3 if they play all their noncon games but did this feel like a 10-win year to you?

Marshall Scott: In the heat of it, it felt like a disappointment, but I think looking back at it, this will be viewed as a solid year. Spencer got hurt, Chuba got hurt, Tylan got hurt and the offensive line stayed playing “musical chairs.” There was a lot of expectations leading into the year, but I think the target got moved a little bit with all the shuffling.

Cox: I will say yes, I’d give them the asterisk due to the noncon, but if we’re calling it a 10-win year, it’s almost as disappointing as the 10 wins in 2017. Both ended on a middling bowl victory but both teams left Ws on the field.

Kyle Boone: It feels more like the 2014 season when OSU barely got bowl eligible than it does a 10-win season. That’s probably because preseason expectations didn’t come close to reality, but also because OSU wasn’t a contender by season’s end for the conference crown. This was supposed to be the year OSU would make the leap and all the returning pieces could put it over the top. Just didn’t happen. And making matters more difficult to swallow, it wasn’t really close.

Boone: Maybe two extra nonconference wins makes it look better on paper, I guess. But it was Big 12 title or bust this season given expectations and returning roster and it wound up being the latter.

What about the bowl game? Are you encouraged for next season based on the Cheez-It crumbs? (Spencer’s stat line, BP sighting, etc.)

Scott: Sanders is such a roller coaster. After rough patches throughout the year, I feel like I’m all the way back on the hype train. And Brennan Presley is who we thought he was. Losing Chuba Hubbard and Tylan Wallace stinks for OSU, but there is some excitement there with what those guys showed. At points this season, I didn’t know what to be hyped about for next year.

Cox: I want to be excited by Spencer’s game, I really do. I’ll going to say mildly enthused. But I’m downright thrilled for The Brennan Presley Show, which means he’ll probably be OSU’s WR3 next year.

Boone: Honestly, I’m not sure. I feel like the bowl game performance should pump me up for 2021. But I’m not really pumped for 2021 for whatever reason. Spencer was mostly great but it’s hard to ignore how inconsistent he was all season and I’m not convinced he can make a huge developmental leap. Then there’s the matter of replacing Tylan and Chuba and Rodarius (oh my). I guess I’m excited for Dom Richardson and Brennan Presley to take over as new faces of the skill talent, but I’m a bit nervie about some other pieces — and in particular about the QB position.

Scott: You guys talk like you just went through the craziest year in human history. I’m that “And I’ll do it again” meme, already having my hopes up.

Cox: I’ll have what he’s having.

Boone: By the fall I will have fully bought in to this team again. I just don’t have the same orange-tinted optimism coming out of this season that I did coming out of, say, the 2014 season after Rudy took over and gave us some legit hope. Like, I’m a First Team All-Brennan Presley and Dominic Richardson Fan, but they aren’t going to change the entire fortunes of a program the way Rudolph could (and did).

Scott: Rudolph is the greatest QB in program history, how could they?

Boone: don’t do this

Cox: I’m just below that level, as well. And not trying to downplay the excitement. Also, the defense gained a boon with guys like Tre Sterling and Malcolm Rodriguez sticking around and should still be salty.

Boone: I tell you what, I’m pretty fired up about the offensive line next season. No cap (as the kids say. Do they say that?)

Cox: Now you’re toying with my emotions. Imagine if Rudy had a legit OL his full tenure.

Cox: Speaking of GOAT candidates, let’s turn to hoops. Your impression of Cade through 10 games and, separately, how close are you to the panic button after a 1-3 Big 12 start?

Boone: He’s very good and I am very impressed. Quietly leading the Big 12 in scoring and just relentlessly impactful on both ends. Feels like he could even go up a level, too.

Scott: Cade has been great. The 1-3 start is the most puzzling thing I’ve ever seen. OSU was the better team in three of those games. Learning to win in the Big 12 must be difficult.

Boone: Not panicking on the 1-3 start. I’m panicking on how OSU has started 1-3. They keep getting big leads then blowing it. It’s maddening.

Scott: The impressive thing about him leading the Big 12 in scoring is that he isn’t a pure scorer. He is more of a playmaker. People will say what they will because OSU is 1-3, but he has been fantastic.

I’ll say Cade has been as advertised. He was never going to chuck of up 3s like Marcus Smart (a good thing), but he affects the team in every facet. I’d like him to figure out how to stay on the court through the final buzzer, though.

Boone: I think they’ll figure it out. Boynton’s tinkered with the lineup and rotations a bit and I think they’ve got their core settled in. Very optimistic about Ice’s increased role, Bryce getting starting duties and Rondel continuing to be a revelation as a bench scorer. They’ve got a ton of dudes. Still think this is a tournament team.

Cox: I am not even looking at the panic button yet. I think the team has room to grow and I never expected them to start off 4-0 either. Plus, it’s been a tough slate of games, though it won’t get any easier.

Also, my favorite player switches between Bryce and Rondel multiple times per game.

Boone: Yeah, to Marsh’s point, lineup data from KenPom over the last five games shows that Cade most frequently is playing … power forward. That’s a testament to his versatility but also to OSU’s lack of size. He’s getting tough matchups against bigger dudes. The result has been that he’s fouled out twice in big games.

Cox: That makes sense. But he’s going to have to guard a lot of those big guys, right? Especially if your nephews can’t keep from fouling out too.

Scott: Having MA Moncrieffe healthy should help with Cade. And having Kalib not get four fouls in seven minutes or whatever it was.

Rondel gets more of the pub because he’s an Oklahoma kid, and I get it. But Bryce is electric.

Boone: Yeah, I think you have to hope MAM gets right and my cousins can assume some of those responsibilities.

Cox: Sorry to age you with the “nephews” comment.

Cox: We’ll save predix for later, but what’s one key for OSU to beat K-State on Saturday?

Boone: Show up on time and they’ll be good. K-State is legit bad.

Scott: OSU just needs to play its game. K-State has gotten better, but it lost to a D-II team this year.

Cox: I’ll piggyback off of that. The Pokes need to play their game, hot starts and all, and then try to get some practice finishing stronger. Let’s keep the second-half scoring droughts to a minimum.