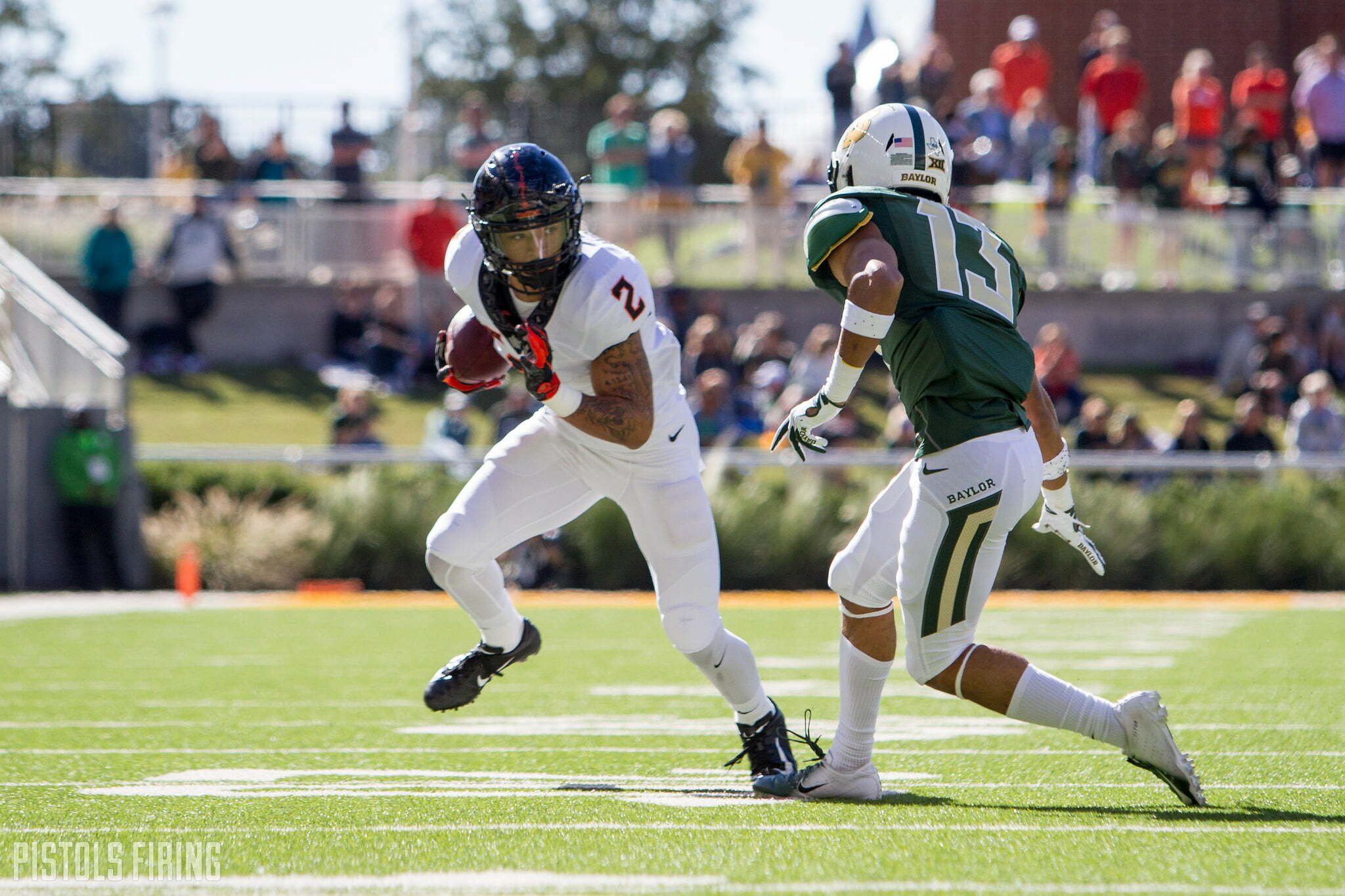 Our most viewed post last week was a random lark by yours truly as I came across an article on how much the Pac-12 is treading water and thought about how Oklahoma State was rumored to be headed there along with OU and Texas. I stumbled across the article, wrote down some thoughts and you guys provided great feedback.

At its heart, that’s what a site like this is and can be. We get away from that sometimes because there’s stuff we just need to cover — and to be honest, it’s hard to connect those dots all the time — but I think that’s what makes a place like PFB (or what my buddy Brendan Porath is doing at SB Nation) fun and intriguing.

All that to say, here are five what ifs that have been percolating in my brain over the last few weeks about a random conglomeration of Oklahoma State athletics, athletes, coaches and the general *does full hand air quotes like Gundy* world we live in.

1. What if Penn State can get got?

How good was that OSU-Iowa dual on Sunday? I found myself scrolling through all of Jackson’s photos and digitally inhaling all of the videos Seth and Marshall were posting in our Slack. Even from afar, it was a euphoric experience and a cool reminder of what GIA can be.

It was also a reminder of what awaits at the end of an arduous postseason slate. 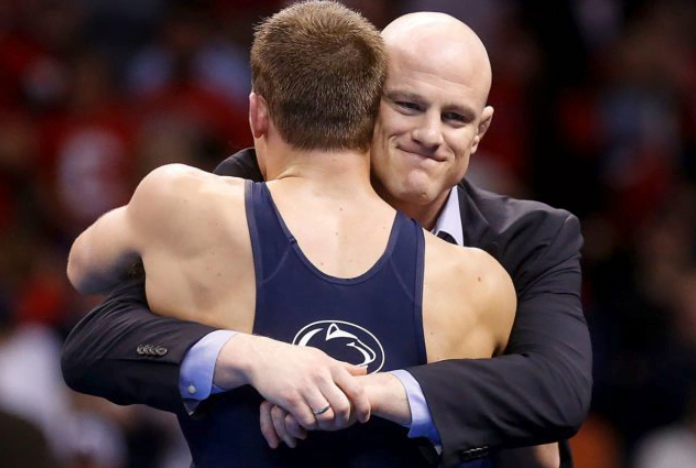 OSU’s thumping of Iowa on Sunday means there are only two remaining undefeated squads. OSU is 15-0. Penn State is 14-0. Seth will take us deeper over the next few weeks, but the Nittany Lions look as good as ever. They’ll be going for their eighth (!!) title in nine years at the NCAAs — wrestled in Pennsylvania! — and their closest dual so far this season was a 24-13 slugfest with a top-20 Wisconsin team in which PSU trailed with four bouts to go but closed with four top-four guys (in other words: not really in that much doubt).

Still, these Pokes just touched off their first perfect regular season since 2005 and have six wrestlers ranked in the top seven. It’s still a long shot of course — even though they pounded No. 3 Iowa — but weird, bizarre things happen with the chips down in collegiate postseason events.

2. What if Boynton’s hole is too deep?

I’m not talking about this year. I’m talking about for the remainder of his career. Hear me here, I’m a Boynton believer. I think his combination of charisma in recruiting, in-game coaching and healthy lifestyle portend for a long, successful career coaching college hoops. But there’s now another side to that argument. In a vacuum, getting rolled by 39 in any conference game is worse than a bad defeat, it’s embarrassing.

I get the context of it. I get how many players have been kicked off the team. I understand all of that. And I think all the assets Boynton has coming for 2019-20 will be terrific. But at some point, you run out of time, and a continual flirtation with “the worst loss in OSU basketball history” has to be shortening his runway at least a little bit. At the very least it means that there’s much less room for error in Year 3 and Year 4 than there was before.

This season has gone worse than even the most pessimistic among us could have imagined, and while I still think Boynton can and will thrive in Stillwater, the question that middle part of his tenure erased is now back in some form now: What if the rebuild job is just too much?

3. What if Tylan or Chuba (or both) have just scratched the surface?

I brought this up last week in my seven storylines piece, but wanted to reiterate with some #numbers and #data.

Player A is James Washington.
Player B is Tylan Wallace.
Player C is Justice Hill.
Player D is Chuba Hubbard.

What if … both of these guys get *looks both ways in empty shed* a lot better in Year 3?

Matthew Wolff and Viktor Hovland have played the same event 5 times this season. They're 2-2-1 against each other.

We love to get caught up in hype and cultural disruption, but one of my favorite things about golf and covering golf is that you are what your score says you are. And Hova’s score has said he’s been better than Matthew Wolff — at least in the five events they’ve played against one another — so far this season. Not as good as. Better than.

Hova is also the reigning U.S. Am champ and will get shots at both Augusta and Pebble Beach for the U.S. Open (and where he won the U.S. Am!) in the next few months. Wolff’s skillset is not of this world, and if you have to pick a chosen one between the two, he’s always the pick. But I do think Hova has a chance to be a Bill Haas or Brandt Snedeker where you look up after a decade and he has six or eight or 10 wins.

5. What if Spencer isn’t the second coming?

All fall as I painted myself into a corner graffitied with Spencer Sanders’ mug all over both walls, the question that kept scratching the back part of my brain was this one. It seems obvious that a Mr. All Everything Texas Forever QB from the DFW area would easily assimilate an already-prolific offense and make it that much better, but there’s at least a chance that doesn’t happen. Then what? 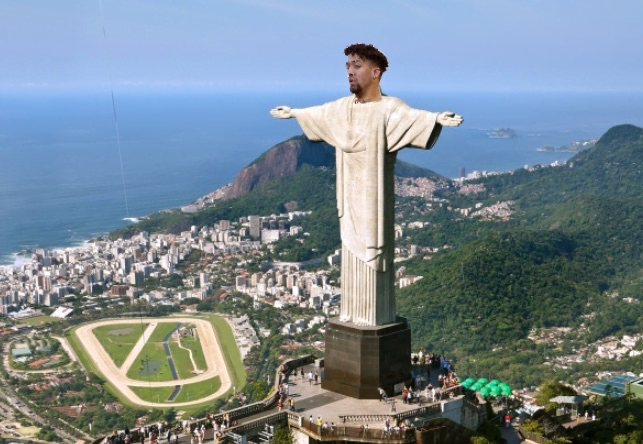 It’s no secret Gundy has been buoyed by all-universe QBs in his time in Stillwater — and that’s to his credit — and maybe if the S.S. 3 doesn’t work out then Dru Brown can keep the ship afloat for a year, or maybe Brendan Costello is better than all of them. But there are a lot of eggs in that Sanders basket from every party remotely affiliated with the program. I hope it goes well. But … what if it doesn’t?