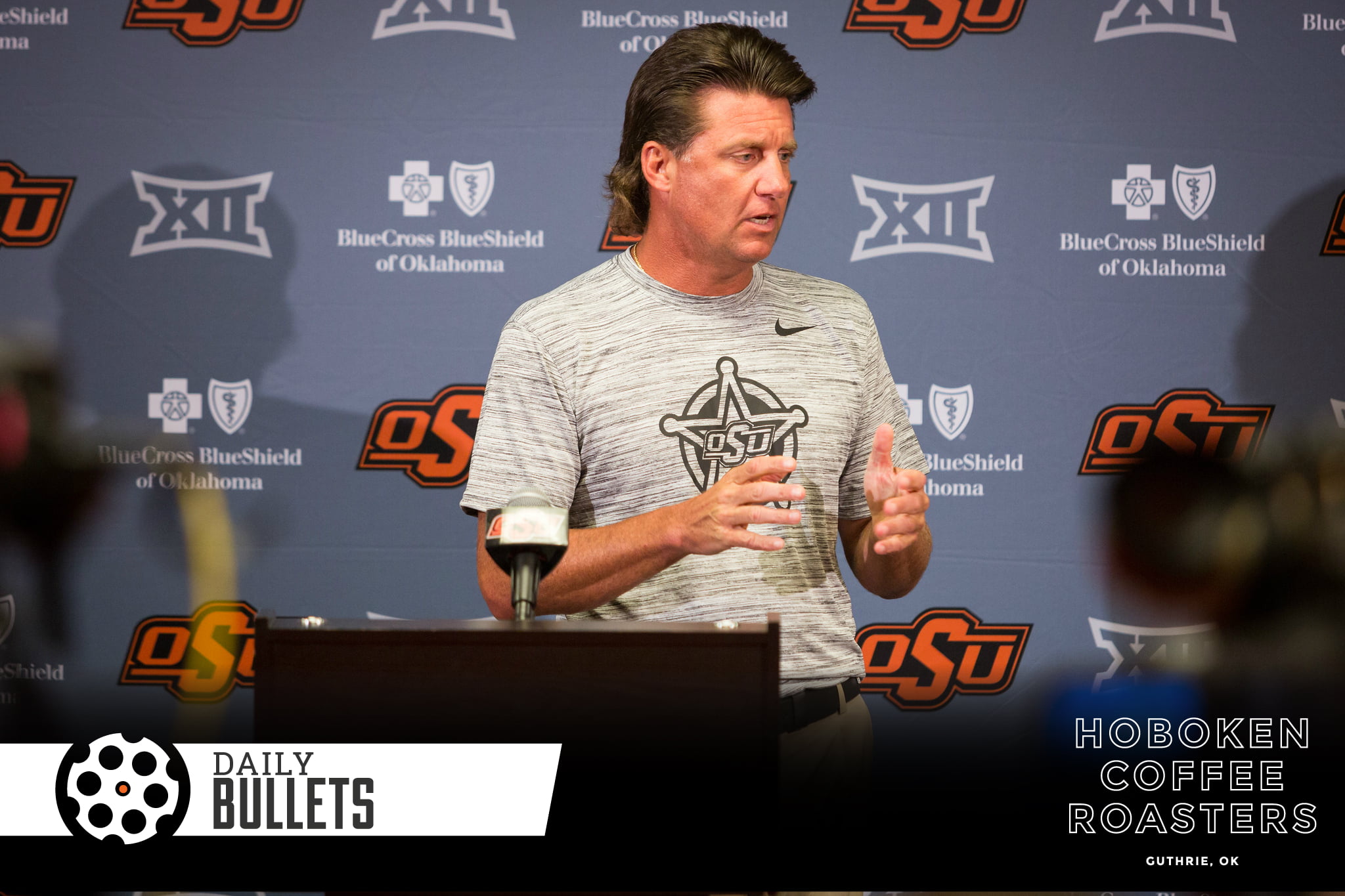 A quote I’ve been chewing on this week isn’t for the faint of heart this morning, pulled from a classic Vietnam flick I saw recently. The idea expressed can immediately be applied to conversations.

“Hell is the impossibility of reason.” – Chris Taylor, “Platoon”

Schools like Mizzou and Nebraska chose long-term stability over better cultural fits and the possibility of competing for conference championships. It says something that while having a network and what appears to be stability, OSU and the Big 12 teams are better off. “Better off” in the sense that not only is it better not to have a Friday night game against Cal but also better paydays.

• Most Viewed (No. 2): Five Observations from OSU’s Spring Roster

This touches on something featured prominently in the Bullets yesterday – the hunger to hear more from the football program, inspired by comments from program mouthpiece Bobby Allen. With no shortage of examples noting coaches who have had multiple pressers since Gundy has had one, fans are left to parse meaning and read the tea leaves from the smallest output from the program: a spring roster.

• Most Viewed (No. 3): JD King Arrested for Disorderly Conduct

This appears to be the classic example of how sometimes it’s good to get away from home. King had zero issues (at least that we know about) over two years in Stillwater but not two semesters at home and he’s averaging a half a misdemeanor per semester. Here’s to hoping it’s a blip on the radar for the Georgia native as he sits for a year.

• Most Viewed (No. 4): Mike Gundy Won a Dance Off Against a Radio Host

Mike Gundy did “the Gundy” while (it appears) he was on vacation in Nashville with his wife and some staffers, reveling in the spotlight that follows him. He’s a walking highlight reel, a born-entertainer that can be an absolute blast to follow. Gundy’s feel for the news cycle and embracing his national image continue to draw eyeballs to the Oklahoma State program.

Something our wrestling writer Seth mentioned this week in the PFB podcast was the unique timing of this match (at the end of the season) has brought a unique spotlight onto the match – the eyes of the wrestling world are on Stillwater. Beyond that, if you were to zoom in on the lineup cards, Fix-Desanto is an intriguing matchup of OSU’s strong silent-type and Desanto, the Baker Mayfield of the wrestling world.

• It sounds like people who value their time are more contented

• Here was a solid thought on “reading in a distracted world“, the differences in the types of reading:

Horizontal reading rules the day. What I do when I look at Twitter is less akin to reading a book than to the encounter I have with a recipe’s instructions or the fine print of a receipt: I’m taking in information, not enlightenment. It’s a way to pass the time, not to live in it. Reading—real reading, the kind Birkerts makes his impassioned case for—draws on our vertical sensibility, however latent, and “where it does not assume depth, it creates it.” [The Paris Review]