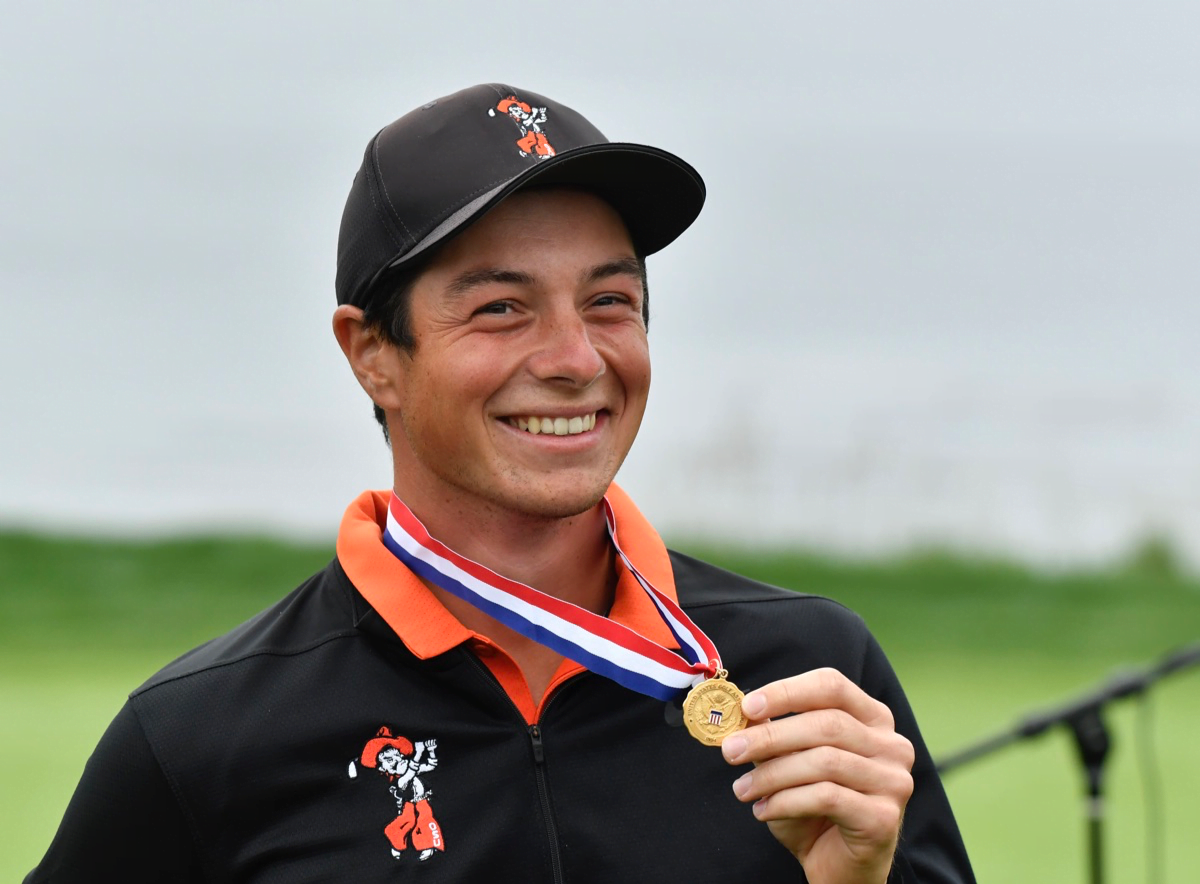 PEBBLE BEACH, Calif. — Viktor Hovland set the all-time amateur scoring record at the U.S. Open on Sunday at Pebble Beach when he fired the third-best round of the day with a 67 to get in the house at 4-under 280 for the week.

It was an eye-opening performance — even for Hovland — as the former Poke finished T12 and beat Tiger Woods, Jason Day, Matt Kuchar, Rickie Fowler, Jordan Spieth and Dustin Johnson.

The way he did it was even more eye-opening. Hovland led the field in strokes gained off the tee, and it wasn’t even close. For 72 holes Hovland averaged 297 yards off the tee and hit a tournament-leading 84 percent of fairways. Basically, he lets it go and it’s straight as hell. Brooks Koepka once said the harder he swings the straighter it goes. Hovland was the embodiment of that this week at Pebble.

Look at the company he kept with his driving statistics on a week when he finished as low amateur in the field. Rory, DJ, Brooks … and he mopped the floor with them all off the tee. His swing (as you can see below) is a little unorthodox — although not as unorthodox as one of his teammates — but the speed he generates is undeniable. And his position at the top is very DJ-like. 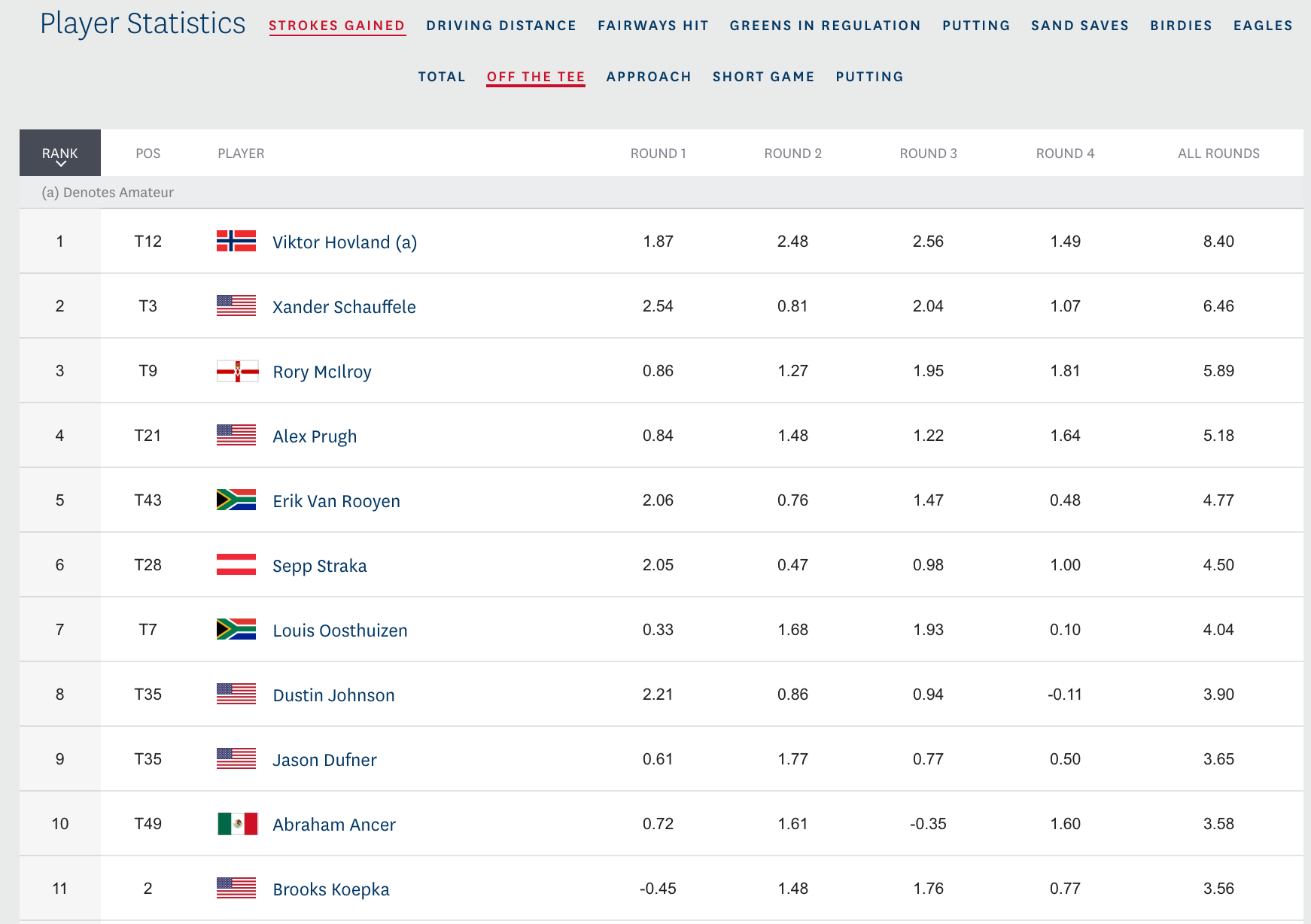 It was the perfect ending to a remarkable (and maybe remarkably underrated) amateur career. Hovland ended his amateur days with his coach Alan Bratton on the bag, and as they walked one final time (after so many times) up the finger of land just off the Pacific Ocean and Hovland made one final birdie for $0, he thought of where he’s been and where he’s going.

“Coach has now caddied for me at the U.S. Amateur last year, the Masters, and now this week,” said Hovland. “And I’ve had the three best years of my life at Oklahoma State. I’ve learned so much not only as a player but as a person, got to meet so many cool people and just kind of gotten to learn about the culture around it. It’s been really cool, though, just to have him and Coach [Donnie] Darr and just all the guys on the team with me, supporting me. So that was a cool walk.”

How cool is this?

DJ on the left, Hovland on the right 👀 pic.twitter.com/fpuxyZDrcP

And now, after an unbelievable year that included a U.S. Am win at Pebble and sliding in as low am at the Masters and the U.S. Open, Hovland will make his pro debut this week at the Travelers Championship in Connecticut alongside former teammate Matthew Wolff.

“It’s obviously cool to perform such a thing,” Hovland said of his U.S. Open show. “And I hope that this will feed or I can feed off of this going into my professional career and do more things like this and be in contention of winning tournaments.”

Hovland will be in contention for plenty of tournaments during his time as a professional. But I’m not sure anything can ever compete with the memory of walking this track with that score during the best years of his life. Augusta is a special place. Pebble is, too. And Hovland has lit them both up over the last few years. As the sun set on the 119th U.S. Open, its best amateur and the best amateur in the world shed the (a) and moved on to the next phase of his life. I hope for him it’s half as good as this one was.

What does @OSUCowboyGolf's Viktor Hovland have to say about breaking a Jack Nicklaus-held #USOpen record?

NCAA Looking to Crack Down on Fake Injuries in 2020, or Else