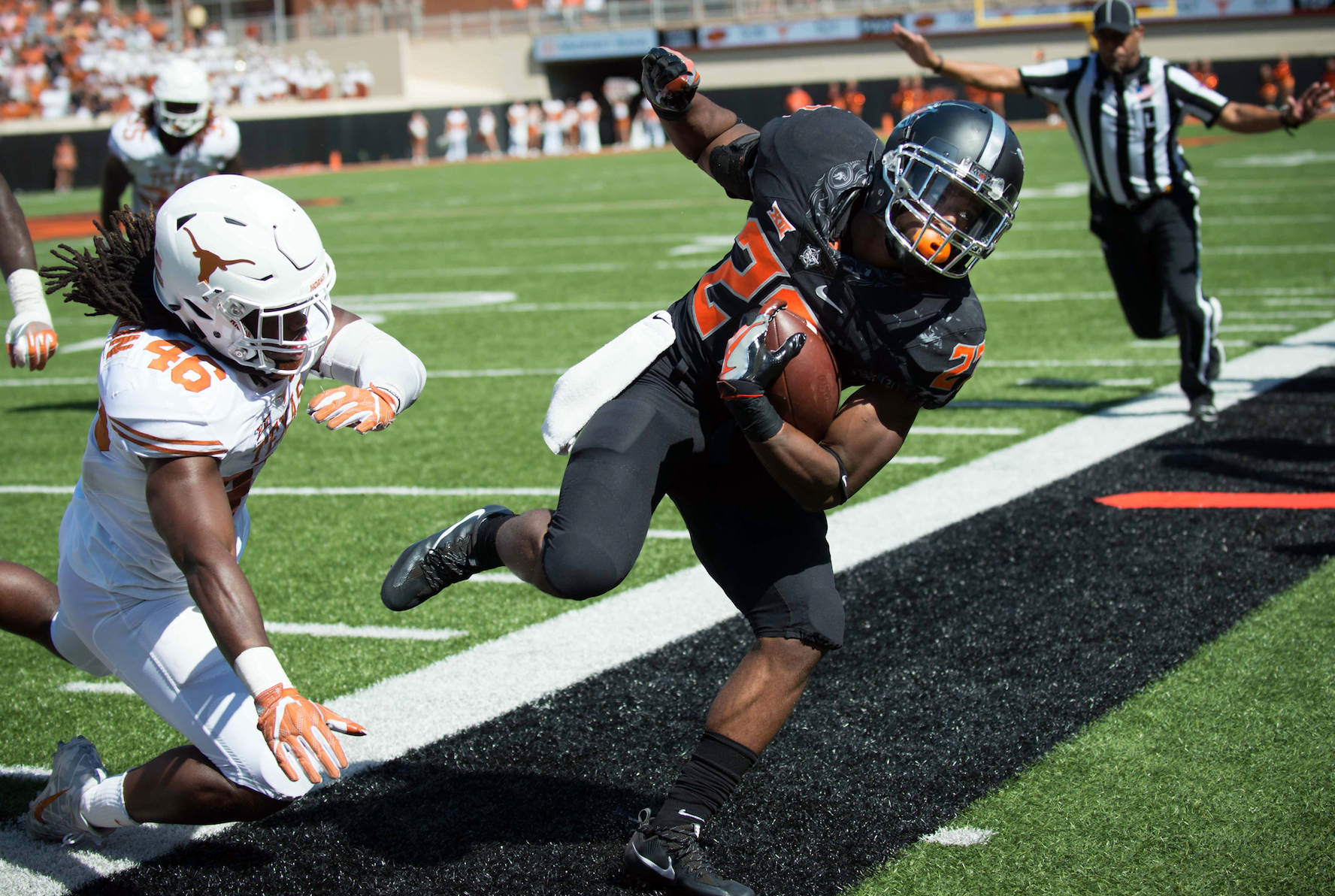 The Preseason All-Big 12 results are in, and four OSU players—three on offense, and one on defense—have been named to the list.

Oklahoma State wide receiver James Washington, running back Justice Hill, offensive lineman Zachary Crabtree and safety Tre Flowers were all included on the team, with Washington being one of only three unanimous Big 12 preseason selections.

The Pistols Firing team was granted a preseason vote this year, and as a show of transparency, we’re posting our ballot—along with our explanations—in the post below. Let’s get to it.

Our bias showed from the very beginning! We had Odell Beckham-Jerry Rice-Rob Gronkowski hybrid Tyron Johnson as our Newcomer of the Year. Will Grier of West Virginia ended up being the media consensus. Baker Mayfield and Dorance Armstrong were pretty easy choices for POY (more on them in a minute).

The defensive line and linebackers were pretty easy to pick. As far as production, there’s a clear-cut Tier 1 headlined by KU’s Dorance Armstrong, who notched 10 sacks last season, and OU’s Ogbonnia Okoronkwo, who had eight of his own and was a force off the edge.

The defensive backs is where we argued—outside of Flowers and Thomas, defensive back production can be deceiving. Not all pass deflections and interceptions are created equal. But we went with Kamari Cotton-Moya, D.J. Reed, and Nick Orr—the latter of which had his production sliced because of a move to linebacker last season.

For punter, the media consensus pointed to Texas’ Michael Dickson, but people are quick to forget how good Sinor is. He has his own Heisman campaign after all. Sinor was the only slot in which we differentiated with the media consensus.

Among our team, there was a consensus that Mayfield took the top spot at quarterback. Given his production and his 2017 projection, we felt he was the best choice, slightly edging out Rudolph for the top spot on our ballot.

You might hate him, but setting the FBS single-season pass efficiency rating record and ranking first nationally in completion percentage (70.9) and yards-per-pass attempt is tough to argue with. Plus, he was a Heisman finalist. There was actually a faction in our camp arguing for Rudolph because the majority of us think he’s actually the better player and pro prospect, but we couldn’t in good conscience put him ahead of Mayfield (as much as we wanted to).

Running back Justice Hill and Justin Crawford were also consensus among our team, with Baylor’s Terence Williams getting consideration as well. The wide receivers, too, were fairly easy choices for our team as well, with Washington and Lazard being the clearest candidates for first-team consideration.

As far as the linemen go, OU’s Orlando Brown, West Virginia’s Kyle Bosch and Texas’ Connor Williams are locks to eventually play at the next level. We added Austin Schlottman and Dalton Risner based on last year’s production.

The only place we differentiated with the media consensus on offense was, ironically having Bosch over Zach Crabtree as well as Dimitri Flowers instead of Winston Dimel.