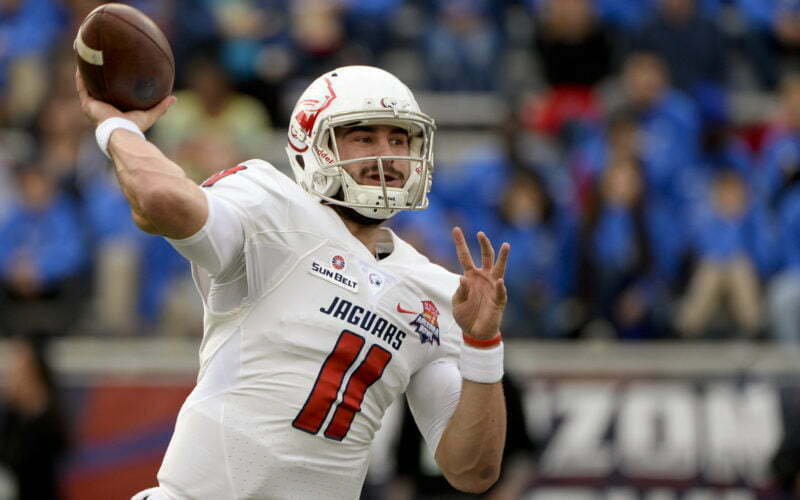 It’s one of the most endearing sentiments in sports. David and Goliath. Any given Saturday, the weak can prevail. The unassuming can ruin things for the destined.

So it should come as little surprise that there’s been a slight buzz around Oklahoma State’s trip to Alabama this September. Not that Alabama school. Not that one either. South Alabama. The team that beat Mississippi State last year. The same program that played Tennessee close a handful of years ago.

Could the Jaguars follow in the footsteps of their conference and in-state rival Troy? Let’s take a look.

This is the first meeting between Oklahoma State and South Alabama which added football in 2008. It’s only been an FBS program since 2012.

We will get a good look at the Jaguars during opening week when they head to Oxford to face an Ole Miss program whose off-the-field turmoil shouldn’t stop them from hammering the Jags.

In 2016, sophomore Dallas Davis took over as the Jaguars’ starting quarterback but battled with injury down the stretch. He still finished second in the Sun Belt Conference with 246 passing yards per game.

Davis sat out the spring due to shoulder surgery and his best shot appears to be an “open competition” if he’s on schedule to vie for reps in fall camp. He’ll compete with fellow junior Cole Garvin and former UAB quarterback and teammate of Victor Salako’s, Evan Orth.

Regardless of who takes snaps for the Jaguars, they will be replacing virtually all of their targets in the passing game. The top four receivers in 2016 were seniors Josh Magee, Kevin Kutchera, Tyrone Williams and tight end Gerald Everett. Those four represented 2,404 of the Jaguars’ receiving yards in 2016. In fact, 81 percent (2,579) of South Alabama’s 3,169 passing yards were collected by seniors last year as well as 13 of their 15 receiving touchdowns.

The Jaguars do return leading rusher, Xavier Johnson who had 831 yards and 10 touchdowns a year ago. Johnson has led the team in rushing the last two years and boasts career totals of 2,225 yards and 17 touchdowns while averaging 5.9 yards per carry.

South Alabama did finish second in their conference in passing defense, allowing just 174.6 yards per game and a 1.4:1 TD-to-interception ratio.

But let’s not kid ourselves. The Sun Belt is not the Big 12 and the most prolific passing attack they faced was Troy. The chasm in skill players between Oklahoma State and the Troy Trojans is more embarrassment than mismatch. Oh yeah and the Cowboys have a legit Heisman contender in record-setter Mason Rudolph taking snaps.

Jeremy Reaves is the veteran leader of the Jaguars’ secondary and returns after a junior season with seven pass breakups, three interceptions, 5.5 tackles for loss and two forced fumbles. He and fellow senior DB Neiko Robinson (three pass breakups and an interception) will have their hands full with what should be the most prolific offense the program has faced in its eight-year history.

The simple question is whether the Cowboys take it to the Jaguars or play down to their competition like we’ve seen in the past. The Jaguars beat a bad Mississippi State team last year. Does that put fear into Mike Gundy? Unlikely. But there’s no reason to go mess around with a lesser team on the road.

This is another game that the Cowboys should control throughout. I’m predicting OSU makes it to 2-0 after a 52-21 win in Mobile.