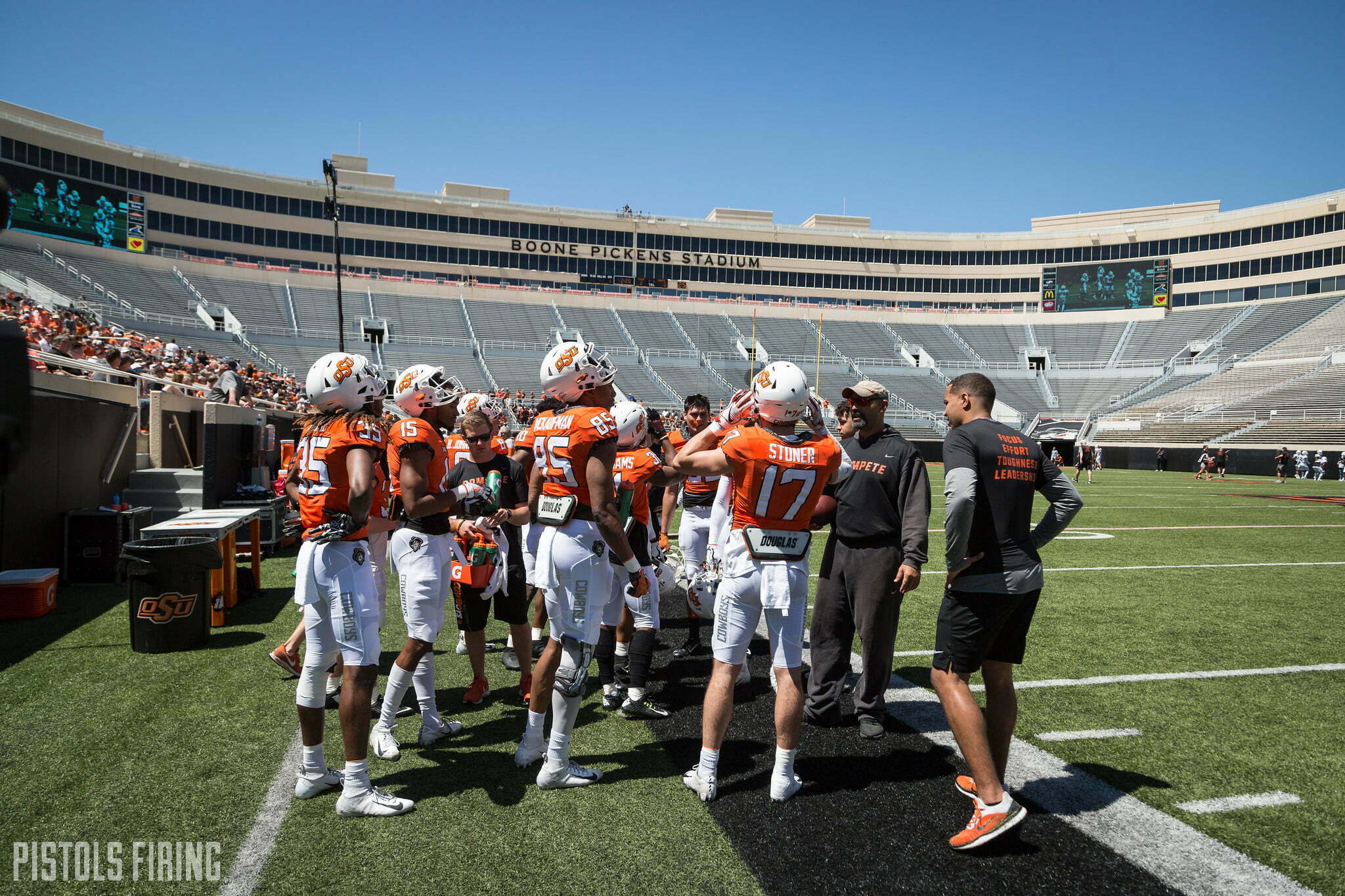 Spring has come and gone, and with it our one chance to (sort of) see Oklahoma State football in action between the offseason bookends of Mizzou in Memphis and Oregon State in Corvallis.

So what did we learn? Well Marshall Scott was in attendance all spring and is updating you on a position by position basis, but I wanted to take a few minutes to discuss what OSU’s starting 11 might look like offensively come August 30.

This is all projecting of course based on last year, what little we gleaned from this spring and what I think the future will hold, and there’s probably nothing more futile than trying to predict what a set of college athletes will be doing four months from now. But it’s the end of the school year, and the golf and baseball teams have yet to embark on the postseason so I thought we could try and have a little fun with it.

Here are my predictions for OSU’s starters to open the 2019 season.

No surprise here. I already laid out the case for No. 3 to start in August, and I don’t think much will change between now and then. The QB derby will drag through the dog days and on into the start of school. But the guy who trots out on the field for the first series of a new era will be the one we suspected all along.

Gonna be tough for Deondrick Glass to win that Heisman if he can’t crack his own backfield off the top. I respect the confidence though. Also if you’re betting on which OSU player will go highest in the 2020 NFL Draft (and why wouldn’t you be?) I think No. 30 is the right value play.

You want Moore to only play 40 plays a game? Fine. You want to slide Stoner to the outside and let Landon Wolf take his spot at times on the inside? Cool. You want to toss Braydon Johnson out with Wolf, Stoner and Wallace for OSU’s version of the Hamptons Five? Great. But based on the FGOTB* Rule, No. 35 must take the field first, even if he doesn’t see the lion’s share of snaps as WR3 or WR4. As an aside: In looking up last year’s starters it finally hit me how much I’m going to miss Tyron Siren (who started all 13 games last season) this year in Stillwater.

*First Guy Off The Bus

OSU is maybe deeper at Cowboy Back than any other position? Can’t say I saw that coming. Jelani is kind of secretly the most interesting pro prospect on the roster, and Gundy seems intent on letting the racecar out of the shop a bit more in 2019.

“Jelani should develop into a really nice player for us this year,” Gundy said after the spring game. “He’s one of the guys we talked about last year, and if you remember, I said he’s probably a year away from starting to show up consistently. He’s now starting to show up.”

This doesn’t deviate a ton from the end-of-2018 starting five up front for Oklahoma State. Keyes, Wilson, Schneider and Jenkins all started at points in 2018, and redshirt freshman Bray has been getting rave reviews since he stepped foot on campus.

If he does start and plays a lot, he’ll be among some special company, as Bill Haisten recently pointed out.

If you’re reading between the lines — literally in this case, as I look at the depth chart from last season’s bowl game — it’s easy to envision Tyrese Williams (RFr.) and Dylan Galloway (RJr.) as the primary backups. What will be interesting is seeing which of the other youngsters — Hunter Anthony? Hunter Woodard? — will join them as new OL coach Charlie Dickey tries to create a rotation to protect OSU’s new franchise at QB.