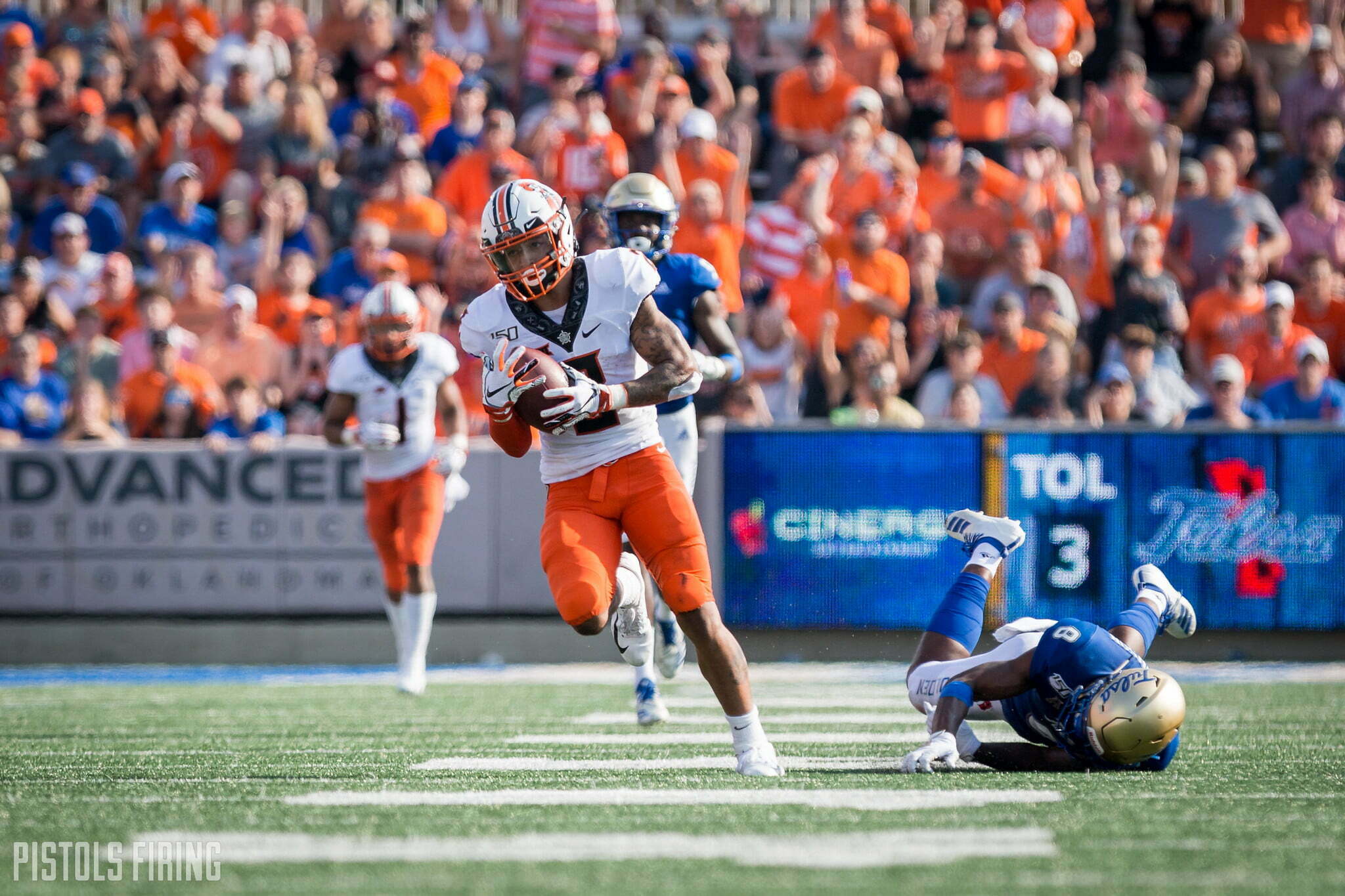 If Tylan Wallace would’ve decided to pursue an NFL career after his junior season, he would’ve went down, statistically, as a top-10 receiver in Oklahoma State history.

However, the one often referred to as Superman, is back for his senior season after ACL surgery. The Cowboys’ season being 10 games makes it unlikely Wallace can catch Rashaun Woods’ or James Washington’s career records, but 10 games from now, Wallace has a great shot at being a top-five receiver in a program with a long list of great receivers.

For each I’ll have the current top five in program history listed, as well as Wallace’s current standings and his projected finish in italics. The projections are based off Wallace’s past two seasons and multiplying his per game averages by 10.

To start, I did not expect to see Josh Stewart that high on the list. He is definitely one of the most underrated guys in OSU’s history.

Wallace already being 10th on this list is quite impressive when you take into account he caught only seven passes as a freshman, playing behind James Washington and Marcell Ateman. Then add to that, Wallace played only nine games this past season.

It looks as if Wallace is in a good spot to finish top five on this list, needing only 34 snags in 2020 to catch Stewart, but it will be tough for him to catch Dykes. Wallace would need 78 catches. He had 86 in 2018, but he also played 13 games that season.

If Wallace would’ve played a full 2019 season, odds are he would already be top five on this list.

Throughout his career, Wallace has averaged 17.21 yards a catch, good for third in program history (60-catch minimum) behind James Washington (19.79) and Adarius Bowman (17.22).

There have been 16 1,000-yard seasons in OSU history, and Wallace would have to put up the 17th to join the top three in career receiving yards and, again, do it in only 10 games.

It’s doable, though, as Wallace has averaged 108.82 yards a game the past two seasons, so if he can shoot that average, he’ll pass Blackmon on this list.

This list is the one that Wallace feels furthest from the top on.

Even if Wallace hits his projections in 2020, he’ll go from a three-way tie for sixth (with D’Juan Woods and Adarius Bowman) to a tie for fifth with Dez Bryant. Those are all awesome names to be associated with, though.

It’s unlikely Wallace will go down as the best receiver (statically or otherwise) in program history, but that was always quite the tall task.

All things considered (didn’t play much as a freshman, got injured as a junior, shortened senior season), Wallace’s numbers are nothing to sneeze at. Career statistics don’t mean everything, as I imagine the general consensus is that Justin Blackmon is the best receiver to ever do it at OSU, but by the end of 2020 there won’t be many names mentioned before you get to Tylan Wallace.