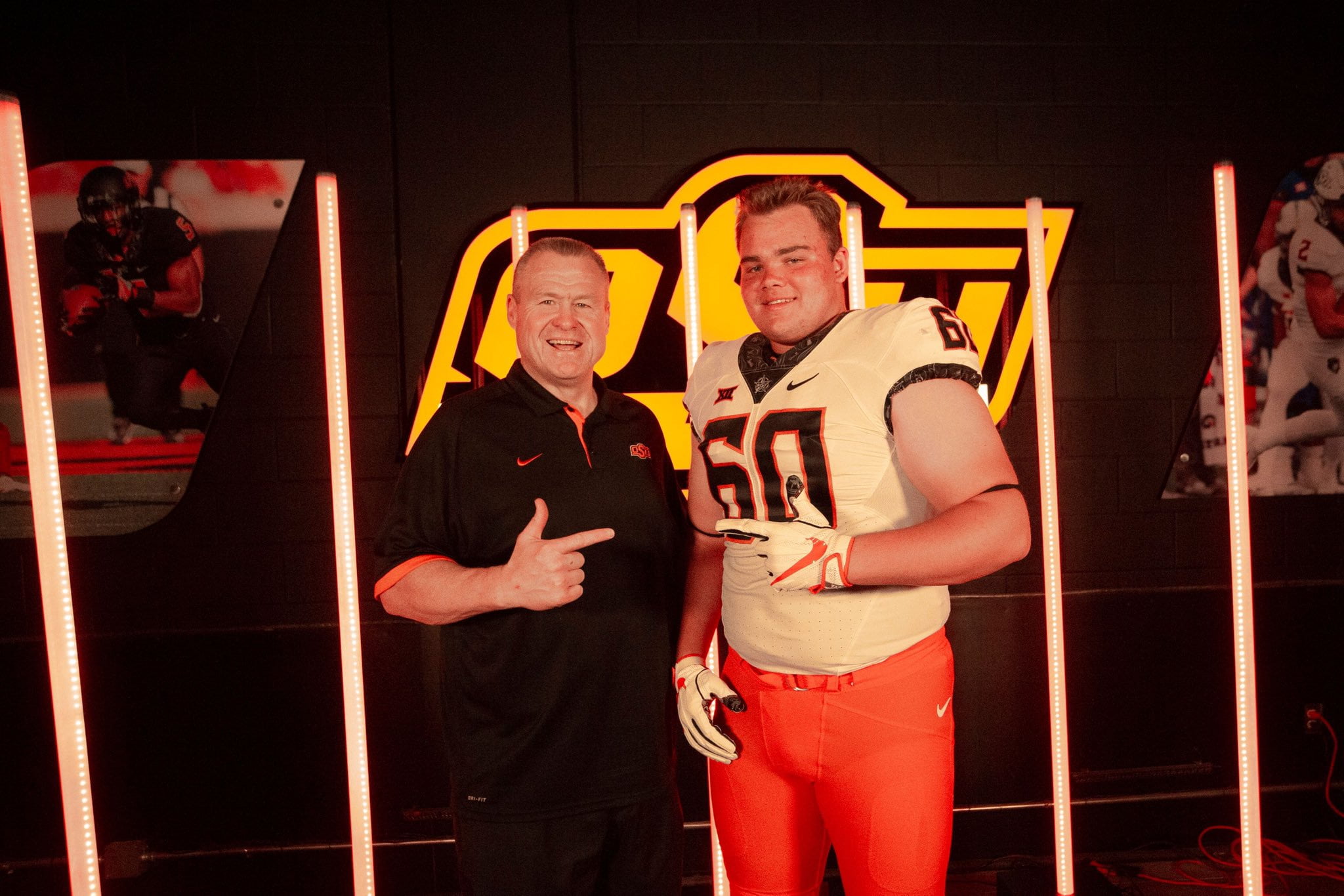 A few weeks back, we highlighted Cade Bennett’s ridiculous film from early in his senior season, and that led us here.

I got on the phone with Bennett Thursday, and we talked about what made him chose Oklahoma State over staying in his home state of Arizona, how he loved pummeling his foes before he loved football and a cool thing Arizona football is doing with its top eight teams regardless of class.

I’ll let him get more into that, but I think Oklahoma should do something like it.

Marshall Scott: You had offers to stay closer to home, so what sold you on Oklahoma State?

Cade Bennett: I never was directly feeling connected to the in-state schools. They have good things going for them, but just overall, I never was fully there.

Honestly, the whole recruiting process, I was just looking for what everyone talked about like when you go somewhere, you’ll just know if it’s your place. When I went to Oklahoma State, I visited probably dozens of schools before then, I showed up and I knew. I was like, ‘Welp, recruiting is done for me.’

It’s just different people there. There’s a different kind of football played there than anywhere, in the Pac-12, as well. It has everything.

Marshall Scott: Had you ever been to Oklahoma before?

Cade Bennett: That was my first time ever, actually on that visit.

Marshall Scott: What are some of the differences that you noticed just from people, environment between Arizona and Oklahoma?

Cade Bennett: Obviously Stillwater is a lot smaller of a place, but everyone there is extremely nice. I actually went to Hawaii this summer, and some people just so happened to recognize me. They were wearing Oklahoma State stuff, and they recognized that I was Cade Bennett the recruit. It’s just different. The fans and the people there are extremely kind.

Marshall Scott: OSU offered you after a lot of other schools, so how was Charlie Dickey able to do more in less time?

Cade Bennett: Dickey is just a rare kind of coach. I have been in contact with many coaches throughout this whole process, and Dickey’s just got something special about him. You can tell he really cares about you. Before asking about football, he cares about the other stuff. He cares about how your family’s doing and real things. He’s a great man, a great coach. His resume is really impressive as well.

Marshall Scott: Recruiting sites list you as a tackle, but you play right guard for Notre Dame Prep. Are you a guy that’s comfortable playing anywhere?

Marshall Scott: You’re one of four offensive linemen committed for OSU’s 2020 class, I talked with Eli Russ a few weeks ago, and he said you guys talk quite a bit. What’s that relationship been like with those guys, especially considering you probably didn’t know much about those guys before?

Cade Bennett: It’s great. I’ve gotten to know them over the course of the past couple months, Eli, Trent (Pullen) and then recently Monroe (Mills) committed. They’re guys I’d love to play with. I’m excited to have them as my friends, and I’m excited to build that relationship more once we go up there.

They’re the right type of people. They want to work hard. They want to compete. We have the same aspirations, so it’s good people to be around.

Marshall Scott: How did OSU first get on your radar? Did Dickey reach out? Or were you reaching out? How’d that all work?

Cade Bennett: Actually, Coach (Josh) Henson, when he was the offensive line coach, he came and watched me work out in, I want to say, December of last year. He was talking to me and all this stuff. I believe he had this resume where I needed to be a certain height. I’m like 6-4.5, and he needed me to be 6-5 or something. So he didn’t offer me, which kind of rubbed me the wrong way at first.

Coach (Robert) Luce was following me throughout this whole time. I believe he’s the one who found my film and everything. So, even when Coach Henson was the coach, they were still in contact with me, sending mail.

Then Dickey took over. About a month or two after he took over, they offered. I believe I was actually the first offensive lineman to be offered once he took the job.

Marshall Scott: In a lot of your highlights, you end up on top of somebody. Where did you learn that nastiness or has it always been a part of your game?

Cade Bennett: I think I actually loved that before I started loving the game of football, as weird as it sounds. As a kid, I wasn’t really into flag football. I played it, but it wasn’t my thing. I wasn’t really a fan of it and everything. But once I started playing tackle, I realized that my size and my strength could help me succeed in the sport.

I just kind of use it as a way to vent. You’re not getting in trouble for hurting anyone on the football field. The name of the game is just mauling people as a lineman. I love it.

Marshall Scott: If somebody only watched you play football, they’d probably think you’re a pretty mean dude. Is that who you are off the field?

Marshall Scott: Notre Dame Prep, you guys are unbeaten right now. What are some of your goals for your last year of high school football?

Cade Bennett: We’re gonna try to take the conference championship. There’s a chance we could get put into the top eight, as well, the open division. It’s a new thing in Arizona this year. Either way, if we get in that or we’re in 5A still, I just want to win it all. We’ve gotten so close the past few years, I think it’s finally time. Our senior class is really something special. We’ve got four DI commits, so we’re a pretty good class, maybe one of the best classes to ever come out of Notre Dame.

Marshall Scott: You mentioned that open division, can you kind of take me through that? Oklahoma doesn’t do anything like that.

Cade Bennett: Yeah, it’s pretty sweet. We’re a really small school. We’ve only got like 900 kids compared to other schools with 3,000, but we could compete with them. I wouldn’t be scared to do any of that. I’d be happy. It’s just better competition to be honest.