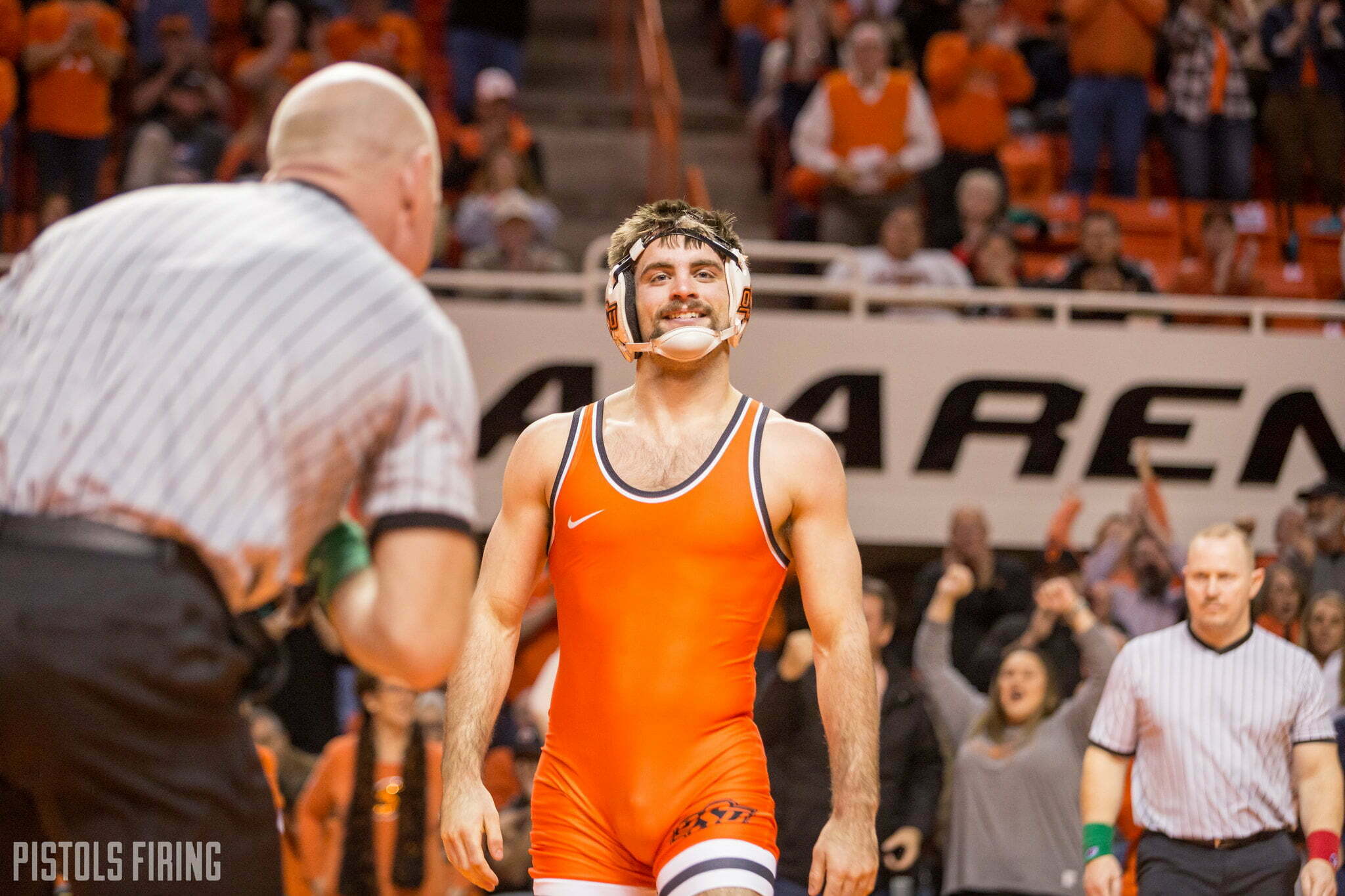 I recently sat down with former OSU wrestler and two-time All-American Chandler Rogers, who is now the director of operations for Air Force wrestling and continuing to pursue a career in Greco-Roman wrestling.

Sarah Wettemann: Life after OSU, what’s that been like, how did you end up working for wrestling at the [Air Force] Academy?

Chandler Rogers: It kind of just all came together, where right after the season I wanted to do Greco and I was just looking around at a lot of different schools and places that I could go and talked to the Olympic Training Center. They said they had some top-notch guys there that were training Greco and that they could really help me out and I believed that.

The thing that was hardest about that was that they didn’t have the finances we needed in order to support me and my wife. So Matt Leland and Coach Barber they started talking and they found a position here as director of ops and that let me work with the guys twice a week and dip my toes into the coaching realm. It really worked out great and that was kind of just the way it worked out.

SW: What was it like training under John Smith and did that have any impact on your aspirations as a wrestler?

CR: You know when I was in high school and I had coaches tell me what to do it was kind of like, “Oh yeah they don’t really know what they’re talking about, they’re high school coaches.” But when you had John Smith tell you what to do you’re like, “I probably should listen because he’s a six-time world champ.”

He’s probably got something good to say and it was just kind of different because you took him real serious and he expected greatness. We would do everything we could in a match, it didn’t matter in our minds if we had a great match, coach Smith would point out what we did wrong so we could change that. It was cool being part of a program that’s … really analytical about your wrestling and they want to perfect your sport for you, it was really cool

SW: Competing in Gallagher Iba and being a part of the Cowboy culture has a huge impact on everyone that gets the opportunity to experience it. How has it impacted you even after graduation?

CR: Just makes me real grateful for the opportunity to wrestle at Oklahoma State because you know not every athlete gets the opportunity to compete in front of 15,000 people at Gallagher-Iba for a few duals a year. To be able to win in that environment too, it’s something I’m very proud of, it’s a different aspect of the game.

SW: Last time Oklahoma State faced Air Force you were obviously in a much different scenario, what feelings do you have with the dual against OSU in the near future?

CR: I’m excited because I get to see a lot of my friends but I also get to see the guys I’ve been working with go out and compete. I’ve been working with those guys on things they can do against Oklahoma State guys because I know those guys. I keep in touch with those guys too and I tell them, I’m like, “Hey I’m telling them all your secrets you better be ready.” So, it’s gonna be good, I think, I’m excited I love Oklahoma State and I love Air Force so it’s just going to be a fun dual to be at.

SW: How did OSU prepare you for training for the Olympics in addition to your new position at USAFA?

CR: Oklahoma State really taught me what hard work looks like and whether or not I’m doing enough and to be critical of myself. And I think to be great you gotta criticize yourself, challenge yourself and be honest with yourself whether you’re doing enough or not. That’s really what Oklahoma State did for me was they taught me to be serious and to understand what it’s all about.

SW: What has been the biggest challenge in the transition from NCAA competition to an international stage?

CR: You know you really gotta take responsibility for your own training, and that’s probably the hardest part. I don’t have somebody that’s going to be getting on me about  doing things. and I don’t have people barking on me to work harder or do things like that, I have to do my own diet. I have to go work, pay my own bills, do those things, feed myself. These are all things I had given to me in college so now I have to work for those things, I have to take care of my own success.

SW: How did missing the postseason after a wrestle-off against Joe Smith motivate you to become a better wrestler?

CR: You know, after that wrestle-off I was pretty disappointed. I had to change my mind … I didn’t want my time on that team to end. I wanted to go and coach those guys and help those guys out. The way it helped me go … into training for the Olympics was like I was watching these guys wrestling and I knew that I wasn’t done. I needed to give it another shot so that was what really motivated me after that. After I lost that wrestle-off, if I would’ve won that wrestle-off I don’t know if I would’ve wrestled after it but since I [didn’t win it] I’m trying to continue my career.

SW: Daton Fix, Alex Dieringer and Jordan Oliver all competing for spots on the Olympic team, do they have any impact on you and how you pursue the same dream?

Yeah, a little bit … Its fun seeing other guys that I wrestled on teams with do that but I’ve kind of changed my mindset to I’m doing this for my family, I’m doing this for my faith. Those are the things that really drive me to win now, not really the OSU legacy. It is cool and that is one of the expectations for OSU guys is to be on the Olympic team so yeah in some ways it is but mostly it comes from personal drive.

SW: What’re you looking forward to coming up in the future?