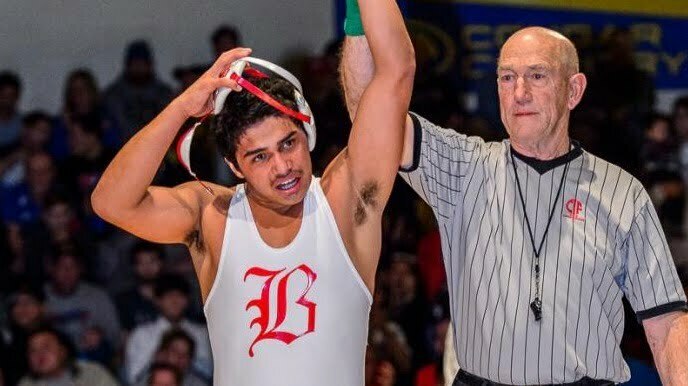 I spoke with incoming 2018 recruit Anthony Montalvo of Buchanan High School in Clovis, California recently about a variety of topics. Montalvo is the No. 8 wrestler at 182 in high school and will join Travis Wittlake and Jalin Harper on campus this fall.

Here’s what he had to say.

On what sold him on OSU: “The name man, it’s OSU, the godfather of them all. This is the school.”

On his first interaction with John Smith: “I got a call from John Smith. He’ll probably tell you, I choked up. He told me his name and I froze. He was like ‘are you there?'”

On his energy he brings to matches: “You know it’s weird. Off the mat I’m really cool, calm, collected. I joke around a lot. I get on the mat and I see that red and somehow for me I feel more energized in the 3rd than I do in the 1st. It’s weird the way it works, but I love it. It’s my style of wrestling.”

On Redshirting: “I’m a competitor. If it were up to me I’d like to come in and try to start, but it’s a coaches decision. I’ll do whatever they feel is best.”

On how he expects the transition from Clovis to Stillwater to go: “I actually felt right at home there. I grew up in a town about half the size of Stillwater, so it was a great fit. It took one weekend to feel like home. I can’t wait to get out there.”

On when he plans to come out to Stillwater: “Immediately after graduation. I’ll be moving out right after school.”

On coming in with a highly-touted recruit like Travis Wittlake (No. 1 recruit at 170): “I’m super excited to have the opportunity to work with a guy like that that’s in my class. The opportunity to get in and wrestle with a guy like that every day. That’s something I dream of. I love that stuff. I’m convinced that if me and him see each other all the time, we can push each other to the next level.”