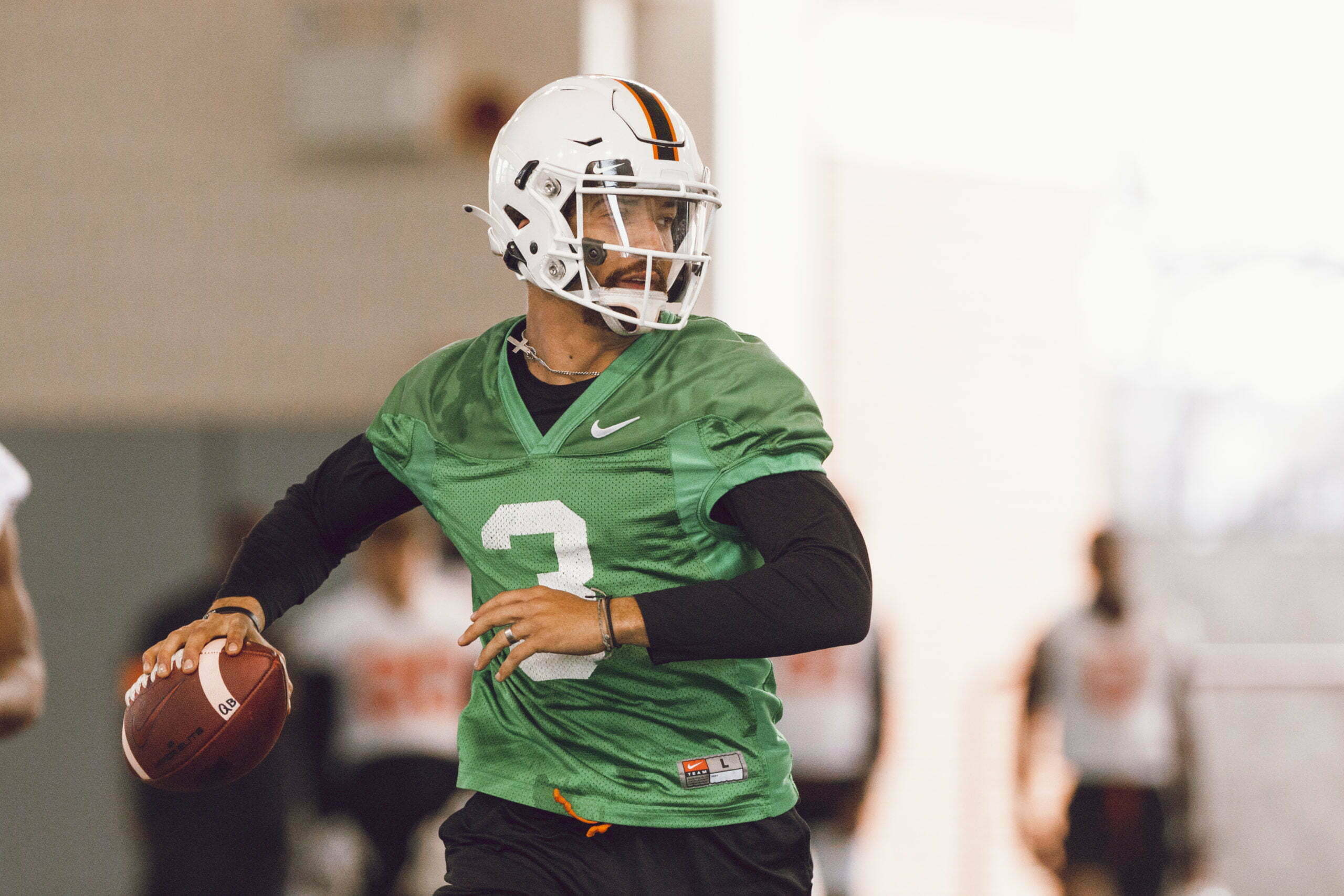 Oklahoma State’s 2020 offense did not live up to its lofty offseason expectations.

In search of culprits, one could point to scores of injuries across the offensive line and in the backfield, as well as the ensuing musical chairs.

But there will be those that point to the quarterback spot and Spencer Sanders (who was not immune to injury himself) for his decision-making in spots and a few too many turnovers.

Some have even speculated whether Sanders would be the inked-in starter coming into the spring or if it would be a full-on competition for snaps. The answer is a yes, to both.

Cowboys offensive coordinator Kasey Dunn met with media members on the Sunday, Day 1 of spring practice, and the subject of a QB competition was broached.

“All these practices are important for quarterbacks because they can always sharpen their sword a little more,” said Dunn. “The big thing we’re trying to say right now in spring ball is competition, at every position.

“So when you bring up Spencer and him trying to work his thing out it’s really, Hey man, he’s battling his ass off for that job too. We want Shane [Illingworth] feeling like he can go out there and compete and be the No. 1 guy. We want Spencer feeling like that.”

Dunn went on to say that he wants every starter, across the offense, to sweat the next man behind him. The adages abound. Iron sharpens iron. Competition breeds excellence. Just because they’re coach-speak doesn’t make them untrue. And unlike last year, OSU coaches can actually recite them with confidence.

“This year we have a chance to see a couple, two, three, four good quarterbacks step out there that we know something about,” said Dunn. “Last year we really didn’t have that luxury, and we do now.”

We can pencil in Illingworth as No. 2. Also on the roster are Ethan Bullock who played in two games last season, and walk-ons Peyton Thompson and Gunnar Gundy. We’ll have to see where the last three land in that pecking order.

Dunn was impressed with Illingworth’s progression from Year 1 to now, stating that the biggest difference is his confidence.

“He sees the field really well, it’s just a matter of sitting in there and transitioning and seeing them open, and believing it and throwing the dart,” Dunn said. “And he’s doing that now.”

But make no mistake, Spencer Sanders is QB1. He’s earned it and, more importantly, he gives the Cowboys the best chance for success as things sit now.

No. 3 has always had the tangibles but, as Marshall Scott pointed out, he made strides in efficiency and as a cerebral passer down the stretch of his sophomore season.

“I told you guys a year ago that Spencer needed to calm down and let the game come to him, relax,” said Mike Gundy on Sunday. “He did that on the sidelines. We didn’t have one issue with him on the sidelines this year. Last year we had an issue about every game because he was over competitive and let his emotions get caught up in the game and then you don’t think as well. In his situation, he conquered that a year ago. That helped him play better as the year went on.

“This year, his development in the throwing game, now that he’s learned to control his emotions, will be important through spring and August. Because we all know that he can pull it down, or keep it and run and take off and score and can make big plays. So as he now learns to understand what to do with the football and take what the defense gives him, it’s just going to give him a chance to become a better player at this level.”

Dunn added just how much of a boon it will be for Sanders to have a full spring and offseason (hopefully) unencumbered by COVID restrictions.

“To get this spring for him is huge because he had a good fall, and he came a long way as far as making decisions and keeping his emotions in check,” Dunn said. “So for him to back it up again this spring with another solid spring goes a long way moving into the football season.”

Sanders enters 2021 with 20 college football games under his belt and, for the first time, he’ll have the same OC and QB coach in consecutive years. That might not guarantee him success, but it definitely removes all excuses. And Dunn would have it any other way.

“For me to tell you exactly what our roster’s going to look like when we roll them out, our starting 11, I couldn’t pinpoint it, and I want it that way,” Dunn said. “I want it ultracompetitive. As far as what Spencer’s working on, he’s working on it all, competition being No. 1.”