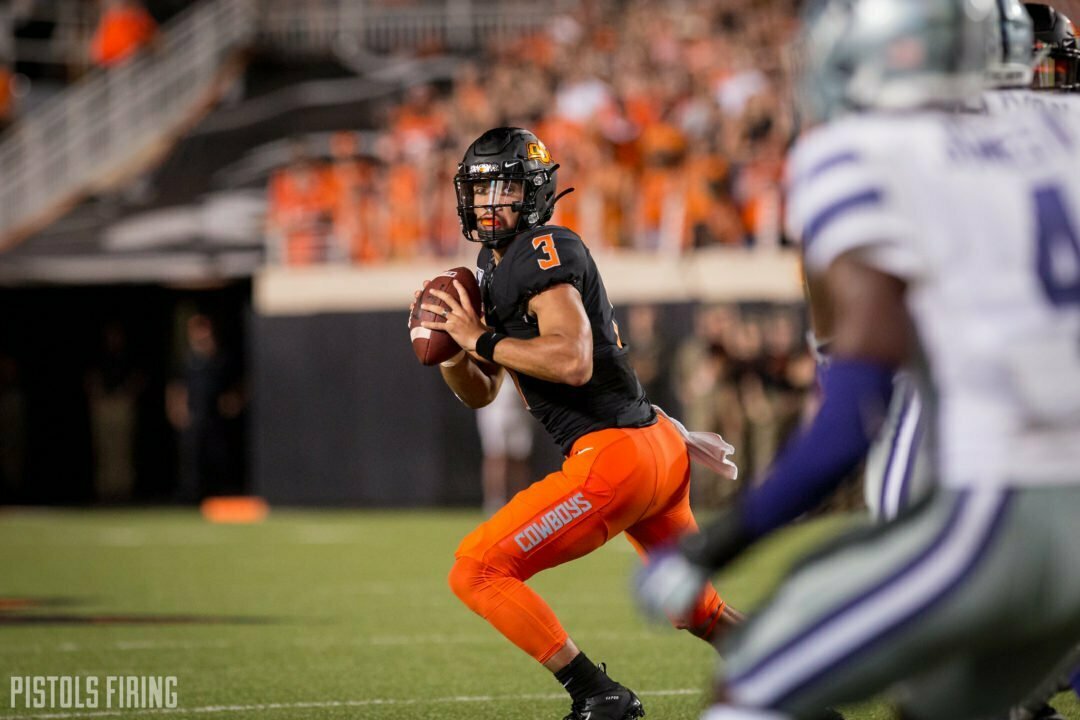 Oklahoma State has myriad questions across its roster entering the 2021 season — at running back, on the offensive line, in the heart of the defense — but it does not have one at its most important position: Quarterback.

OK, so maybe that’s too simplistic a statement. There are questions about the position — namely about how much returning starter Spencer Sanders can improve as a decision-maker, and whether or not he is equipped to lead the Pokes to the promised land only seen by middle-aged Brandon Weeden and his 2011 club. But Sanders is QB1 with a bullet entering the season. That much isn’t a question. And after competing in 20 games the last two seasons, experience and reps should be an asset to him instead of an alibi for errant decision-making. The expectation in Stillwater is that he’s primed for a leap. OSU’s title hopes in 2021 might hinge on it.

Beyond him, there are intriguing options vying for QB2 and QB3 and some other talented young players who are capable backups with Division-I talent. So, let’s break down the QB depth chart from top to bottom as we did yesterday with the running back spot — starting with QB1.

Injury likely played a significant role here. Sanders missed a month of action with a lower extremity injury that thrust true freshman Shane Illingworth into the QB1 driver seat. Then, when Sanders returned, the rushing element of his game was largely ineffective, often predictable and, most crucially, necessary, as he was scrambling for his life frequently because of offensive line attrition that plagued the team all year. We never got to see what a fully healthy Sanders could be in 2020, and OSU’s team context guaranteed that even if he was close to fully healthy down the stretch he wasn’t positioned for success.

Maybe 2021 could be different on several fronts. The offensive line unit looks to be ready for a rebound year. Sanders is full strength. And, entering 2021, he has already garnered some praise this spring, with Gundy specifically pointing out his maturity and poise as areas he’s improved on.

It feels like paralysis by analysis to take what Gundy has said about Sanders improving his demeanor as anything truly meaningful to apply to next season, but there’s something to be said for a player’s natural maturity. The transition to an upperclassman hits different. You feel the weight of that as a team leader, the pressure of performing better. Maybe he doesn’t become a Heisman contender overnight but small bits of his game tweaked to make him 10% better as a player could be the improvement OSU needs out of him to win double-digit games in 2021.

With Sanders sidelined last season, OSU turned to Ethan Bullock — briefly. (More on him in a sec. But long story short, OSU quickly turned to Illingworth.) The 6-foot-5 Cali product went 3-1 in his starting role and served as an effective game manager, completing 36 of his 49 attempts in his first three games against TU, West Virginia and Kansas.

However, Illingworth struggled against Oklahoma mightily, completing just five of his 21 attempts in a 41-13 loss and leaving fans with a sour taste in their mouths. Sanders was reinserted into the lineup against the Sooners where he found a sliver of success and retook his job for the remainder of the season.

The last impression can sometimes be the lasting impression. I get it. Illingworth wasn’t a zero, though, and doing what he did as a freshman — and in a pinch when everyone expected he’d sit all season and learn as a backup — was really promising. The size, the poise, the moxie and the big arm are all on his side to in time grow into a potential starter. He should be considered the QB2 unless we hear otherwise.

When Sanders went down with an injury against Tulsa early in the season, it was Bullock who was first off the bench to provide relief. And he wasn’t horrible; he completed 8 of his 13 attempts. But he made the dink-and-dunk approach look conservative, averaging only 5.13 yards per completion. His mobility was problematic, too, as he finished the game with six rushing attempts for -13 yards. Again, some of that was on an already injured OSU line. OSU turned to Illingworth the rest of the game.

Bullock wasn’t completely excised from the lineup — Gundy said after the game he didn’t feel Bullock was given a fair shake and didn’t commit to Illingworth for the KU game coming off the bye — but the KU game was the last one Bullock played in. There, he completed three of seven passing attempts for 33 yards, capping his season with just a 3.7 yards-per-attempt average.

I’m not ready to write him off. He’s 6-foot-4 with a strong arm and someone OSU coach Tim Rattay clearly liked when he first arrived. That matters. And, again, the context of last year’s team wasn’t exactly conducive to making a splash as a first-timer. But he’ll enter the season likely needing some injury misfortunes ahead of him to see meaningful snaps in 2021.

Tulsa Union product Peyton Thompson had Division-I offers out of high school but opted to stay in-state to play for Oklahoma State and to pursue a degree in sports management. He did not play last season or the season prior.

A walk-on (and the son of Mike Gundy), Gunnar also had Division-I opportunities outside of Oklahoma State but also opted to play for the Cowboys (and for his dad). He was the star QB of Stillwater High School who led the team to consecutive state runner-up finishes as a junior and senior. The 2021 season marks his first with the program.