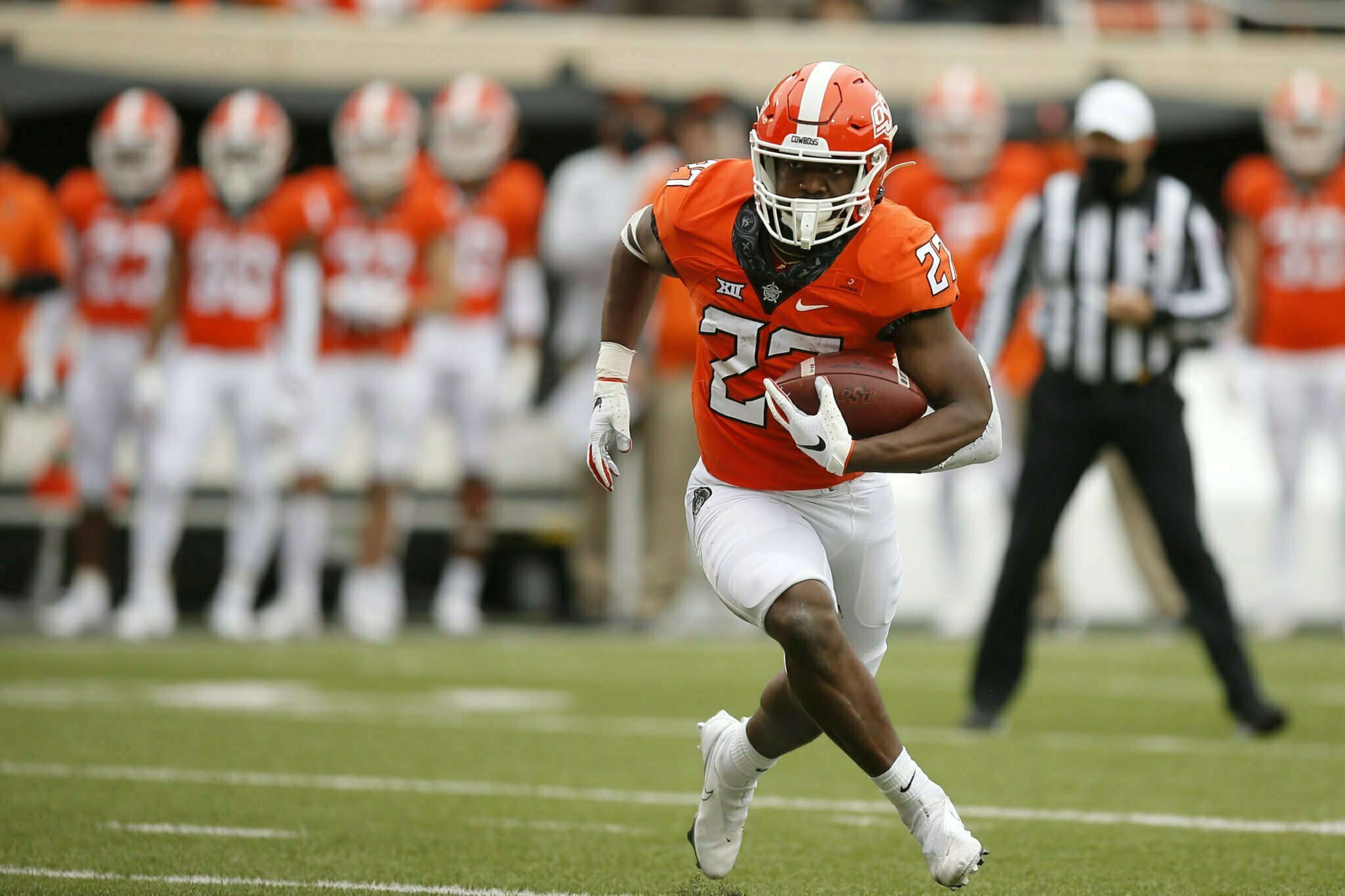 For the first time since the 2016 season, OSU in 2021 will enter the year with some uncertainty at its starting tailback position. That speaks to the consistency OSU has had in recent years under All-Americans Justice Hill and Chuba Hubbard, but also to the challenge of sorting out what looks like will be a crowded running back room this offseason.

Super-senior LD Brown appears to be next man up because of familiarity and experience, but he’s never carried a huge workload. Dezmon Jackson looked like a true No. 1 workhorse down the stretch, but can he sustain that over an entire season? And then there’s Utah State transfer Jaylen Warren who showed flashes in the spring to warrant consideration for starter reps. Sophomore Dominic Richardson deserves a mention here, too, especially after doing well for himself in a limited role last season.

Here’s what to expect in 2021 and how I’m handicapping the RB room.

While Brown to this point has not shouldered the load as a starting running back, he’s certainly got the resume worthy of an elevated job title. He’s averaged a whopping 5.5 yards per carry in three seasons for OSU and is coming off a career-best season in which he handled a career-high 82 carries for 437 yards and a pair of scores. That Justice Hill-neighborhood efficiency on a per-touch basis could thrust him to No. 1, though his 200-pound frame leaves some concerns here that could keep him from earning a true workhorse role.

In the human bowling ball tier of challengers between Dez Jackson and Jaylen Warren, 5-11 and 5-8, respectively and right around 220 pounds, I think Jackson has the edge here for a clear-cut RB2 role and perhaps a chance to earn No. 1 reps. In four games last season in which he earned 10 or more carries, he amassed 482 yards, including a breakout against Texas Tech in which he went buck wild for 235 rushing yards on 36 carries.

Then there’s Warren, a listed 5-foot-8, 215-pound scatback who was efficient in his role at Utah State but still isn’t quite a proven commodity. The big area he can help OSU is as a pass-catcher; he caught 15 passes in 2019 for 182 yards receiving. Having someone that low to the ground with his level of shiftiness gives off some strong Quentin Griffin vibes. If he’s your RB1, you might not be in great shape. But if he’s one of your top three backs the position group is stacked.

While Jackson and Warren are round-mound-of-ground-and-pound options that could push LD Brown and his speed for RB1, Richardson is the true X-factor. He does stuff neither Jackson nor Warren can do in large part because he is, quite literally, just built different at 6-foot and 205 pounds. What he did against Baylor last season — 23 carries, 3 scores for 169 yards — doesn’t feel sustainable for a season this early in his career, but it’s a flash of promise that in time he could be the dynamic do-it-all back that leads a backfield in touches down the road. Because of his versatility he’s someone I will continue to be high on as a sleeper in this backfield.

Nixon was a 2021 signee who enrolled early and has track speed — someone who reminds me of LD Brown in a lot of ways because of his smaller frame and breakaway speed. Middleton is a second-year player who redshirted last season as a receiver but moved to running back this spring. He has breakaway speed like Nixon and had a 1,000-yard rushing season in high school as a junior at Bishop Kelley.