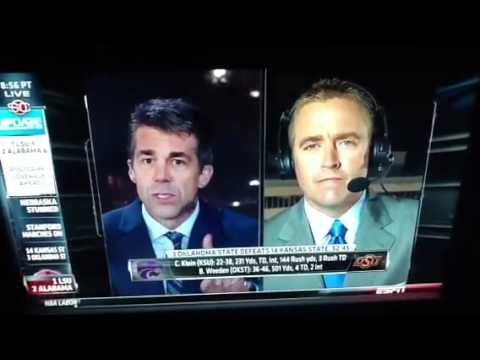 The Earthquake Game! The black jerseys also make an appearance for the first time. I think only the black pants, carbon fiber helmet, white stripe helmet, and Phantom Pete helmet haven’t made an appearance now.

Here’s a closer look at the gray-black-gray combo:

These are solid — I think we’re firmly in “these are good but you gotta rank ’em somehow” territory. The black top-gray pants look is tremendous and if it was topped off by a black (or even orange?) helmet I’d be all in but again the gray lids do them in.

The more I look back on these, the more I’m in on the gray pants. They look tremendous no matter which jersey they’re paired with. I’m glad OSU added them to the repertoire.

Also, feels like this is necessary (as always, the best part is that Fowler asks the longest question in the history of Fowler being Fowler):

That was quite a night.

Carson: I would have made this face just by the sheer enormity of Fowler’s question.

Completely agree Kyle, we’re in the “solid” uniform phylum now. This was a combo I had been anticipating since they announced the new uniforms. Clearly, they saved it for one of the biggest home games that year. This uniform countdown is a constant reminder of how insane that 2011 season was, by the way.

We’ve been over the Old Gray helmet, but I feel this combo was where it was most tolerable.

The black facesmask blends in perfectly. And you know how much I love the helmets and pants matching. The gray pants are fantastic, as Kyle mentioned. I wasn’t sure if I was going to be in on the gray addition when they first announced it, but seeing it in action has made me a believer.

I can’t wait to see the inverse of this (Black-Gray-Black), but this look is solid. I don’t know what Kyle has ranked ahead of them, but OSU could do a LOT worse than this combo. Thumbs up.