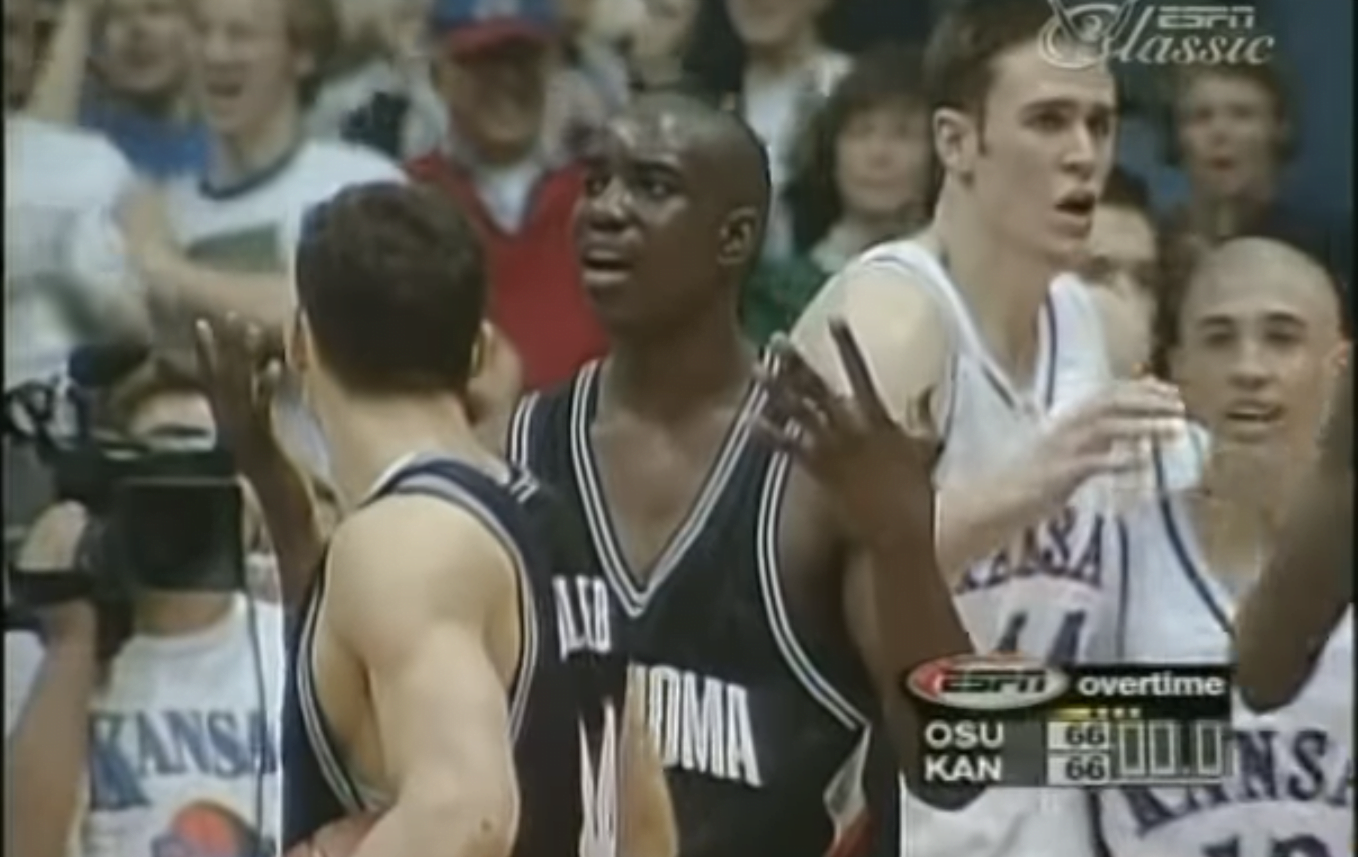 “My team got robbed in Lawrence.”

It’s a familiar phrase you’ll hear from fanbases all over the Big 12 just about as often as the University of Kansas hosts basketball games, but it’s not always factual.

Kansas is an elite, blueblood hoops program that boasts Allen Fieldhouse, one of the toughest home arenas on the map. So winning in Lawrence is hard.

But in 1999, when Oklahoma State traveled to Lawrence for KU’s Senior Night, its fanbase had plenty a reason to cry, “Thief!”

When that crowd gets in the game, sometimes you almost think the referees are leading the fast break. — Eddie Sutton

Visitor wins in the Phog are rare. That’s why when Mike Boynton (as a rookie head coach) came home from Lawrence with a W, it was so impressive. “Eddie never won at KU,” I heard (and probably said).

But if you look at the evidence, he should have.

Before diving into a decades-old investigation such as this, you have to ask yourself why. Why put myself through the torment and the drama of an all-time college basketball game when I know the sour end that’s coming?

To me the answer was simple and twofold. 1) Like most Americans, I am suffering from a critical deficiency of March hoops and 2) there is no statute of limitations for grand larcenies when they occur on Big Mondays.

After bravely rewatching actual footage of the felony from YouTube, I have uncovered some interesting evidence. First, I’ll set up the incident and then I’ll share six (mostly objective) facts that I’ve unearthed.

The crime took place — like many other alleged thefts — at 1651 Naismith Drive in Lawrence, Kansas. At Allen Fieldhouse, the crowd was as electric and daunting as always and the energy was turned up for Senior Night.

The Cowboys and the Jayhawks each came in at 18-8 on the season. OSU was fresh off of a big win over No. 22 Missouri and KU had just returned from dispatching the Sooners in Norman. Neither team was ranked but both had plenty to play for. They would meet again two weeks later in the Big 12 Tournament title game.

At this point the Cowboys, with an RPI of 58, were still considered a bubble team and a signature win at AFH would have done wonders for their tournament hopes.

It was a tightly-contested affair with OSU owning a 1-point lead at halftime Kansas surged ahead out of the break. OSU hung around and remained within striking distance before some crunch-time heroics by the Cowboys’ two leading scorers, Adrian Peterson and Joe Adkins, gave the visitors a chance at the end.

That’s all you really need to know at this point. Here are the facts of the case.

Fact No. 1: OSU Had a Big Man Problem

The broadcast crew of Ron Franklin and Jon Sundvold repeatedly quoted Eddie Sutton as saying OSU had struggled to limit big men all year. At the top of Sutton’s whiteboard was 7-foot-1 Eric Chenowith.

The sophomore center was on his way to an All-Big 12 second-team season in which he averaged 13.5 points, 9.1 rebounds and 2.4 blocks. OSU’s answer? 6-foot-10 junior Alex Webber.

When Webber blocked Chenowith’s first shot attempt, I can imagine my 14-year-old self thinking We got this one minute into the game. But on his next three touches, Chenowith drew a Web foul, made a turnaround jumper and then caught a pass off a screen and two-hand white-guy dunked.

Webber hung in there admirably but picked up three quick first-half fouls and was put on the shelf until the second. Chenowith went to halftime with 15 points on 5-of-7 shooting. Webber was effective at limiting Nick Collison-lite early in the second but he finally succumbed to the whistle. Chenowith ended by tying his career high with 25* points and seven rebounds.

Fact No. 2: Doug Gottlieb Put His Shorts on Backwards

This fact may not have had any real impact on the end result, but the key to a good investigation is being thorough. (Or at least that sounds like a thing someone would say.)

Around the midway point of the first half, Gottlieb attempted to enter the game with his swoosh pointing the wrong direction. The AFH crowd — obviously avid fans of OSU’s clean uniform look — razzed Doug until he corrected his wardrobe malfunction at the center of a Cowboy huddle.

The incident has provided plenty of Twitter ammo for Doug’s detractors over the years and was even brought up again by Roy Williams, then at North Carolina, in a jab at Gottlieb in 2016. It’s fine, Roy. I don’t believe a statute of limitations applies here either.

Full disclosure: I’m an Adrian Peterson (the Original) truther. If you got a chance to check out our latest PFB Roundtable, you witnessed my fandom for Pete. I’ll try to summarize the reasons.

• No. 3 scorer in OSU history
• Lethal shooter and all-around dynamic scorer
• Wildly underrated by the fanbase
• He was the guy at OSU during a very formative time in my sports fan life

But aside from all of that, Pete brought it to the Phog. He led all scorers with 23 points, making big shot after big shot. He led the Big 12 in scoring that season for Iba’s sake.

Fact No. 4: This Team Was Fun (Video Evidence)

It’s hard to compare players and teams from different eras, but the first full game I’ve watched with this nucleus in two decades confirmed my memory of this group. They were downright fun to watch.

You had Pete flinging up (and making) tough shots like this time and again.

Joe was 3-for-9 from beyond the arc but made all three in crunch time. (Notice how this deep ball actually cause a glitch in the matrix as it goes in. Sorry, I’m in 1999 mode.)

After watching this one, I’m pretty sure KD actually picked No. 35 because of Joe Adkins. A stone-cold killer.

I’m using cord-and-the-floor in my first Instacap as soon as basketball comes back.

And Glendon Alexander may not have been the teammate you wanted off the court but, by golly, he was the sixth man you wanted on it.

The felony that would soon follow nullified what would have been one of the most clutch shots in OSU history.

I could continue fill this space with several more highlight clips and giddy, nostalgic minutiae, but I’ll let the video evidence do the talking. Eddie knew how to bring in dudes and how to build a team.

Fact No. 5: The Cowboys Weren’t Blameless

Key turnovers, missed opportunities and some, frankly, freak accidents tripped the Pokes up. There’s no better example of the latter than this late accidental tip-in by Adrian Peterson going for a rebound in overtime.

That one stung, but there’s not a bigger heart-breaker than this.

With 20.1 seconds remaining in regulation, OSU had made a stop and had the ball tied 56-all with a chance for the walk-off stunner. After the play broke down, Alex Webber found Desmond Mason approaching the paint. He made his move and took his shot and the look on the faces of the Coaches Sutton say it all.

Mason finished just 2-for-9 on the night but this was a pretty good look from a guy who came through for OSU more times than not in his career.

Despite these snafus and the countless other details that don’t bounce your way in any game of hoops, the Cowboys still hung in there and grasped their chance to take home that rare KU road win.

Fact No. 6: Oklahoma State Was Robbed

The evidence is pretty damning. If you aren’t old enough to remember the happenings of the final seconds of this game, I’ll include it below.

But before we put a bow on this travesty, here are a few more facts you should know.

1. OSU tied the game with 2.2 seconds left with the above-illustrated clutch shot by Glendon Alexander.
2. Chenowith in-bounded to Boschee who called KU’s last timeout, advancing the ball and giving the home team 1.6 seconds, half the court and a chance for a catch-and-shoot to avoid double-overtime.
3. Ryan Robertson received the in-bounds pass and JUMPED SIDEWAYS into Adrian Peterson, drawing the type of foul one only gets gifted as a Jayhawk in Lawrence.
4. With zeros on the game clock, Ryan Robertson made his first free throw to seal the theft. (These were the days before instant replay and officials being able to add time to the clock.)
5. Ryan Robertson performed the most undeserving triumphant/forceful un-tuck celebration in college hoops history.

Okay, here it is. Be warned that this video is graphic in nature and may not be suitable for all ages.

That was it. It was over. What a gut punch. Even the ESPN crew couldn’t believe what they saw.

During his weekly show with Tom Dirato, Sutton addressed the questionable whistle that closed the door on his team’s chance at an all-time win.

“If you’re not careful, when that crowd gets in the game sometimes you almost think the referees are leading the fast break. They too get caught up in the emotion.”

So Eddie never got his win at Kansas. The Cowboys would return home for their own Senior Night and take all their frustration out on Texas Tech in a 93-67 walloping. OSU rattled off three-straight wins in Kansas City before facing Kansas again in the Big 12 Tournament Championship game. The Pokes were 0-3 versus Kansas that season.