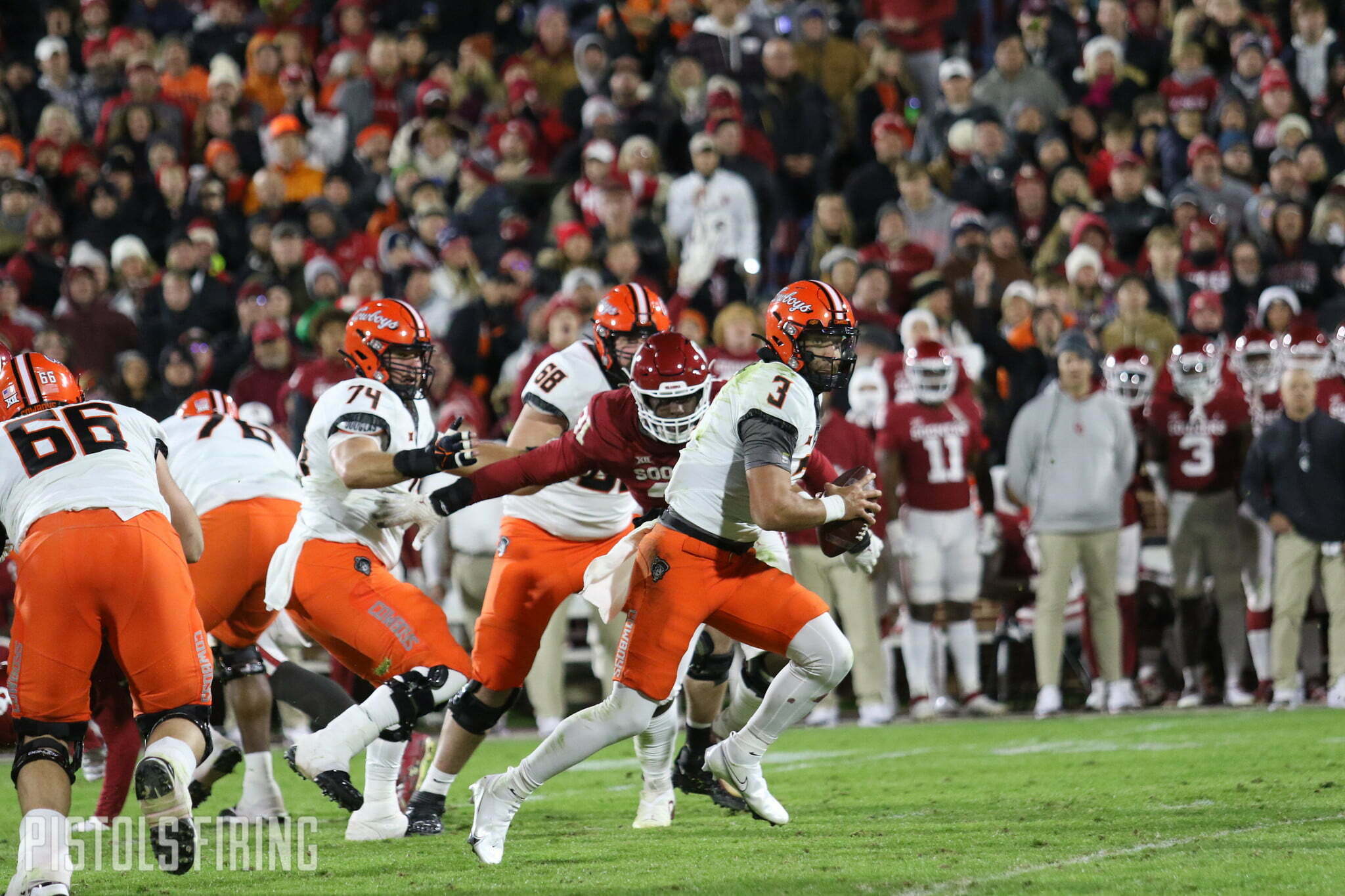 For the first 15 minutes of Bedlam, anything that could go wrong for Oklahoma State did. Over the next 45, the Cowboys couldn’t make enough things go right to make up the deficit.

No. 22 Oklahoma State fell to Oklahoma in Norman 28-13 despite holding the Sooners scoreless over the final three quarters. The Cowboys move to 7-4 on the year (4-4 in conference), and the Sooners move to 6-5 (3-5) and are now bowl-eligible.

Oklahoma State found itself in a huge hole after the first quarter of Saturday night’s Bedlam game. Then the Cowboys’ defense shut down the Sooners for the rest of the way. Unfortunately for OSU, its offense couldn’t make enough plays — or pay enough of them off — to complete the comeback.

If it could go wrong for the Cowboys, it did in the first quarter. Dillon Gabriel threw for 224 yards and two touchdowns and ran for another in the opening period. Spencer Sanders, on the other hand, looked rusty and disjointed from the jump. The Cowboys’ running game continues to be a weak point leaving them one-dimensional which put that much more on the shoulders of Sanders, and he was unable to bear it in his first start in three weeks.

After falling behind 28-0 (a Bedlam record lead for an opening period), Oklahoma State’s defense found a way to shut the Sooners down. After Gabriel’s otherworldly first quarter, he mustered just 25 passing yards and an interception over the final three. With such a big lead, the Sooners’ vaunted running game should have been able to ice the game by the third quarter, but OU was unable to sustain drives, leaving the door open for the Cowboys to complete a historic comeback. But to hit the door, you’d first need to hit a barn.

At the onset, ABC sideline manTom Luginbill reported that Spencer Sanders hadn’t practiced for five weeks before this last Tuesday. With the way Sanders and his receivers were out of sync, I believe it.

On multiple occasions, Sanders and his wide receiver appeared to not be on the same page when it came to the play call resulting in balls being thrown to empty spots on the field and one of his four interceptions on the night. Other times, balls were thrown high or behind a receiver. Sanders finished 36-for-67 (!!) for 381 yards, one touchdown and tied a career-high with four picks. That was also a career-high in pass attempts. Sanders led the Cowboys with 42 rushing yards on 17 attempts.

But the Cowboys’ offense did finally start putting together some drives. It just had trouble finishing most of them. Sanders was moving the chains with his feet and finding playmakers in space. He found Braydon Johnson for a 47-yard play early in the third quarter to get into OU territory. That drive would end at the Sooner 16-yard line when the Cowboys turned it over on downs. Brennan Presley had a nice 55-yard pass and catch to get to the OU 12-yard line early in the fourth quarter, but OSU settled for a field goal.

With just under six minutes to go, OSU threatened to score a touchdown and pull within score, but Sanders threw his fourth pick in the end zone. The Pokes forced the Sooners into six-straight three-and-outs to finish the game, but OSU only score 10 points on its subsequent possessions.

Brennan Presley led all receivers with 118 yards on nine catches. In his return from injury, Braydon Johnson had 109 on seven. Jaden Nixon rushed for 37 yards on seven attempts and caught seven passes for 50 more. Sophomore Cowboy back Quinton Stewart had his first career catch for a two-yard touchdown. He was the only Cowboy to find the end zone.

Jason Taylor II continues stuffing stat sheets and making plays. He led the game with 11 total tackles and 10 solo tackles. He also recovered a fumble, grabbed his fifth interception of the season and logged a pass breakup. Mason Cobb added eight tackles, a half tackle for loss and a pass breakup.

Next up, Oklahoma State ends its regular season with a trip from West Virginia. The Senior Day game will kick off at 11 a.m. Saturday, Nov. 26.