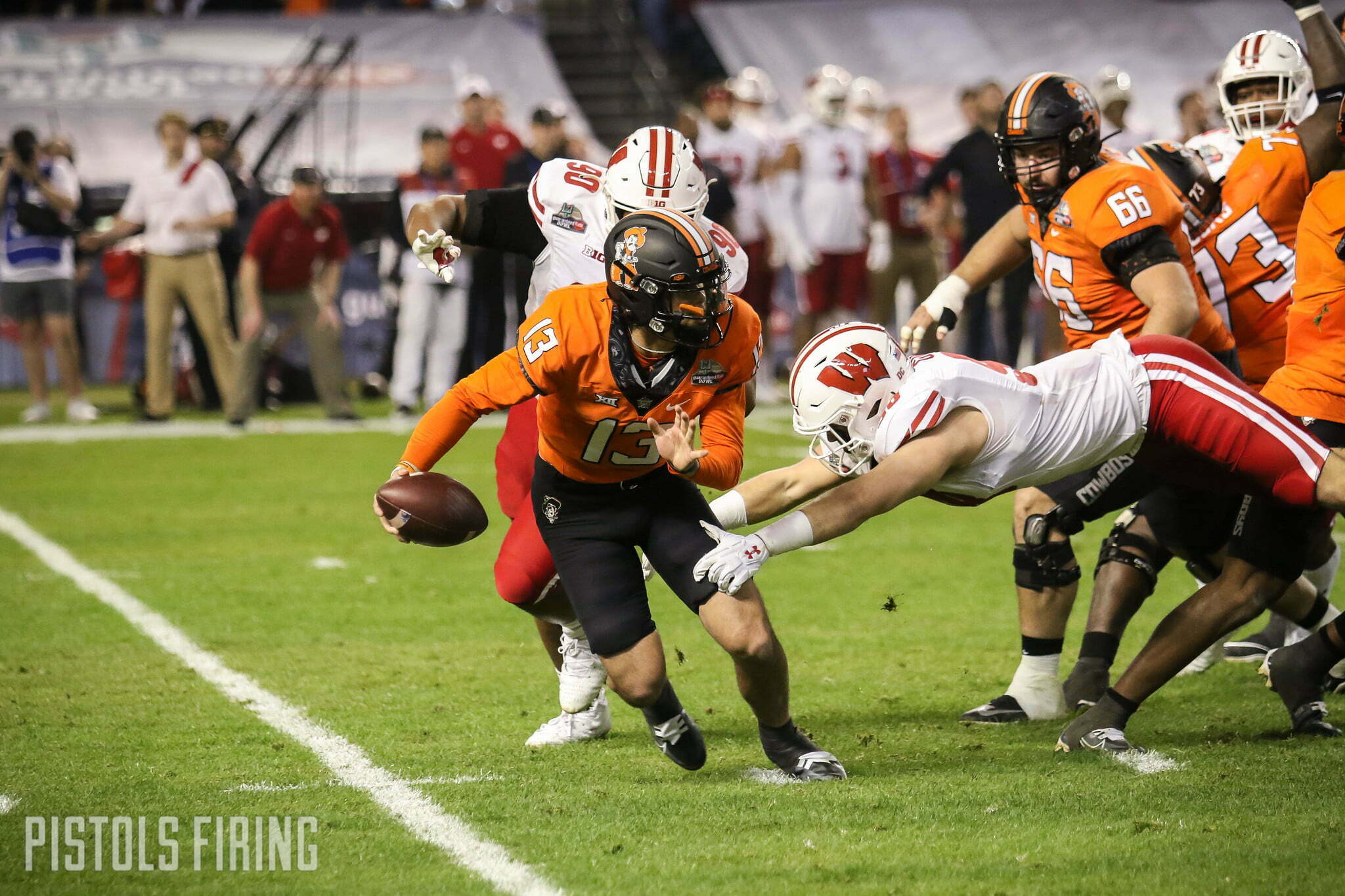 The Cowboys couldn’t find their footing on a slippery grass-covered baseball field for much of the night. But when they finally did make some progress, it was too little, too late.

Oklahoma State fell to Wisconsin 24-17 in the Guaranteed Rate Bowl. The Cowboys came back from a 24-7 second half deficit to pull within seven, but a late interception by OSU quarterback Garret Rangel kept the game just out of reach.

Trey Rucker saw his first action of the season and immediately made an impact by saving a would-be touchdown — twice in three plays. After running down Chez Mellusi from across the field to save a walk-in score, Rucker intercepted Badgers QB Chase Wolf in the end zone.

Stephon Johnson Jr. paid off that turnover with an 84-yard score on the next play to give the Cowboys a 7-3 lead.

Aside from that play, which was the longest for the Cowboys this season and the longest pass play in OSU bowl game history, OSU had very little going on offense for the first three quarters. Those 84 yards accounted for 70 percent of the Pokes’ first half yardage. As the game went on, the Cowboys struggled to keep their footing, literally. Players from both sides slipped around on the grass-covered baseball field, but the Cowboys’ offensive players especially fell victim to the greasy grass. Garret Rangel went down for a big loss multiple times while trying to escape the pocket.

The Badgers doubled up the Cowboys on the ground in the first half, outgaining OSU 251-121 and ended the game with a 374-281 advantage. Wolf came into the game having attempted just six passes on the season, but after that early pick he hit his stride. He finished 16-for-26 for 116 yards and a score.

Midway through the third quarter, John Paul Richardson’s 17-yard catch-and-run earned the Cowboys’ first first down of the second half. But that rare positive-yardage play was immediately followed up by a Garret Rangel interception on a ball that looked like it was complete to Rashod Owens. The Badgers directly turned that turnover into seven points of their own.

But the Cowboys had some fight left in them. On the first play of the fourth quarter, Rangel aired it out and Brennan Presley made a beautiful play on the ball get in the Cowboys into scoring position. After three failed attempts at the end zone, Rangel made something out of nothing on fourth down to avoid the sack and pull the Pokes within 10.

It took them until the fourth quarter, but the Cowboys finally were able to put together back-to-back scoring drives, following that fluky TD pass with a 13-play, 69-yard drive that ended with a field goal. OSU pulled within 24-17 with just over five minutes remaining and all its timeouts. After OSU’s defense earned a stop, Rangel overthrew Richardson down the sideline and the ball fell right into the mitts of UW cornerback Cedrick Dort Jr. for Rangel’s second pick of the game. After starting 5-for-8, Rangel finished 14-of-31 for 229 yards and two scores to two interceptions.

The Cowboys came in ranked fourth in the FBS in third-down defense, but it was the Badgers who were able to keep drives alive in for much of the game. Over the first two quarters, Wisconsin used a lopsided third-down discrepancy (4/8 to 0/6), and a dominant rushing outing (149 yards to just 11), to help the Badgers own the time of possession, holding the ball for 23:10 of the first half compared to the Cowboys’ 6:50.

Things evened up quite a bit in the second half, but this was another game in which the Cowboys dug themselves too big and too early a hole to climb out of. The Cowboys end their season 7-6 and went 4-5 in Big 12 play. Mike Gundy’s bowl record falls to 11-6 in his 18 years at the helm.