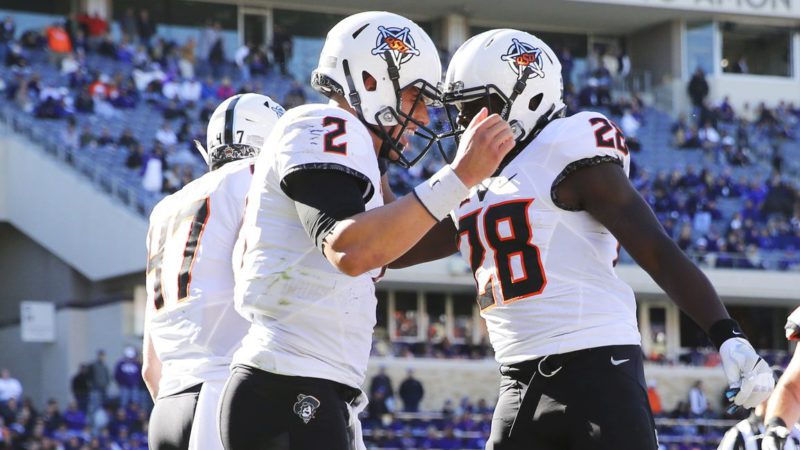 During Mike Gundy’s National Signing Day press conference, “Big Daddy” himself was asked what impact the return of players like Mason Rudolph and James Washington has had on his 2017 recruiting class.

“It had an overall effect on morale,” said Gundy. “There is a perception and feeling that’s out there, and there is excitement that’s out there. You have high-profile players like those two and they say they’re coming back. You guys know that they’re non-BS guys and they’re hard workers. You have the leadership established that’s coming back.

“There’s excitement. The class of wide receivers in this group is fantastic. They think they’re going to catch passes from Mason, so it impacted their decision and them staying with us. That feeling you get from young men coming back, the perception is always positive.”

Tylan Wallace — the 16th ranked wide receiver in the class per 247Sports — falls into that category. Last month he spoke with ESPN’s Jeremy Crabtree about Rudolph and Washington’s return for 2017.

“It’s going to help me a lot to be able to learn from a guy like James,” said Wallace. “He can break it down for me like nobody else can and that will only help me as a player. And I can’t wait to catch passes from Mason.”

Wallace, along with LC Greenwood and Braydon Johnson, will step into a deep and talent-rich wide receiver pool with more stars than just James Washington.

Jalen McCleskey, Marcell Ateman, Chris Lacy are all players who had large roles in the offense last season. So finding a role for the young freshman will be a tall task. Nevertheless, the opportunity to learn from a future pro — and catch passes from another — is something that helped draw recruits in and keep them locked with OSU.

The recruits are excited. Big Daddy is excited. We’re all excited. How much longer until September?