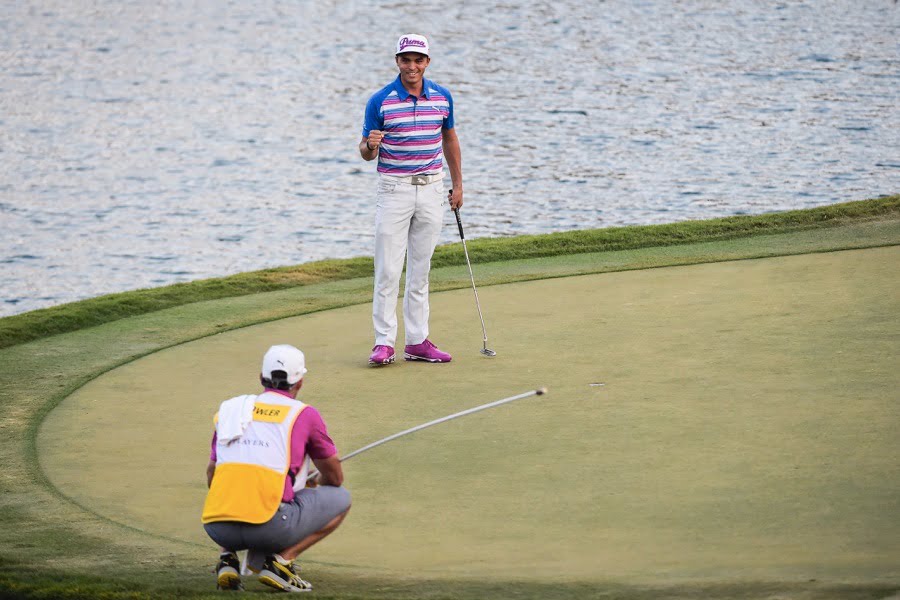 There I am, covering what I thought was going to be a boring finale to the 2015 Players Championship. Silly me for thinking that with Sergio Garcia prominently involved.

Garcia had it on cruise control down the back nine on Sunday when NBC cut to Rickie Fowler on the 13th hole, a tough par 3. He poured in a two there to move to 7 under for the tournament, four back of El Nino.

Then caddie Joe Skovron handed him a match and he lit the tournament on fire.

The birdie on No. 13 sent Fowler chasing a 6 under finish over the final six holes. He then went 2 under in the four-hole playoff for a total of … I’m not making this up, 8 under over the final 10 holes of the weekend.

Fowler beat Kevin Kisner and Garcia in that playoff after making birdie at the famous 17th hole for the third time in about 90 minutes.

He then made out with his model girlfriend on the island green and took home a $1.8 million check for his efforts. It was all pretty spectacular stuff for one of America’s best golfers.

It was also quite a show for somebody who up to this point in the 2014-15 season hadn’t really played very well (this was his first top 10 finish in a stroke play event this calendar year).

Of course there’s also the matter of the now-infamous anonymous poll of PGA Tour pros who called Fowler and Ian Poulter overrated.

Here’s the thing, Fowler is overrated among a certain sector of fans. Namely, kids and people who don’t really follow golf that closely. He’s sort of like Kyrie Irving (this isn’t a bad thing in and of itself, of course, though some perceive it as such).

Chris Kirk, Billy Horschel, Brooks Koepka, Hideki Matsuyama and Jimmy Walker. These are all people who wouldn’t get recognized in public. They’re also all probably as good as or maybe even better than Fowler is.

The strange part, though? He’s actually wildly underrated by a lot of people who cover and watch golf every week. It’s an incredibly strange dichotomy, really. There’s not really anybody in golf like him (I wrote at length about this last year).

Jake Nichols recently wrote a tremendous piece about how Fowler is cursed because he plays his best golf in events where the best fields play and has done so during some historic performances by Rory McIlroy and Martin Kaymer.

In a rather humorous turn of events, Fowler won this week in what is probably the most difficult event on the planet to win (there has been only one repeat winner since 1993 — Big Cat, predictably).

My favorite moment of this tournament actually came on one of the three holes in the final 10 in which Fowler didn’t make birdie or eagle. It was on the 18th (the hardest hole on the course) after he and Kisner had just made birdie at No. 17 to go up on on the Serge.

Fowler took an “I thought Billy Horschel was going to have to bring a wheelbarrow onto the 18th fairway to carry his stones up to the post-round presser” line down the left side of the fairway and pumped it 336 yards.[1. I’m not convinced Horschel wasn’t in the gallery on 18, wheelbarrow in hand.]

Three-hundred thirty-six yards on the toughest par-4 on the course with $1.8 million on the line. If Johnny Miller ever plays the “not clutch” card again…

The next best moment came in his post-tournament press conference when he was asked about the people who voted in that anonymous poll.

Rickie Fowler is a showman — he mentioned his money games with Phil Mickelson as being key to the win on Sunday — and in this way he is misunderstood, I think.

He wears flashy clothes and big hats because they’re part of the show, not necessarily because they are who he is. And this is the beauty, because few have figured out how to combine his embarrassingly-immense talent with a business acumen that is as underrated as his game is misunderstood.

This Players Championship erases all of that, though. Now the narrative can’t be “couldn’t win the big one” because he did it in the most dramatic, indelible way you could possibly win the big one.

Now it’s just “what does the rest of his career hold?” which is a much more palatable question than the last one.

He won’t outright say it even though his final 10 holes on Sunday were basically just one giant middle finger to the rest of the PGA Tour, so I’ll say it for him.