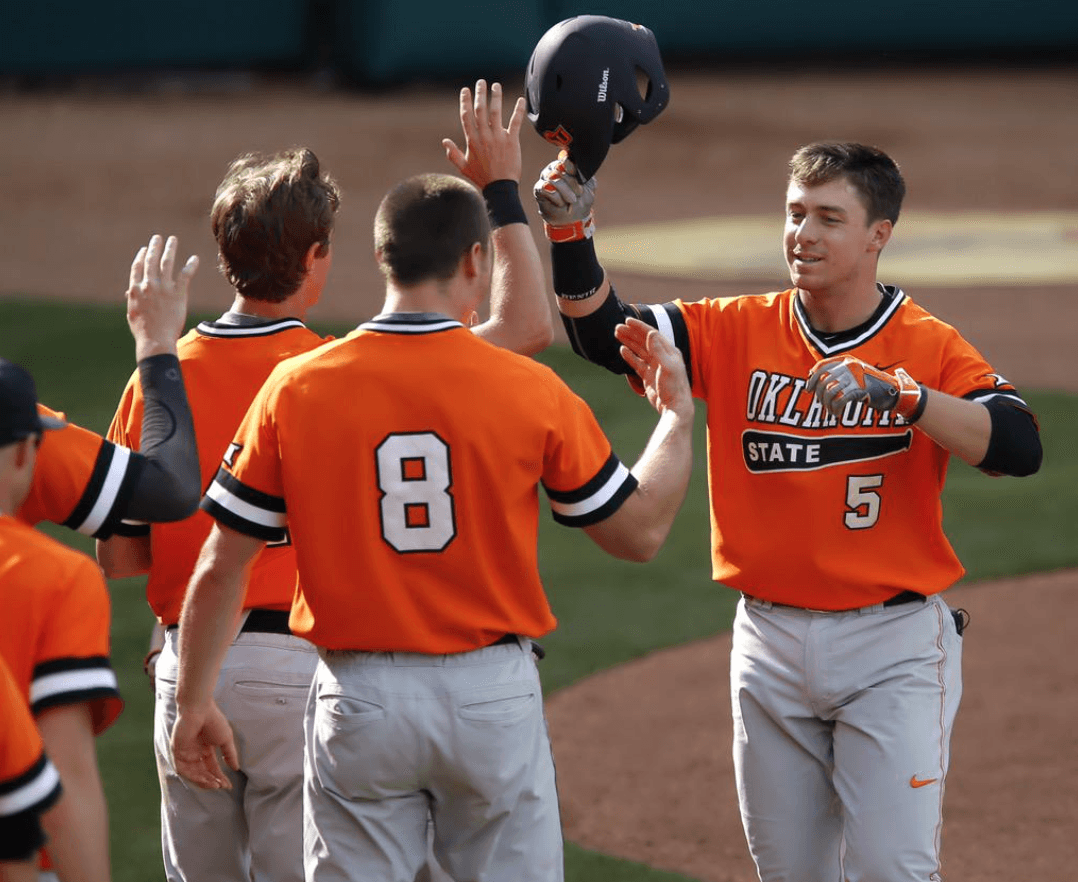 OSU has its midweek game washed out, but proceeds to take two of three from Bedlam as the race for the conference title heats up.

The Cowboys were scheduled for an easy home game against UALR, but torrential downpours throughout Monday and early Tuesday caused the game to be postponed. No make-up date has been announced.

Quite a lot was riding on this series: positioning in the conference standings, revenge for the latest beatdown, new fans, the past and future of Oklahoma… ok maybe a bit extreme, but this was a huge series. OU would hold a lead after the 1st inning in all three games, but only came away with one win.

Jon Perrin got the start Friday night and was a bit shaky, allowing five runs and walking five in seven innings. Thankfully, the offense picked up the slack, taking advantage of Sooner errors in the 2nd and 5th to retake the lead. Seven Cowboys recorded a hit in the game, including Ryan Sluder’s fifth home run of the season in the 7th. OU rallied for two runs in the 8th and another in the 9th, but couldn’t complete the comeback and dropped the first game of the weekend.

Saturday belonged to Michael Freeman, as it often has this season. The senior southpaw threw his third complete game of the year, a 119-pitch effort that saw him strike out seven and give up a lonely run on the way to his 8th win of the year. OSU hitters gathered 12 hits, led by Bryan Case’s monster day at the dish. The senior catcher finished 3-4 with a pair of doubles and his first triple this year, to go with three runs and three RBIs. Corey Hassel also contributed three hits and two RBIs.

The Cowboys had a chance Sunday to sweep OU for the first time since 2007, but Josh Holliday has been unable to find a solid Sunday starter. This time it was Carson LaRue, who lasted just 1.2 innings and allowed two runs. Trey Cobb would pitch excellently in relief, throwing 4.1 innings and striking out four. But Tyler Nurdin, making his 8th relief appearance this year, gave up a two-run homer in the 7th that proved to be the difference. Three Sooner pitchers combined to allow just five hits to the Pokes, who outscored OU 44-14 in four games this season.

Both players had a week that exemplifies their seasons thus far. Case hit .417 (5-12) in three games against the Sooners, knocking in four runs and scoring four himself. His best game was Saturday, when he went 3-4 from the plate with two doubles and a triple – his first of the season.

Sluder continues to exert his power, hitting his fifth and sixth home runs of the season. He now leads the team in long balls after hitting none in 67 at-bats last year. On the week, he hit .364 (4-11) with four runs, three RBIs and the aforementioned homers.

The senior southpaw threw his league-leading third complete game of the season, striking out seven and allowing a singular run Saturday. He now leads the Big 12 in innings pitched (85.2) and has the lowest ERA of any conference starter (1.16). Freeman is already making his way to postseason award watchlists, and should garner another Big 12 Pitcher of the Week award later today.

A couple of web gems from the weekend:

Updates from some OSU alums:

Go vote for him here:

A joy to listen to #okstate baseball players. Humble, gracious, deflect praise to others. Reflection of mindset Josh Holliday has instilled.

Great attendance, but how about 5 years in a row?!: