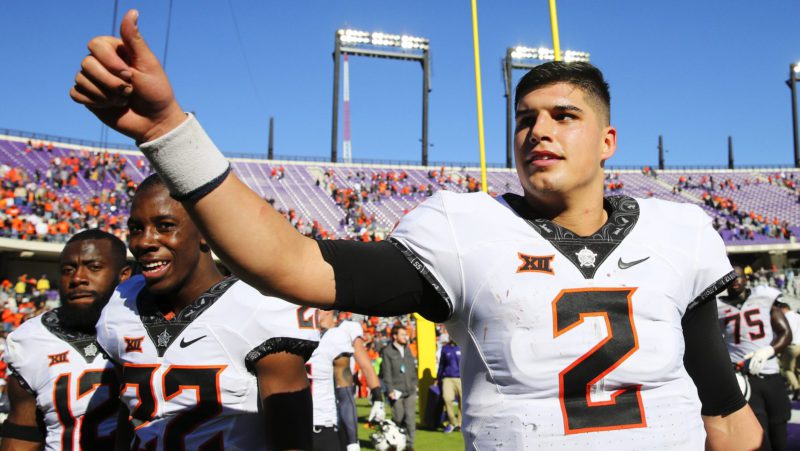 The first time you saw him you were enamored. It’s okay to admit it.

With just two games remaining in what looked to be the darkest season in Mike Gundy’s tenure, the head coach pulled the trigger and ripped the red shirt off the back of his program’s QB of the future. That decision, as it turns out, made all the difference in the world.

Rudolph followed up a promising debut in Waco with a comeback win in Norman, permanently staking his plot in OSU lore. The cherry on the top was a fun exhibition in a Cactus Bowl win over Washington. There he was. A four-star QB with all the measurables that you could ever want.

He’s tall… An inch taller than Brandon Weeden, actually. He’s got a cannon for an arm and is elusive if not crafty in the pocket. He’s shown to make good decisions more times than not. More than anything, he’s as cool as a cucumber with the pressure on.

It’s that calm under pressure that sometimes get’s the All-Big 12 snub in trouble. He can sometimes hang out in the pocket an extra second too long waiting for that window to open which has led to at least some of the 31 sacks the Cowboys have allowed through twelve games.

Rudolph’s captained the Cowboys to winning streaks of seven games and twelve games during his fairly short tenure. Those are two of the top five consecutive-win stretches in program history. (Weeden only boasted 11-game and 6-game streaks.)

A dose of reality

He’s not perfect. There have been some fumble issues this year. Six fumbles (five lost). Six is not a necessarily huge number. Baker Mayfield has six. So does Pat Mahomes. But most of Rudolph’s seem somewhat unforced.

He’s also had his issues with accuracy, mostly on intermediate throws but overall has been good with the ball. Rudolph’s four interceptions is tied with Jesse Ertz for lowest among Big 12 QBs. He’s the only quarterback in the nation to throw for at least 3,500 and fewer than five interceptions.

Statistically, Rudolph is coming off his worst game since the thumping the Cowboys took at the hands of Ole Miss during last year’s Sugar Bowl. That may be the reason he’s decided to come back for his senior season. Who knows what a good showing and a Bedlam win would have done to his rising draft stock.

Whether we want to blame a Bedlam loss on Rudolph or the coaching staff, he’s got to better. And he will be.

In the Valero Alamo Bowl on Thursday, the record-setting junior will face one of the better secondaries in the country and try to push his team to consecutive 10-win seasons under his watch. Program-changing quarterbacks don’t come around all that often but this one is coming back for a final year. Hopefully, he and the Cowboys can finish off 2016 on a good note.