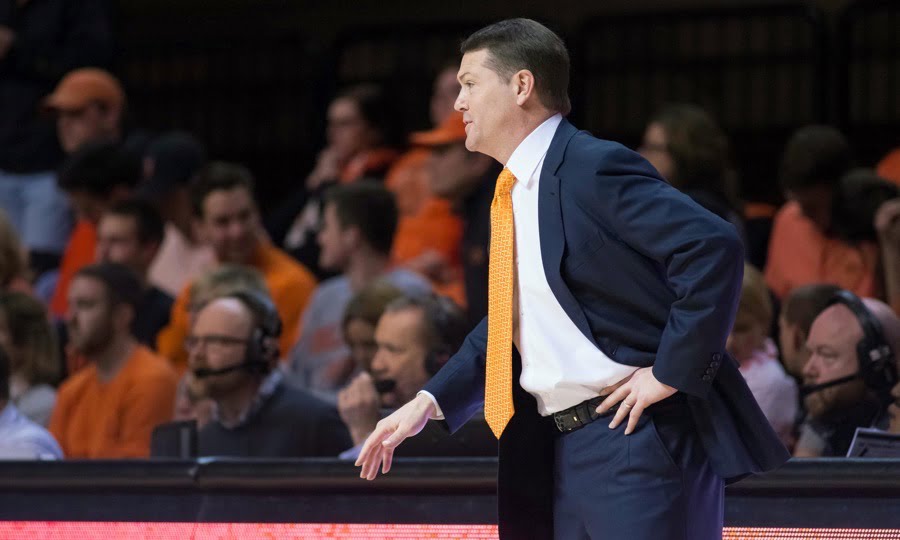 Travis Ford watches his team get a win against TCU. (USATSI)

To put it mildly, things haven’t quite turned out how Oklahoma State fans would have hoped.

Just five games ago, the Cowboys were riding high with a top 25 ranking as they looked to finish the season with a strong bid for a high seed in the NCAA tournament.

After taking down then No. 25 Texas, No. 8 Kansas, and No. 16 Baylor in the span of five days, the Cowboys looked dangerous. But then, the bottom dropped out.

Four straight losses followed, two of which came at the hands of the bottom two teams in the Big 12.

Saturday, at perhaps the lowest point of the season, the Cowboys lost by one point to Texas Tech, a team that, at the time, held a 2-14 conference record.

With a recent win over TCU, OSU seems to be righting the ship somewhat, but fans feel like the Cowboys still could have done much more than they have.

Despite recent struggles, OSU head coach Travis Ford says he remains optimistic, particularly with the “One-And-Done” system he and assistant coaches have in place at OSU.

“Sure we’ve had our ups and downs,” said Ford, wearing a polo with “Ask me about GIAHI” printed on the front, “but we’ve got a chance to redeem ourselves and finish the season strong.”

And with the win over TCU, Ford says OSU’s postseason chances to be One-And-Done are good.

“Oh we could easily lose in the first game of the [NCAA] Tournament,” said Ford, “Easily. I think our resume is good, as long as we keep performing at a high level.”

Ford admitted that he wasn’t sure if this team could be a One-And-Done team at the beginning of the year.

“We’ve had to replace a lot of talent,” said Ford, “but this team has really come together and really bought into our One-And-Done system. And the assistant coaches have been great. We’re rebounding and shooting like never before. It’s very exciting to watch.”

Ford attributed the four-game losing-streak to a lack of execution and some poor preparation on his part.

“We try to run drills every day about just missing the mark,” said Ford. “We go bowling and try to knock down only nine pins, especially in the final frames, eat dinner and order dessert but never eat it, that sort of thing.

“It’s as much about mentality as basketball. But those 4 games we didn’t run as many, and I think that threw off our rhythm. The One-And-Done system takes an incredible amount of focus.”

Ford admitted that he has borrowed some of his system from John Calipari’s one-and-done approach at Kentucky, but Ford says he thinks the differences between the systems speak for themselves.

“You know,” said Ford, “we try to hammer home to these guys every day that it’s not enough to lose during the season: we have the chance to lose in the postseason when the stakes are high.

“Not a lot teams get that chance. Not a lot of teams can go that far, but this one can if they stick with the system and trust in their coaches.”

Ford also noted that while they have the NCAA Tournament loss in the back of their minds, they can’t be distracted from the task at hand.

“We still have a chance to inexplicably beat West Virginia in Morgantown,” said Ford. “And after that we’ve still got a huge opportunity in the Big 12 Tournament. It’ll be a tough challenge, but we’ve got just as good a shot at losing our first game in that tournament as anyone else in the Big 12, and our boys know that.”

When asked what he thought about OSU’s chances of losing in the first round of NIT, Ford said, “Not very high. I mean, we prepare every year to peak One-And-Done in time for the [NCAA] Tournament, so that’s our goal.

“But anything’s possible. If we manage to get to the NIT, I think we can adapt our system to fit the situation.”