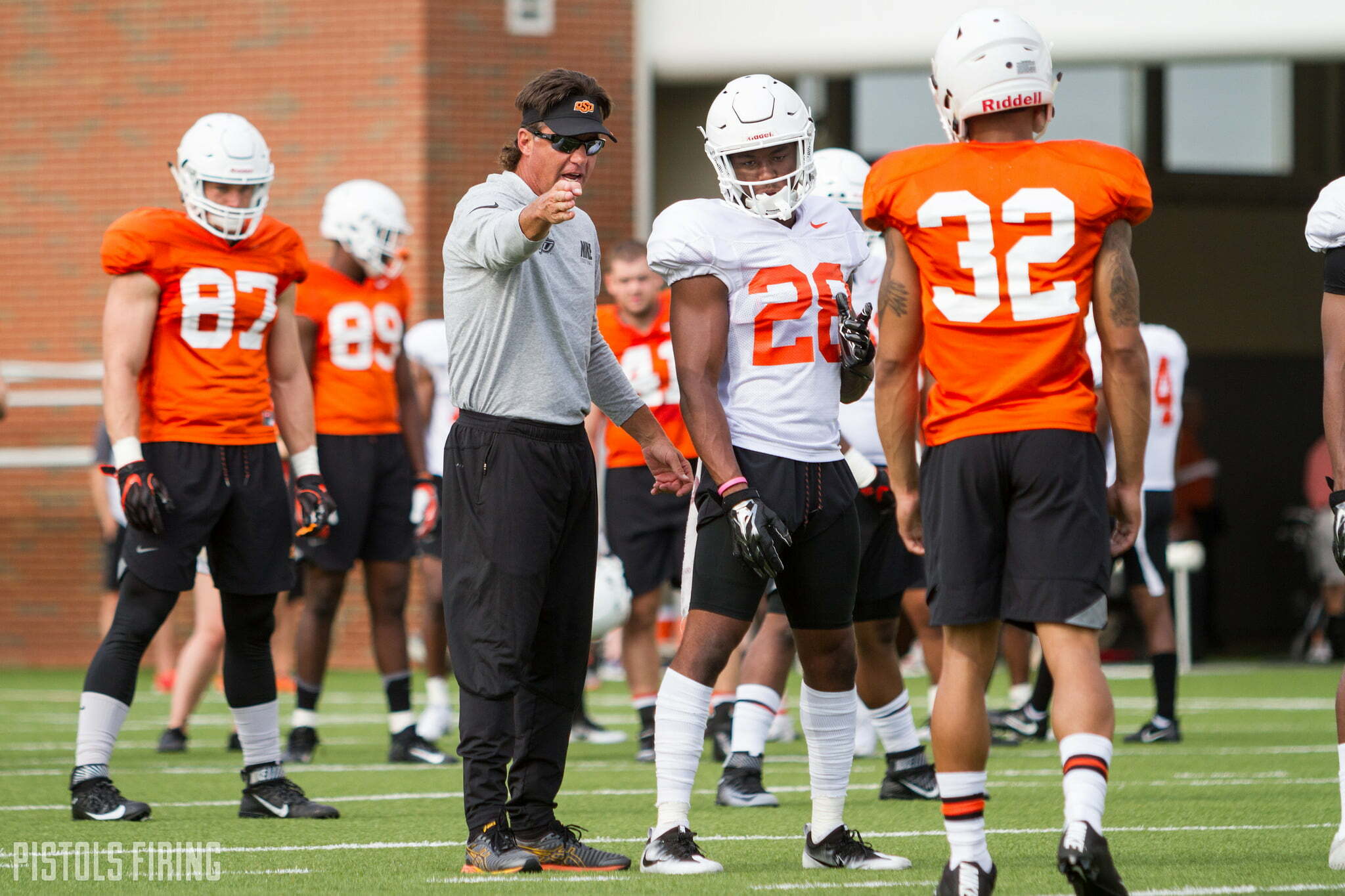 As we head into the season opener this Thursday, I wanted to discuss four things I would like to see from the Cowboy offense this season. These aren’t all brand new concepts, but all of them are things we haven’t seen Oklahoma State utilize very often when they’ve had the ball in recent years.

A couple of weeks ago I wrote about things to look for from Oklahoma State’s offense this upcoming season. One of those things was multiple running back sets. I focused primarily on sets showing the running back lined up in the slot or as the H-back, but didn’t go into much detail on split back formations. This is something I really want to see from Mike Yurcich during the 2018 season.

We haven’t see OSU run a lot of split-back sets since the days of Joseph Randle and Jeremy Smith, but with the likes of Justice Hill, J.D. King, LD Brown and Chuba Hubbard on the depth chart, the Cowboys need to get these guys on the field as much as possible. Having multiple talented backs on the field at one time causes the defense to think more than usual on typical rushing downs. They will not only have to account for All-Big 12 back Justice Hill, but they will also have to keep an eye on whoever else is in the backfield alongside him.

Here are some examples of plays I would like to see added into Yurcich’s game plan which feature two-running backs. Now, Yurcich has his own style of offense, different from the team’s shown in the videos below, but this is to give a general idea of running concepts I think would benefit the Cowboys.

In the first clip, I show 2015 Ohio State running a two-back set. The quarterback, J.T. Barrett, sends Curtis Samuel into motion to lineup on his right side, with Ezekiel Elliot on his left. Barrett takes the snap and reads the middle linebacker, as the linebacker follows Samuel on the flare, Barrett hands the ball to Elliot on the tight zone run up the middle.

If the linebacker where to bite on the inside run, Barrett could keep the ball and run the option to the left with Samuel. I know Taylor Cornelius doesn’t have blazing speed, but he is athletic and could handle this triple-option type concept. The split backfield here allows this concept to be run to either side, which always keeps the defense honest and increases the likelihood they overthink and may a mistake.

The next clip shows Kevin Sumlin and Noel Mazzone’s 2017 Texas A&M squad. We see the Aggies lineup with two backs slightly behind the quarterback in the shotgun. The quarterback sends the back to his left in motion on the flare and takes the snap giving it to the back to his right on the counter trey.

They also throw out of this formation.

And run it in short yardage situations.

For my last set split-back formation, I wanted to take a look at OU from last season to show how the backs can be utilized in the passing game. In the first clip, Baker Mayfield fakes the inside run to Rodney Anderson and dumps it to Trey Sermon in the flats. The defense bites hard on the run fake and Sermon is able to pick up some solid yardage.

Lincoln Riley utilizes a variety of unique screens and concepts to get the running backs the ball in the passing game, and with Justice Hill’s ability to catch the ball and get up field, I would really like to see the Cowboys implement these concepts into their offensive strategy.

In addition, having Bob Stitt as an analyst will hopefully add some creativity to the screen game and passing game to the backs.

Speaking of getting the running backs involved in the passing game, one way I would like to see this done is through the wheel route. Simply put, the wheel route consists of the back running out towards the sideline and then darting upfield. We saw Baker Mayfield and Rodney Anderson use it against the Cowboys last season.

(I know, I’m sorry for bringing it up)

As well as Penn State run it to perfection with Saquon Barkley on multiple occasions.

We’ve seen past Oklahoma State teams have an affection for the flare and hitting the running back in the flats.

Well, when the defender starts to over commit to these routes, why not have an option for Hill and the other backs to turn their route into a wheel? Additionally, if the running back sees there’s man coverage or a blitz, he could turn this route into a wheel route. If the back is able to get a linebacker in man coverage, he will almost always have the advantage and be able to gain a step or two on this vertical route.

Another great thing about the wheel is it can be used to clear out defenders to hit a receiver, such as Dillion Stoner or Jalen McCleskey, on an underneath route.

According to The Inside Zone, the concept of the bunch formation is to “bunch two or more receivers in one area in order to create confusion for the defense and allow receivers to get a clean release.”

Against press man coverage, the defenders will be crowded in one area causing the possibility of collisions, and against zone, it creates positive numbers for the offense. It also allows the offense to put their top receiver on the opposite side of the bunch which increases the likelihood of one-on-one coverage for that receiver.

(clip from Inside the Pylon)

In addition, the bunch can create inside running lanes by causing the defense to over commit to the receivers on one side.

The Cowboys have shown a bunch formation with their receivers a few times in the past, but it has never really been a common set in their offense. I would like to see it utilized more often, especially with the talented receiving corps OSU puts on the field year after year.

Adam Lunt and Thomas Fleming brought up different blocking schemes and counter actions in a Chalk Talk Discussion from several months ago. With the Cowboys having one of their deepest and most talented offensive lines in recent years, it would be great to see them implement some different types of blocking schemes and possibly open up some more holes in the running game.

and he’ll pull both guards on this “buck sweep”.

The ability to pull any lineman and move them around in space can open up some interesting things for your running game. With Oklahoma State having a lot of size and athleticism on the offensive line this season, I think they could definitely incorporate some of these pulling concepts into their scheme and possibly open up more running lanes for Justice Hill and company. That’s is a scary thought to put in the minds of opposing defensive coordinators.