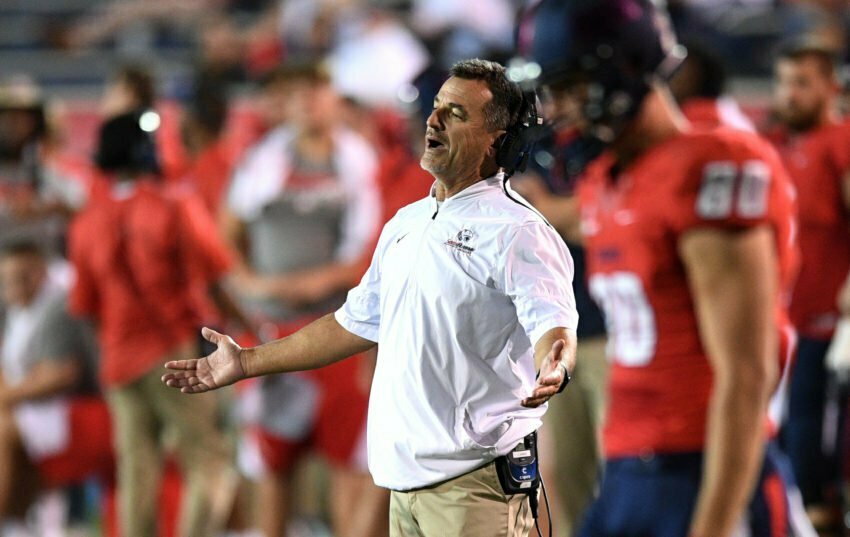 This week, Oklahoma State will face a first time opponent, the South Alabama Jaguars, on the road in Mobile, Alabama. It’s a program that I, like many of you likely, don’t know a lot about.

That’s why we reached out to Adam Luckett of the SBNation site Underdog Dynasty. He’s been covering the Sun Belt for the site for a little while now. Adam was kind enough to answer some questions and provide some solid insight into the Jaguars.

That includes why he considers the Jags to be inconsistently consistent, who the best players on offense and defense are, and why you shouldn’t expect much of a crowd Friday night. I’ve included the full audio interview and hit some of the highlights below.

Phillip Slavin: South Alabama is a first-time opponent for OSU this year. Last year, the Jaguars knocked off Mississippi State. So what’s different from last year to this year for South Alabama?

Adam Luckett: South Alabama is a program that’s in their sixth year in the FBS so they’re fairly new, pretty young team. Actually since they joined the FBS they’ve yet to post a winning season even though they’ve been to two bowl games, in 2014 and in 2016. It’s really been a volatile program under Joey Jones. Inconsistently consistent really is what they are. You don’t know from Saturday to Saturday what you’re going to get from the Jags.

Last year’s the perfect example. They opened up going to Starksville as a 28-point dog and pulled off a win over Mississippi State. Then the week after that they lose at home to a Georgia Southern team that goes 5-7. Really, kind of get smacked.

Then a few weeks later they host an FCS Nicholls team, and they have to go to overtime to beat them. Then the following week they beat San Diego State, a team that finished in the 25, by 18 at home.

Year in and year out coaches say that they have the most talented roster in the Sun Belt. They bring in a lot of junior college players each year and they’ve got talent at the skill positions. They’ve got a running back named Xavier Johnson that’s going to end up leaving as the program’s all-time leading rusher. Then you’ve got a front seven on defense that’s really, really got some nice players, including some FBS transfers at their defensive end position.

They’re a team that because of their talent can give bigger teams some real problems, but have a problem staying consistent.

PS: On the offensive side of the ball, who is the one player OSU fans should know about going into the game?

AL: Outside of Xavier Johnson, who’s the program’s leading rusher, I would say Jamarius Way, a junior college transfer. 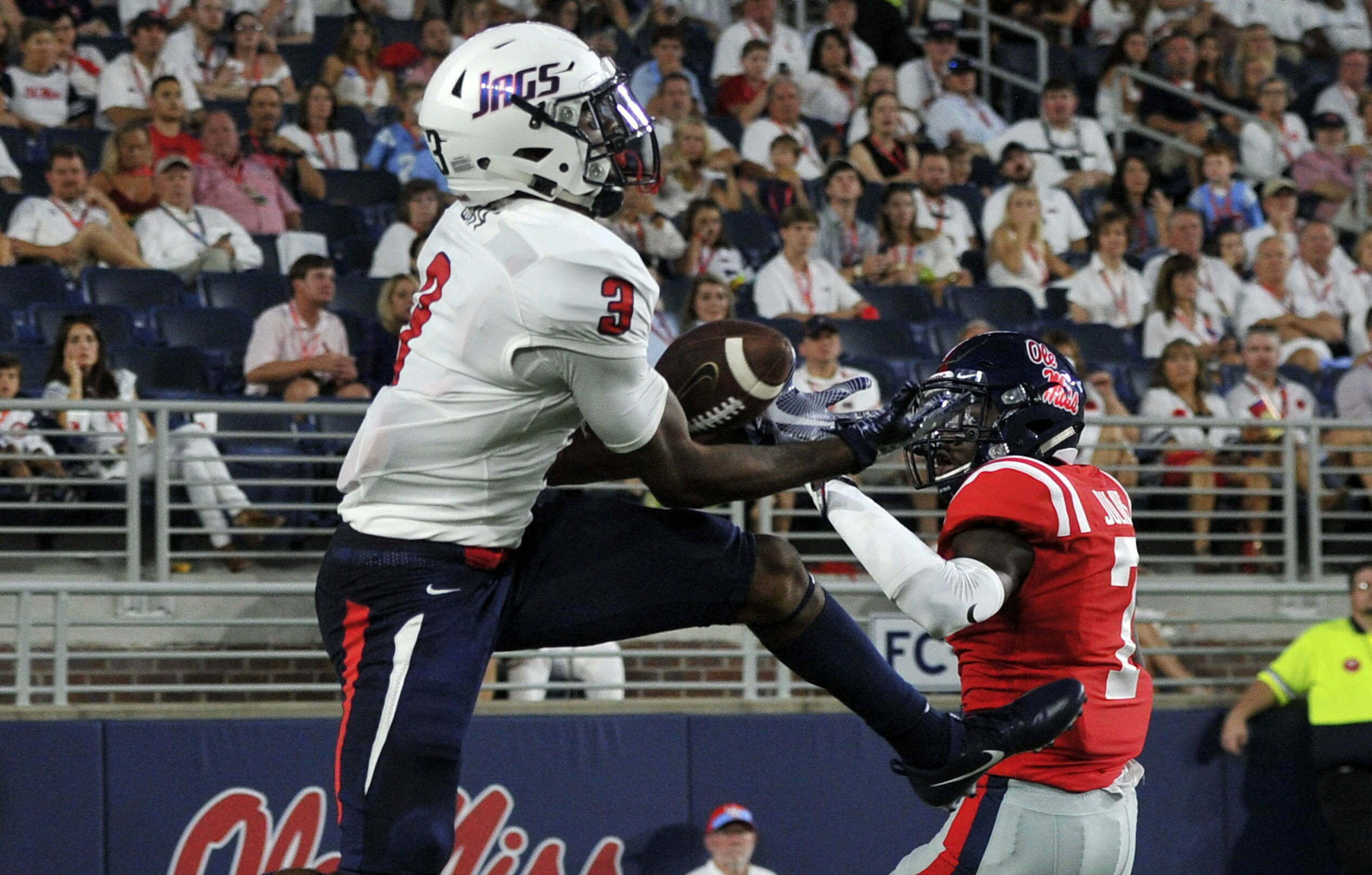 He just played in his first game at the FBS level. He recorded two catches for 42 yards. The long one was for 30 and that was for a touchdown. He was a guy that the coaching staff gushed over all of fall camp. Really big receiver, 6-foot-4, 215-pounds. So he’s a guy that they really like and think will emerge as their go-to receiver. In a game like this ,Oklahoma State is going to put some points up on the board, so South Alabama is going to have to air it out. That’s the guy I think they’ll (OSU) need to keep an eye on and keep bottled up so they can really cruise to a comfortable victory.

PS: A team’s offense is reliant on its quarterback. Tell me a little bit about South Alabama’s quarterback Cole Garvin. 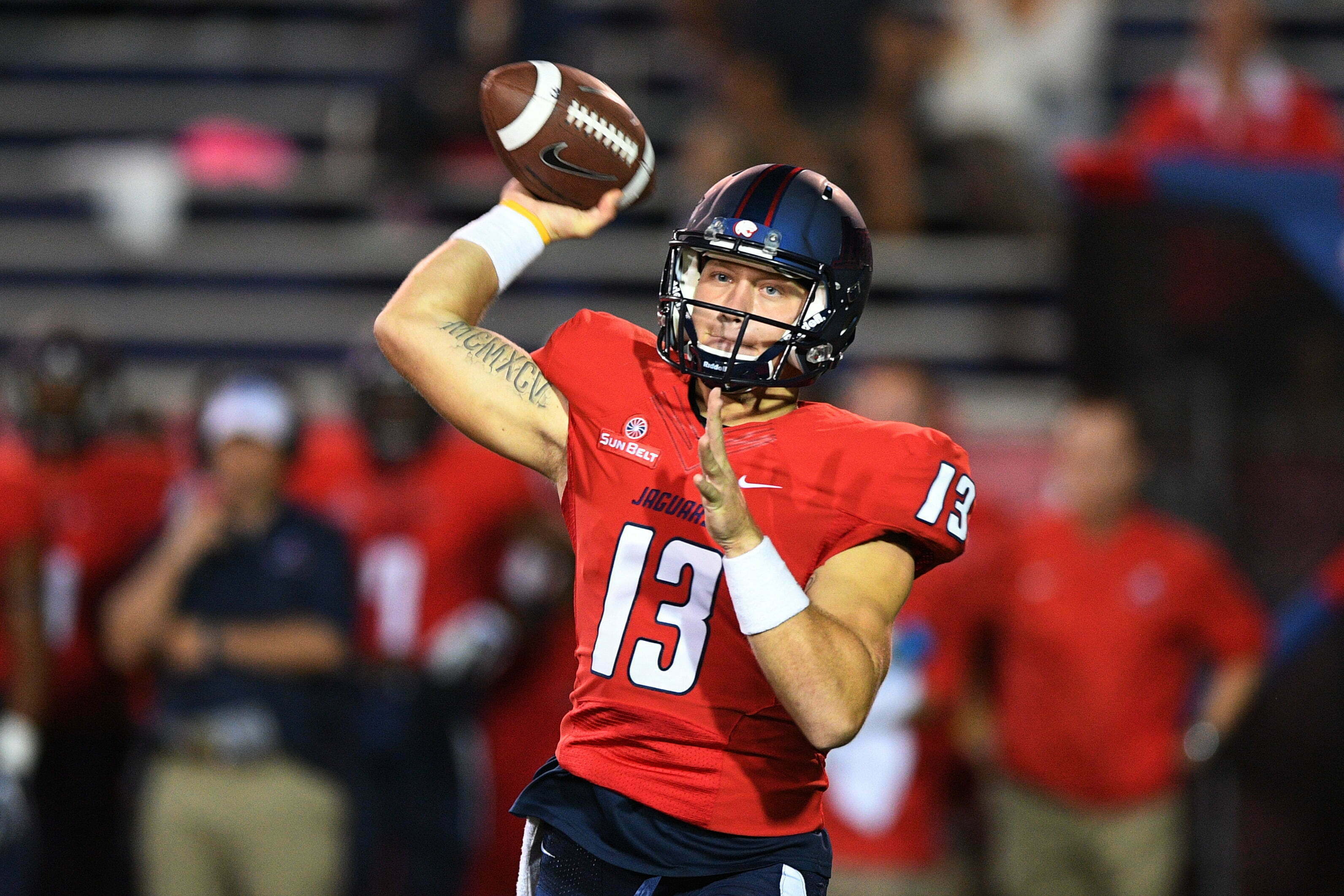 AL: Garvin played decently well in his first game. However, at the receiving position they lost a lot off last season. That’s the reason the staff is so dependent on Jamarius Way. They lost their top five receivers from last season.

You saw it in the last game; Garvin completed 19 passes but they were to 10 different receivers. They’re kind of fishing for answers there. He’s not going to blow you up, but he’s manageable and he’s serviceable. He usually doesn’t turn the ball over, so he’s not going to put you in bad spots, he’s going to put the team in good position all night. But, I don’t think he’s a quarterback that you can say ‘hey go out and win us this game.’ He’s more of a game manager-type as of right now.

PS: OSU is going to put up points. On the defensive side what is going to be South Alabama’s game plan to slow OSU down and which player might have the most success against the Cowboys?

AL: The strength of the South Alabama defense is in their front seven. Middle Linebacker Darrell Songy returns for his senior year. He was a former player at Oregon State before going to junior college. Had 100 tackles and 7.5 tackles for a loss last season. So he’s really strong. They believe they’re about eight to ten deep on the defensive line. They’ve got two power-5 transfers in Finesse Middleton (DE) who transferred from Louisville. Then Rocel McWilliams (DE) who transferred from Missouri. But the best player on the defense will be safety Jeremy Reaves. 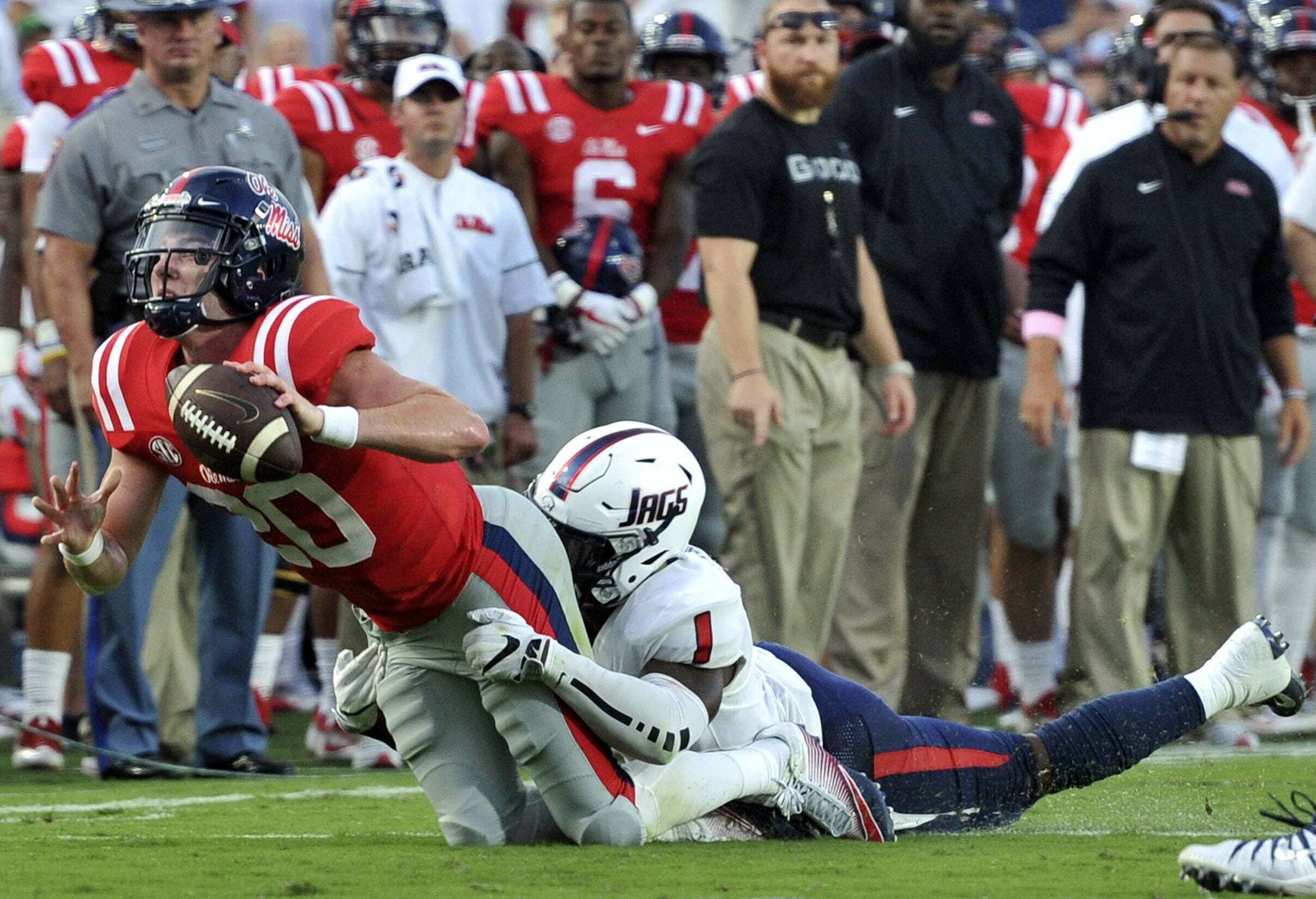 He was an all-conference performer last year. Against Ole Miss he recorded a sack, two tackles-for-a-loss, and a pass break-up. He’s the guy that makes a lot of defense for the defense, but the strength is up front.

PS: The game is on the road on a Friday night in Mobile, Alabama. What can we expect from the crowd? 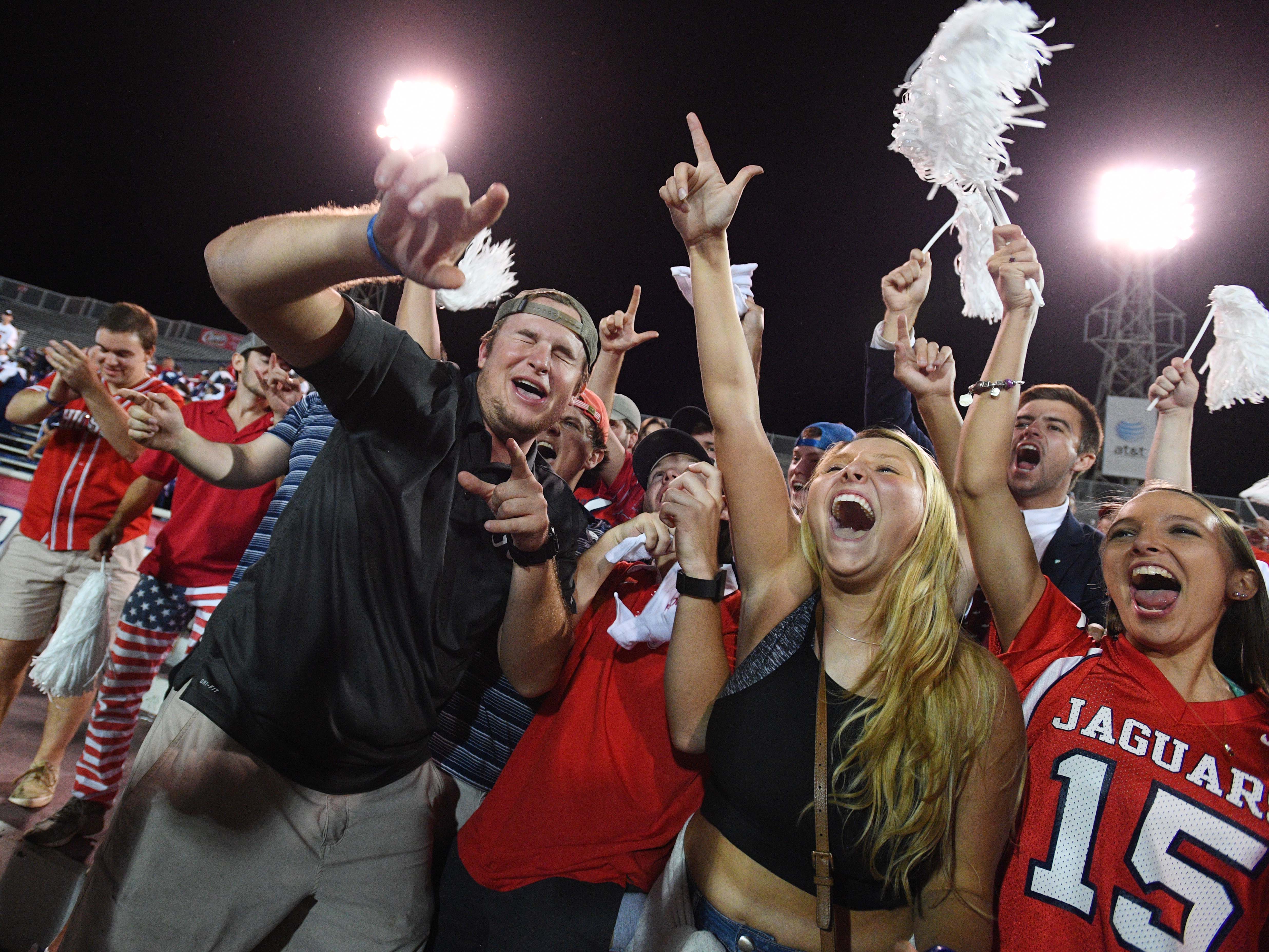 AL: I wouldn’t expect a very big crowd. Usually they don’t really pack it in. They’re at Ladd-Peeble Stadium. It’s a decent size stadium, roughly 33,000. But the South Alabama fan base … unless Troy is coming in, their in-state rival, it doesn’t usually get packed. The reason the Troy game get’s packed is all the Troy fans come down.

Just for example, last year for the San Diego Stage game they only had 14,000 at the game. Now, for the Oklahoma State game there’s going to be more than usual, but it’s not a crazy home field advantage for the Jags there. So it should be one of the more comfortable atmospheres the Pokes play in this fall on the road.

This is a young program. They’re trying to build up and start something. They’re the fifth school in Alabama. You’ve got Alabama, Auburn, Troy, and UAB, who’ve been playing football a lot longer. Troy of course has a great winning tradition. So they’re really trying to climb the ladder and build up fan support.

Now you will get more random fans going to this game because of Oklahoma State, because they want to see Mason Rudolph and James Washington. But, with it being on a Friday night, and with high school football going on, I wouldn’t expect a huge crowd there.