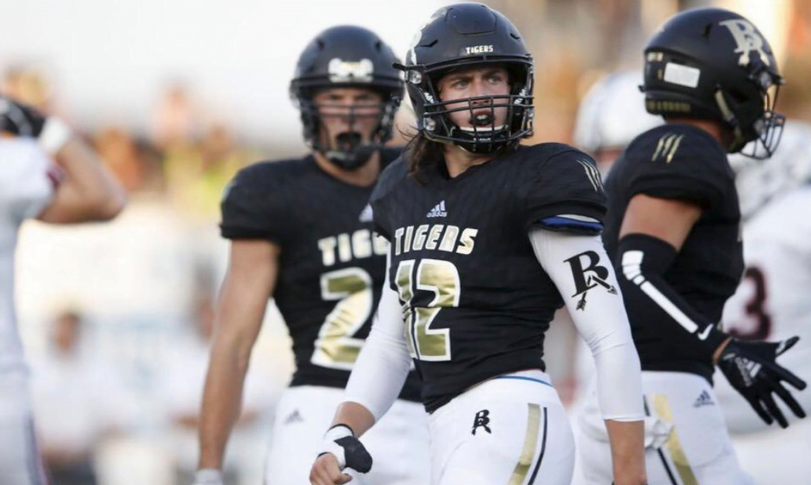 He’s signing with Les Miles and the Jayhawks.

Folks, Gavin Potter Instagrammed himself in a Tech uniform yesterday, then walked into his signing with a KSU hoodie on, and then chose THE KANSAS JAYHAWKS. Troll level ? might be my new favorite Jayhawk. What a steal by Les Miles. pic.twitter.com/pPh2u1IBcb

Here's the video of Gavin Potter's (@Gavvin_12) #NationalSigningDay2019 reveal and his comments on #Sooners #Okstate. Going to be fun to see @BrokenArrowFTBL star get on the field for @KU_Football against all these #Big12 rivals pic.twitter.com/KY5VOVgjpn

The pre-planning that went into this troll job is really next level. He managed to leave Tech fans upset (which is always a great choice), then K-State fans in tears (probably) by flipping to the in-state program that came out of nowhere. And all while spurning in-state OSU! I’m already a little perturbed this amount of swag is leaving the state to play college football elsewhere.

Potter played linebacker for state title-winning Broken Arrow and rose up the recruiting ranks in the days and weeks leading up to signing day. At 6-1, 200 pounds, his frame was the only concern that likely kept him from racking up dozens of offers. (I look forward to Les Miles and Co. running the wishbone with him against OSU this fall.)

OSU’s class is all but settled (or maybe completely settled) as of Wednesday morning, however. With four-star Deondrick Glass making things official, there may be but one more spot to take a player in 2019, which could be reserved for a mid-year transfer, graduate transfer, or a late-qualifying high schooler.