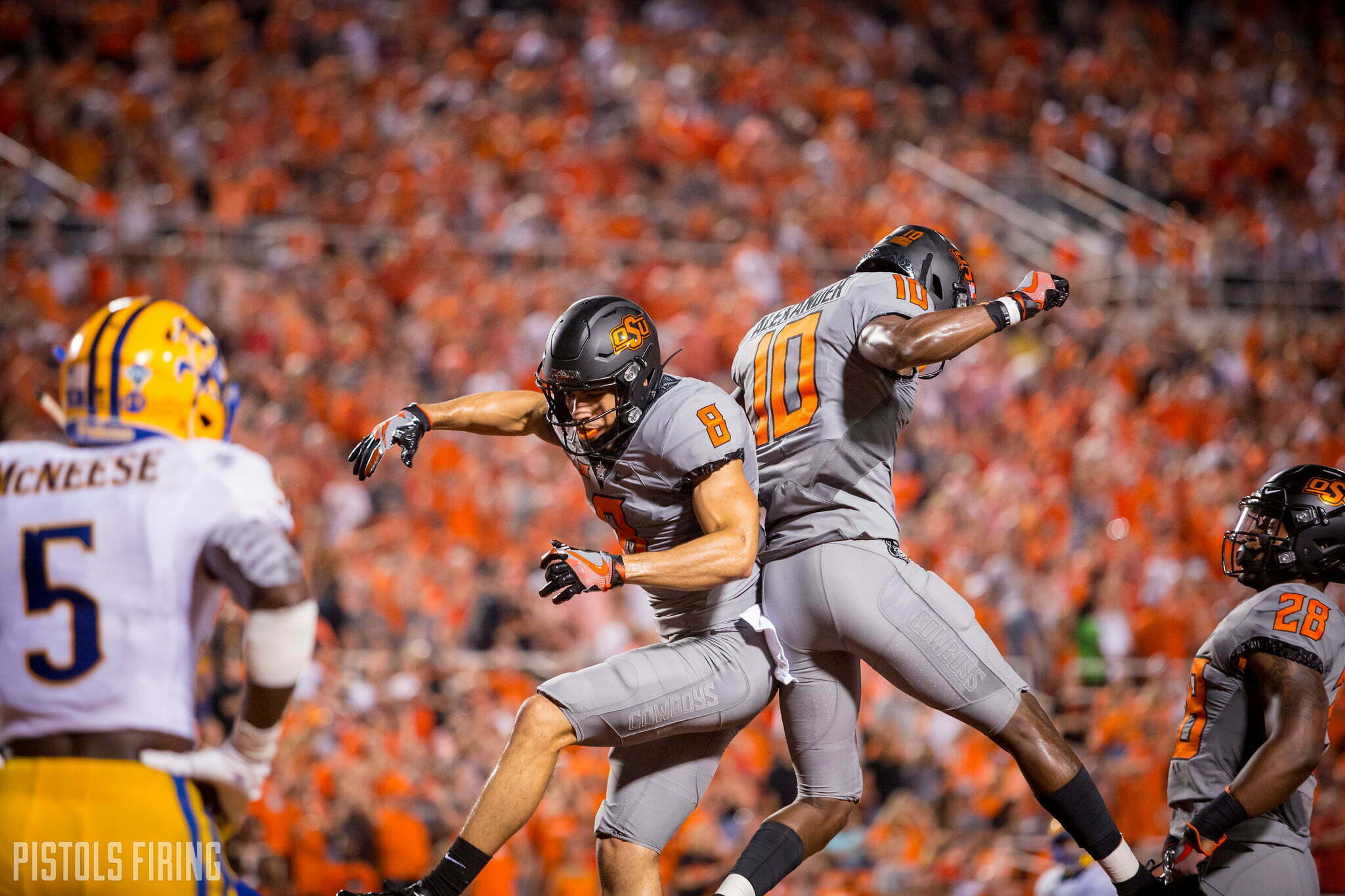 Oklahoma State has had its fair share of superstar wideouts over the years, and Tylan Wallace falls right into that category. But some of the scariest Cowboy offenses we’ve seen have featured a productive, if not prolific, No. 2 option in the passing game.

It makes sense. If you have someone opposite your Biletnikoff-favorite stud who can break free for his own #SCTop10 play at any time, that just further stretches the defense and you’re all the better. Conversely, the other guy has the pretty enviable role of playing alongside the other team’s biggest fear which comes with its own perks — like a hell of a lot of single coverage.

Target No. 2 can be anyone who makes plays, but the Pokes have been especially potent with someone outside, or around the opposite hash mark of, their Ace. Think Marcell Ateman to James Washington, or Tyron Johnson to Tylan last year. Even Adarius Bowman had a young Dez Bryant drawing attention and spreading thin other teams’ secondaries.

Through one-third of the 2019 season, no one has quite taken up that mantle of clear-cut WR2, but we have seen promising signs from a few dynamic, young receivers. Let’s look at what we know about, and what we’ve seen from, OSU’s other receivers and suppose who is the best candidate.

Stoner is the actual No. 2 because he’s second in receiving yards, catches and targets. Stoner’s not the sexy pick, mainly because he’s been around for a while, but he’s been productive throughout his career and that’s continued this season.

I know I highlighted the 6-3 to 5 crew above, but OSU has been plenty powerful with a dynamic slot man at option No. 2. How about Josh Cooper, David Glidden or even Jalen McCleskey (he was especially productive and effective in 2016 and 2017)? Stoner is good enough athlete to fill a similar role.

Some have soured on Stoner because of his untimely fumble against McNeese and his here we go again drop at Texas, but he’s actually been one of OSU’s more sure-handed receivers this year. Stoner’s 81.8 percent catch rate is second on the team behind only our next candidate.

I didn’t have super high expectations for the former South Alabama transfer coming in. I just thought he lacked the upside that some of the younger members of OSU’s receiving corps possessed. But in his limited time within the sights of Spencer Sanders, McCray has made me a believer.

McCray’s looks have been a bit sparse but he’s been efficient. He’s caught seven of his eight targets with a solid 9.6 yards per target. McCray may not have the upside of some of the others on this list and — and it’s a small sample size — but he appears to be more than adequate as a Nos. 2-3 option.

Landon Wolf and Dillon Stoner are both redshirt juniors. My mind cannot absorb that statement.

During his tenure at OSU, Wolf has proven to be a capable and, at times, electric option from the slot. He’s caught eight of his 11 targets so far in the early goings and can not only be the safety valve for a first-year QB1, he can also break one loose for a big play when you least expect it. 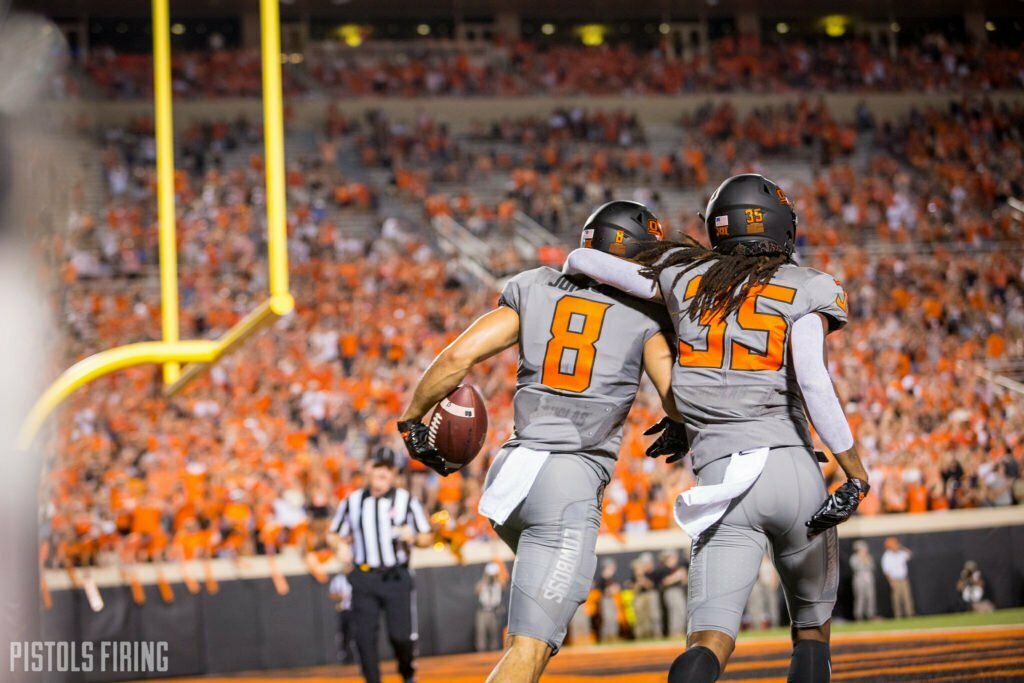 Here’s where my hyperbolic knee-jerk impulse takes over.

Oklahoma State has plenty of young receiving talent, but two guys in particular have jumped off the screen at me so far this year — even though they share a combined eight targets through four games.

These guys may not earn Spencer’s second glance immediately, but either one could be a solid No. 2 of the future — or even Tylan’s heir apparent by season’s end.

He’s been likened to Wolverine and claimed to be able to beat Chuba in a footrace, but coming into 2019 there wasn’t a lot we knew about Braydon Johnson and his potential at the college level.

That got cleared up quickly.

Johnson has shown himself to be the type of deep threat that can take the top of a defense. Through four games, his targets have been spotty — actually just one target in each — but he’s paid them off with three catches for 126 (third on the team) and a touchdown. That’s 31.5 yards per target (!).

I could get used to a healthy does of this for the next two years.

OSU’s third-highest rated receiver prospect ever (behind only Tylan and Dez 👀) needed a year in the program to get acclimated to the rigors of next-level college football. Moore appeared in the Cowboys’ bowl win over Missouri last year, but didn’t draw a target.

Apparently a redshirt year did him good.

He’s not yet arrived from a physicality standpoint, but Moore’s put in the work and it’s paid off so far. The freshman (also with three catches on four targets) has 75 yards and two TDs.

Moore’s got the pedigree, the frame and tangibles and, apparently, the playmaking ability to not only take on a bigger role in the offense this year, he could be the next superstar receiver to come through Stillwater.

There are plenty of other candidates to step up like LC Greenwood, Langston Anderson, Jonathan Shepherd, Patrick McKaufman and more who should each get a chance to earn playing time. Unfortunately you can’t field six receivers but this is a good problem to have.

We also have to remember that Spencer Sanders is still feeling his way through this offense and continuing to build rapport with his receivers. The coaching staff is also still building confidence with these guys and sorting out who they can depend on. The good news is that OSU’s receiving talent pool is as deep as ever.