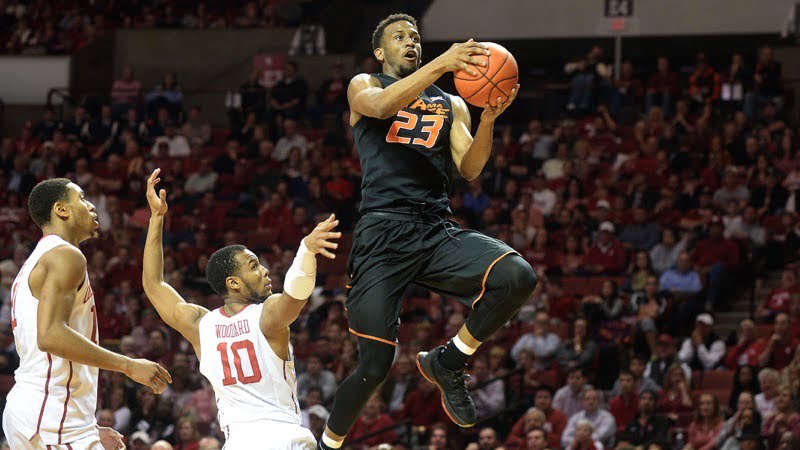 It’s important to remember a few things in all of this. 1. Travis Ford has not been fired. I saw my guy Kyle B. got crushed a little on Twitter last night for saying he was tired of the #BringDougHome stuff. I understand where he’s coming from, and I’ve tried (probably more in my head than in reality) to always bring everything back to the fact that Travis Ford is still the head coach at Oklahoma State and we still have a team to cover.

It’s a little bit unfair to all parties to act as if we exist within the hypothetical of Doug Gottlieb (or anyone other than Travis Ford) being the coach at OSU. Can we discuss the future? Sure (I’m about to). Can we talk about reasons why Ford should not carry on as the coach at OSU? Yep. But the reality on February 25, 2016 is that Ford has not been fired and that this team still (theoretically) has a chance to go to the NCAA Tournament. We shouldn’t write, talk about or act as if Doug Gottlieb is already the head coach at OSU.

The second thing to remember is that real human beings are involved here. There are numerous rich human beings, but they’re still human beings. Travis Ford has kids. Hid kids are on Twitter. His wife has friends in Stillwater. The players who play the games are on social media. These are all real things. It’s easy to justify a 2D avatar as nothing more than a 2D avatar and forget that it’s the representation of a living breathing 3D human. I’m not sure why I felt obligated to touch on this but I did.

All of this ultimately comes back to what is your expectation for the Oklahoma State basketball program. I’ve seen arguments on both sides. He’s gone to three straight NCAA Tournaments! He hasn’t defeated OU since Wes Lunt was still at OSU! He’s had six winning seasons in seven tries! He legitimately cannot beat good teams!

So expectations. I mentioned this on the podcast the other day, but our expectation (I believe) should be that OSU is playing to get into a Sweet 16 on average every year. Not that OSU makes it to the Sweet 16 every year. But that they’re playing a second round game to make it happen. That’s on average. So some years you lose in the first round and some years you make it to the Elite 8 or whatever. Ford has played to get to a Sweet 16 one time in eight years. That’s not a good average.

The other thing on average is that you should finish in the top five in the Big 12. On average. The Big 12 is tough but that doesn’t feel like a lot to ask. After this year, Ford will have done that twice in eight tries. And because of tiebreakers he will have gotten a seed in the top half of the Big 12 Tournament one time. Again, his average has been worse than my expectation.

The $7M+ Ford is owed is a big problem. A really big one. Berry Tramel outlined that here. It’s a lot of dough and I get that. One reader (fine, my dad — Grandpa Pistols) had two good ideas as it relates to the money problem:

• Since it’s getting close to his contract expiration, go to Mike Gundy and renew/renegotiate his contract early at a higher salary, but defer a chunk of it (with an inflation factor) until he turns 60 or 65.  Holder frees up extra dollars now to pay off Ford’s buyout — Gundy doesn’t need the money now anyway, he still gets a raise, and the deferred income is taxed a lower rate when he receives it.

• Another thought I had (which would be something Holder could be on the forefront of) is to pay a minimal base salary plus $10 per paid basketball attendee.  Example: $500k base salary plus (16 home games X average attendance of 7,000 x $10 = $1.21MM) = $1.71MM total salary.  If he maxed out at 13,000, total salary = $2.58MM.  Would accomplish two things — nice incentive for a new coach and actual attendance would be reported correctly.  Attendance will reflect the product you have on the floor — see OU.

I also said this to Carson on our podcast and it bears repeating. Can we all agree that no matter who you hire, if his name isn’t Bill Self, it’s going to be a crapshoot in terms of wins and losses? I’m sorry but it just is. My buddy Quade brought this up last night, and I thought it was smart. If revenue is an issue (and it is). And if your next hire is a crapshoot (and if it’s not Bill Self, it is). If those two things are true, then the most logical thing to do is to bet on what’s assured.

And what exactly is assured? Let me explain. Let’s prop Archie Miller (Dayton) up as the candidate next to Gottlieb (a lofty idea, I know).

In the short term, Doug would fill up GIA whether he wins or not (I think) so you’re not really betting on Doug winning at all in the near future. You’re just betting him on him being charismatic and Josh Holliday-ish for a year or two. You’re betting on him, well, being Doug. Sign him to a three-year deal. See what happens. It actually would be a safer bet to nab Doug and fill the joint up ASAP than it would be to get Archie Miller or Gregg Marshall or whoever and pray they have the same success in the Big 12 that they had at mid majors. And if it doesn’t work out with Doug then you’re right back where you started in three years with little to no harm done to the program as a whole.

That sounds absurd, I know, but it’s kind of true.

We will talk more about this after the season — when, I believe, Ford will be let go of by Mike Holder. Just whetting the appetite for now. Has that Canadian RB committed yet?