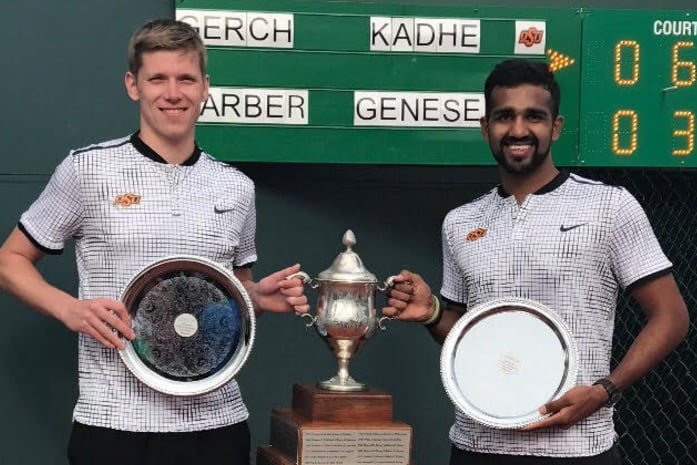 Welcome back to this week’s all-sports roundup featuring the non-revenue sports like tennis, women’s hoops, and softball. In this week’s edition, the Cowgirl basketball team’s season ends in OKC, tennis thrives, and softball has solid weekend at home.

Entering the tournament as the No. 7-seed, the Cowgirls (17-14, 6-12) faced an uphill battle to return to the NCAA tournament. The Cowgirls were able to withstand a late rally from 10th-seeded Kansas to advance to the quarterfinals to face 2nd-seeded Texas.

Too much firepower from the 12th ranked Longhorns put the game out of reach before the 4th quarter started and effectively ended the Cowgirls and their five seniors’ 2016-2017 campaign.

Final from OKC. #okstate's tournament run comes to an end against Texas. pic.twitter.com/4SejiUa2WA

Don’t look now, but the OSU men’s tennis team has ascended all the way into the top five nationally. A highly successful weekend trip out west began with the Cowboys 6th top-25 win of the young season already as they took down No. 9 Michigan 4-1.

Final score from La Jolla. #okstate knocks off No. 9 Michigan and picks up its sixth top-25 win of the season to improve to 11-3! pic.twitter.com/cflkwGba3u

Several Cowboys were also invited to play in the 128th Pacific Coast Men’s Doubles Championships in La Jolla,California. This prestigious 128-team event features elite doubles teams from around the country. Four Cowboy doubles teams participated in this event including the top overall seed pair of Arjun Kadhe and Lucas Gerch.

The tandem of Kadhe and Gerch managed to navigate through the lengthy field and reach the finals where they won in comeback fashion over USC.

What a day for two of our seniors. #okstate pic.twitter.com/Hqp7NwFOcy

The hard fought finals victory gives Oklahoma State their 3rd championship at this event with wins in 2014 and 2015. Arjun Kadhe this weekend also set an OSU record winning his 93rd doubles match, putting him alone atop the all-time wins list. He had this to say about the special moment.

“I feel really humbled and thankful for the opportunities I’ve gotten at Oklahoma State,” said Kadhe. “Those opportunities made it possible for me to become the one to get the highest amount of doubles wins in the team’s history. Reaching 100 doubles wins is the next landmark for me and it’s on my list so it’ll be pretty cool if I can reach it.”

Next up for the Cowboys are home tilts against No. 35 Memphis and San Diego State this coming weekend.

Ladies and gentlemen, Oklahoma State has a new all-time doubles wins leader and his name is @ArjunKadhe! #okstate #KadheCounter pic.twitter.com/UMU98GlAQ1

The Cowgirls played two matches over the weekend in Seattle, scoring victories over No. 25 Washington and No. 38 Northwestern. The highly successful weekend in the northwest saw the Cowgirls (10-3) rebound from losing only their second double point of the year.

With Big 12 play starting this next week with a home match against No. 13 Baylor, large crowds are anticipated to watch OSU repeat as Big 12 champs. If you’re in town, go out an support these women during conference play.

We've got a top-15 matchup at the Greenwood Tennis Center on Thursday, as #okstate hosts No. 13 Baylor to open Big 12 play! Free admission! pic.twitter.com/pQiG5d8JLy

The Cowgirl softball team participated in the Mizuno Classic, a 3 day tournament in Stillwater. The weekend saw the Cowgirls win four out of five games to improve their record to 12-9 on the year. The ladies had a chance for a perfect weekend but dropped their last game to Northern Iowa Coach Kenny Gajewski had this to say following the loss.

“Good weekend as a whole,” said Gajewski. “We did some good things. We’re starting to swing the bats a little bit more. We’re starting to get some more hits. We’re continuing to walk and stuff, so I feel better about that. Defense was solid for the most part. I think we’ll continue to improve there, but it’s just tough when it’s the last day.”

Next up for the Cowgirls are home battles against Wichita State and Evansville on Tuesday and Wednesday respectively.