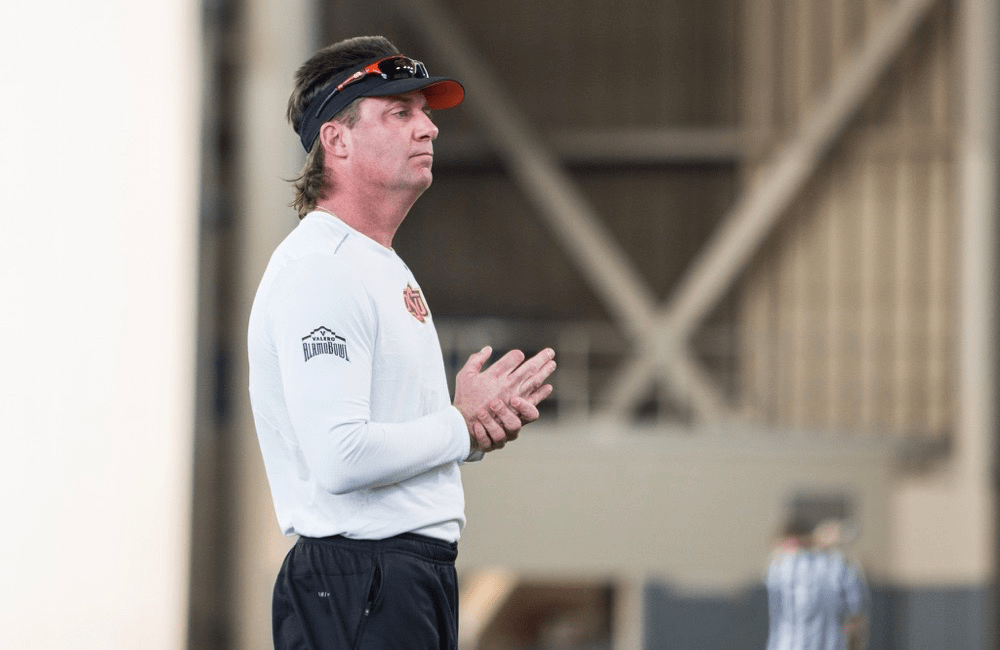 Mike Gundy spoke to the media for the first time in an official capacity this spring on Monday at Boone Pickens Stadium. He rocked the mullet, wore dad jeans and said a lot of interesting stuff. Let’s jump into 10 takeaways from the hour-long presser.

1. Our team will dive into this more in the coming days, but apparently Ramon Richards is moving to safety, at least part-time. That’s a bit of a shocker to me given the lack of depth at cornerback and Richards’ relatively diminutive stature (can he roll with guys like Tre Flowers and Jordan Sterns?) although, as some people pointed out, Richards played a little there last year.

It’s worrisome that OSU is now going into the season with little to no experience at one of the most vulnerable slots when it comes to Big 12 play, but I suppose the optimist looks at this and says, “Gundy must love OSU’s young corners.”

2. Gundy is insistent on potentially having a J.W. Walsh-like package for one of his backup quarterbacks. Should they? Last year the Pokes were 25th in red zone scoring but just 58th in red zone TDs. I can be talked into having a J.W. package, although I didn’t hate No. 2 running it a little at the end of last season. It’s true that they need to be better when it comes to scoring TDs in the red zone, but I get antsy any time the ball is taken out of No. 2’s hands.

3. Is Oklahoma State going to play a freshman at left tackle? Mike Gundy said it could as UAB transfer left tackle Victor Salako will be replaced by redshirt freshman Dylan Galloway. But as Kyle Boone wrote about last week, Cal transfer Aaron Cochran seems like the more likely player to fill this role should he go ahead with the transfer to Stillwater.

4. One of the other big moves on defense is Kenneth Edison-McGruder going from safety to linebacker. This isn’t nearly as stunning as Richards moving to safety given Edison-McGruder’s size (6-0, 220 lbs.) and the fact that he played there in the Alamo Bowl, but it’s worth noting.

He notes that they are deeper in 2017 but have to “hit a couple of corners.” That’s true, and hopefully they will be able to add Clemson transfer Adrian Baker to the mix.

6. Given the pieces returning, Gundy noted that OSU would probably use more four-wide sets than it has in the recent past. I want to praise Gundy here, but let’s be honest, only a fool would not use as much of James Washington, Chris Lacy, Marcell Ateman, Jalen McCleskey and Tyron Johnson as possible. Gundy is no fool.

7. On the backup QB race, Gundy thinks Jelani Woods could weigh 270 lbs. Two-hundred and seventy pounds! A quarterback! Carson about lost it on our podcast on Monday over this news, and it is significant. The race for QB2 should be one of the best storylines this spring, although I guess if I’m betting I have to bet on the guy who could weight 270 pounds and throws lasers all over the field.

Mike Yurcich getting his first chance to work with freshman QB Jelani Woods. He's every bit of 6-7. pic.twitter.com/jRYOSsWvqb

9. Remember this guy? The pre-fall running back competition will be interesting, and whoever comes away with a spring win will be the favorite to join the mix starting in September with Justice Hill and freshmen J.D. King and Chuba Hubbard. Gundy said on Monday that speedster Jeff Carr could be the best of the RB bunch this spring with Hill out.

Gundy on Jeff Carr: "I would love for him to develop in that (RB) role. But you've got a couple guys that will be right there on this tail."

10. Zach Sinor is literally the centerpiece on the spring media guide. This is the best. Let’s send him to New York for the Heisman presentation. I want Tom Rinaldi to play the piano and make me cry Knoshown Moreno-sized tears as he narrates an existential piece on the history of the punter featuring Sinor.