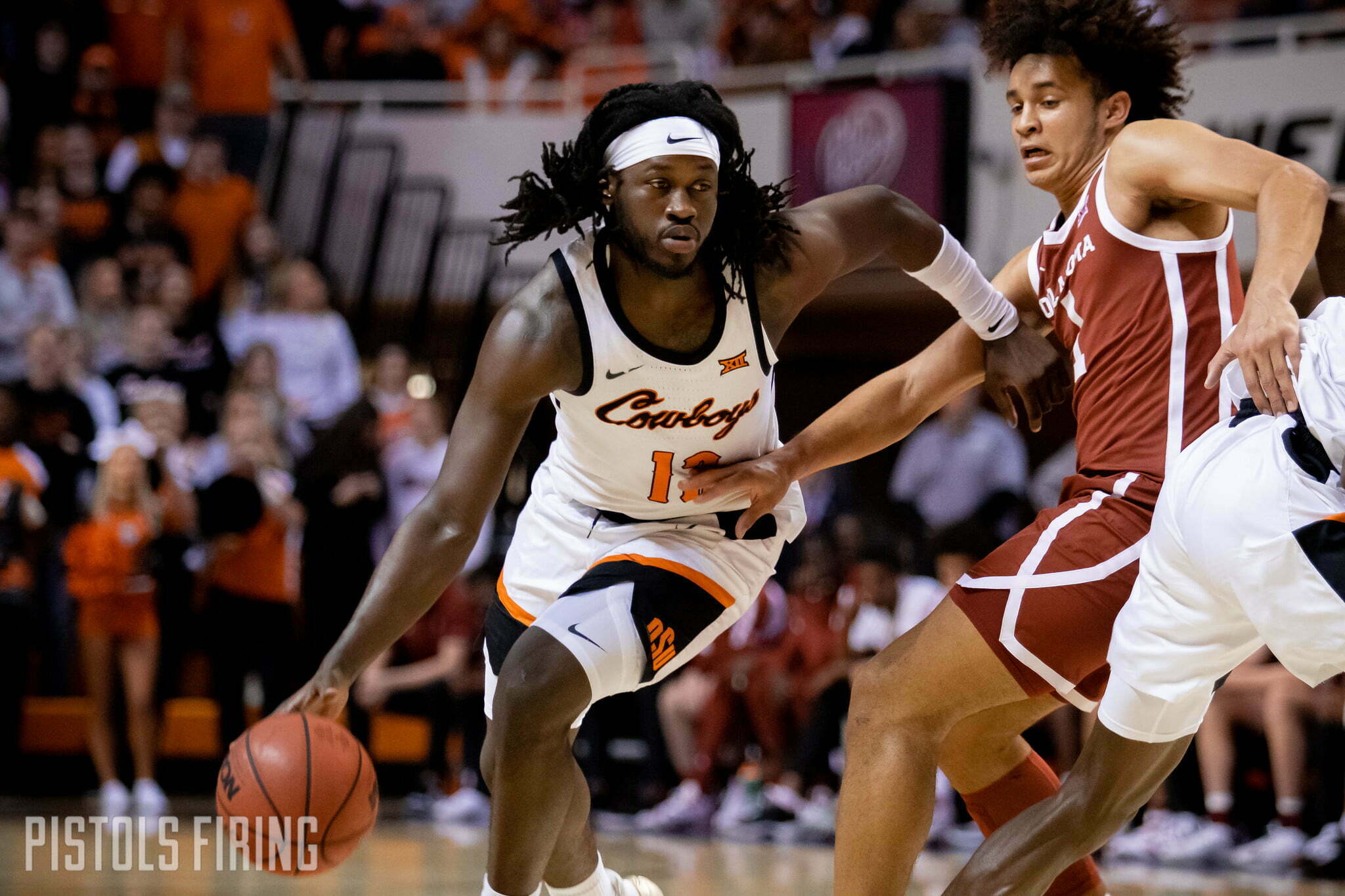 STILLWATER — Points, rebounds and assists — the most basic stats in basketball.

When Isaac Likekele scored his 1,000th career point on Monday, he became the first player in Oklahoma State’s history to have 1,000 points, 600 rebounds and 400 assists in a career — or at least since they started tracking those stats in 1951. Likekele has stuffed the stat sheet like no one in OSU’s history.

Likekele is also one of only 14 players in OSU’s history with at least 150 steals, adding to his stat-stuffing ways. He is the 44th player in program history to score 1,000 points, one of 17 to have 600 rebounds and is fourth on OSU’s career assists list, one away from tying for third.

Byron Houston (1988-92) was more of a post version of Likekele. At a heftier 6-5, Houston is the program’s all-time leader in points (2,379) and rebounds (1,189). He was also great on the defensive end, having 222 career blocks and 159 career steals. He was a better scorer and rebounder than Likekele, but he finished his college career with 209 assists, less than half the amount Likekele has.

Then there are those at the other end of the spectrum like Byron Eaton (2005-09) and Matt Clark (1978-83). Those two had the points, assists and steals, but they didn’t have the rebounds.

“Matt really wasn’t a point guard,” said Barry Hinson, analyst and 1983 OSU grad. “Matt was kind of a scorer. If Matt Clark had a position in softball, he would be a rover. He could play a little bit of everything. But that’s kind of a good comparison body-wise, but still, Matt wasn’t that thick.”

The two closest comparisons from a stat-stuffing perspective are probably Chianti Roberts (1993-97) and Markel Brown (2010-14).

“[Roberts is] a pretty good [comparison],” said Scott Sutton, OSU’s director of basketball administration and Roberts’ former teammate. “That’s a pretty good one. I think Ice played more true point guard than Chianti. Chianti had the ability to handle the ball. He was a freshman my last year, but I’m sure throughout his career he probably handled the point guard duty some. I thought Chianti was a little bit taller, probably a little more explosive, but that’s pretty good.”

There are some obvious differences in the styles of Likekele and Brown. OSU fans probably think of 360 dunks when they think of Brown. Likekele plays his more methodical game that relies on his size and positioning. Keiton Page has seen them both up close. Page played with Brown and is on OSU’s staff as the team’s director of player development.

“They’re both elite competitors,” Page said. “I think that’s probably the most common between the two is they both came out there every night wanting to win really, really bad, put it all out there every time they stepped on the floor.”

Lastly, there are those who would’ve likely been with Likekele at this mountain top if they would’ve played four years of college basketball. Guys like Marcus Smart, Tony Allen and Cade Cunningham would’ve surely hit 1,000 points, 600 rebounds and 400 assists had they had as much time on the floor as Likekele, but those are projections. Likekele’s numbers are real.

The Anatomy of a Stat-Stuffer

Hinson said Likekele has got to have the largest hands of any OSU point guard in history.

Attached to his already long arms, Likekele essentially has baseball gloves as hands. No matter the angle, he can nearly palm every pass that gets thrown to him.

A 6-5, 215-pound player in the 1980s might’ve been labeled a post guy or at the very least put on the wing. But even with that frame, Likekele has been given point guard duties throughout his career.

Hinson said Roberts was probably a good body comparison to Likekele to go along with the stat-stuffing. Hinson also mentioned Cornell Hatcher (1990-92). Also 6-5, Hatcher had 209 points, 167 rebounds, 161 assists and 133 steals in two seasons at Oklahoma State.

To go with his big frame, long arms and massive hands, Likekele also has another big advantage with his body, according to Hinson.

“In basketball, a great butt, or booty, is an intangible,” Hinson said. “Ice is really high on the intangible in that department. That’s probably the best way to say that. You’d never want another man talking about another man’s butt, but his big ole booty has come to be a major asset for him throughout his career.”

As basketball expands with the increased use of the 3-point shot, Likekele is a throwback guy who is at his best offensively when attacking the basket. Of his 1,000 points, only 54 have come from 3-point range.

A few of his high school mentors described Likekele’s style of play as an “old-man game.” He isn’t going to dazzle you with flashes of athleticism like a Markel Brown. He’s going to get you on his hip and go bank a hook shot off the glass.

In OSU’s Bedlam victory against Oklahoma on Feb. 5, Likekele played a team-high 30 minutes. He didn’t score but had a team-high seven rebounds and six assists. He was also a team-best +13 in plus/minus, meaning OSU was 13 points better than OU while Likekele was on the floor. Him not being a dynamic scorer frustrates a certain part of the OSU fanbase, but his coach says the Cowboys couldn’t do it without him.

“I’m as hard on these guys as anybody, but sometimes the things you hear about what people think about these kids is pretty mind-boggling,” Boynton said. “Like, we can’t win without that kid. This team can’t win without Ice. He’s our most experienced guy. He’s been in these battles over and over again. Sure, he doesn’t shoot it well, he’s not the sexiest player, he makes some bonehead decisions sometimes, but when we need to stop, he’s guarding whoever we think is going to get the ball. There’s tremendous value there. His teammates respect him. He’s been through it all here.”

By no means does Likekele being the first player in program history to have 1,000 points, 600 rebounds and 400 assists put him in the conversation as the greatest player to play at Oklahoma State. But his sustained success ought to mean something.

As with the group of Cameron McGriff, Lindy Waters and Thomas Dziagwa, Likekele has been through a lot in his college career. He entered OSU as part of a five-man recruiting class — he is the only one of that group left. Two of his classmates were dismissed from the program and two transferred.

“After I graduate, whatever is left around here in my name, I just want it to be something good,” Likekele said. “Whatever my legacy is, I want it to be stamped in a good light with great players and different things like that, how I affected the people around me, the community, what type of joy I brought to the campus, the team.”