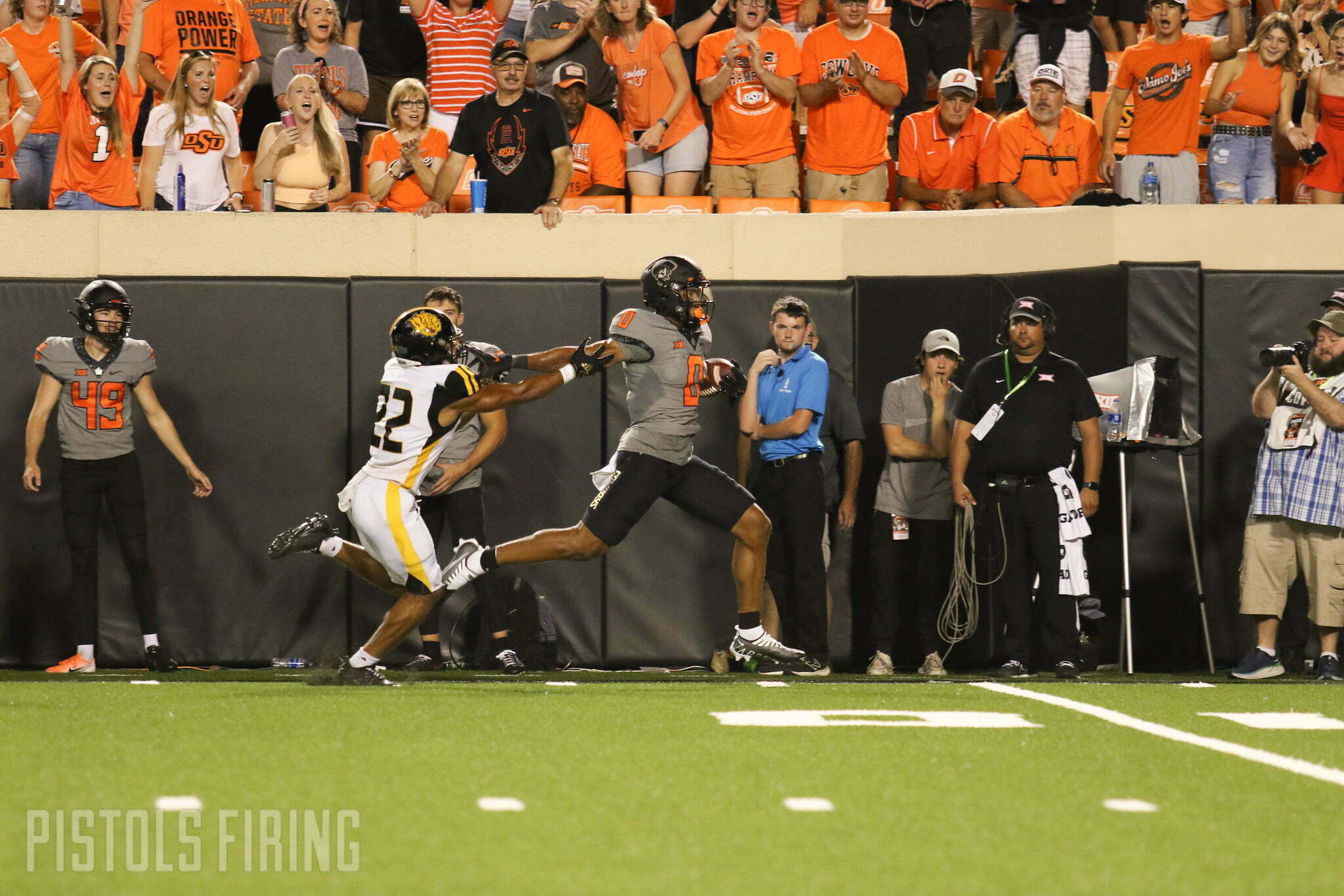 OSU took care of a lesser FCS opponent and heads to the bye week to prepare for a huge Big 12 opener with Baylor. Before we put a bow on Arkansas-Pine Bluff and the Cowboys’ nonconference slate, let’s take a look at some of the most notable happenings and impact players from the win.

I’m going to have to get it to the man who played one quarter, because it was a tight quarter. In one period, Sanders amassed 242 yards and four touchdowns. Not every ball was perfect but it’s hard to argue with a 13-of-16 effort.

As Marshall pointed out in his 10 Thoughts on UAPB, Sanders has condensed his ability to have an impact and produce points down to a QB concentrate. Will he get off the hook in the first half again this year? Doubtful. But over the course of three games, Sanders has shown a new level of ease running the offense. He makes the right decisions, makes his plays count and he’s done it mostly without error. If this is what we can expect of fifth-year Spencer, the Cowboys could be in for a fun season.

Most Concerning: A Fumble Streak

It had just started to rain when the ball popped out of Dominic Richardson’s hands against Arizona State. A teammate landed on it. But it was a strip in the scrum of FCS defenders that dispossessed him against UAPB. This time he wasn’t so lucky.

Either of those could be chalked up to incidentals. These things happen. But the fact that they plagued the Cowboys’ new chief ball-carrier, and were in back-to-back games — and the fact that there is little else we’ll be able to point to from OSU’s starters after this game — makes Richardson’s drops a talking point. Whether or not they continue to be remains to be seen.

“Not in my house!” He did everything but wag his finger toward the UAPB sideline.

Trace Ford’s return was one of the most exciting storylines, for me at least, concerning OSU’s defense. After missing extended time due to multiple knee injuries, Ford looks like his old self again. He’s yet to record a sack this year, but he frequents opposing backfields — and the personal space of its quarterbacks. On Saturday, he was getting his hands on the football.

On one such occurrence in the first quarter, Ford closed on UAPB quarterback Skyler Perry a split second too late to get the sack, but got his hand in his face and stuffed the pass down his throat a la vintage Dikembe Mutombo.

And of course, we can’t forget Ford’s punt block-scoop-and-score. It was one of two blocked kick touchdowns, a first for OSU.

All the Firsts: Gunnar, Talyn, Cale

The quick lead that Sanders and Co. piled onto the Golden Lions allowed Cowboys coaches to get some of their younger, depth pieces on the field, some for their first extended time.

Gunnar Gundy threw his first collegiate pass and turned in a very solid first outing. Talyn Shettron (AKA the hopes and dreams of Cowboys fans everywhere), is a “touchdown specialist.” He caught his first touchdown, as did Cale Cabiness.

In another first from a skill player who could make a big impact this year, “excitable freshman” Ollie Gordon also found the end zone for the first time. OC Kasey Dunn said the offensive staff was yelling so loudly in the booth that Gordon probably heard them on the field.

The key point here — and maybe the single most impactful thing to come out of the gaudy win — is that players who were fully green are a little less so. If Gunnar has to spell Sanders after an ankle tweak or when his helmet comes off at a crucial point of a game, he’s been there before. The same goes for Gordon.

Last year at this time a slew of young receivers like John Paul Richardson and the Green twins were thrown into the fire and it paid dividends down the stretch and continues to. The hope from OSU coaches is that these early reps yield similar returns.