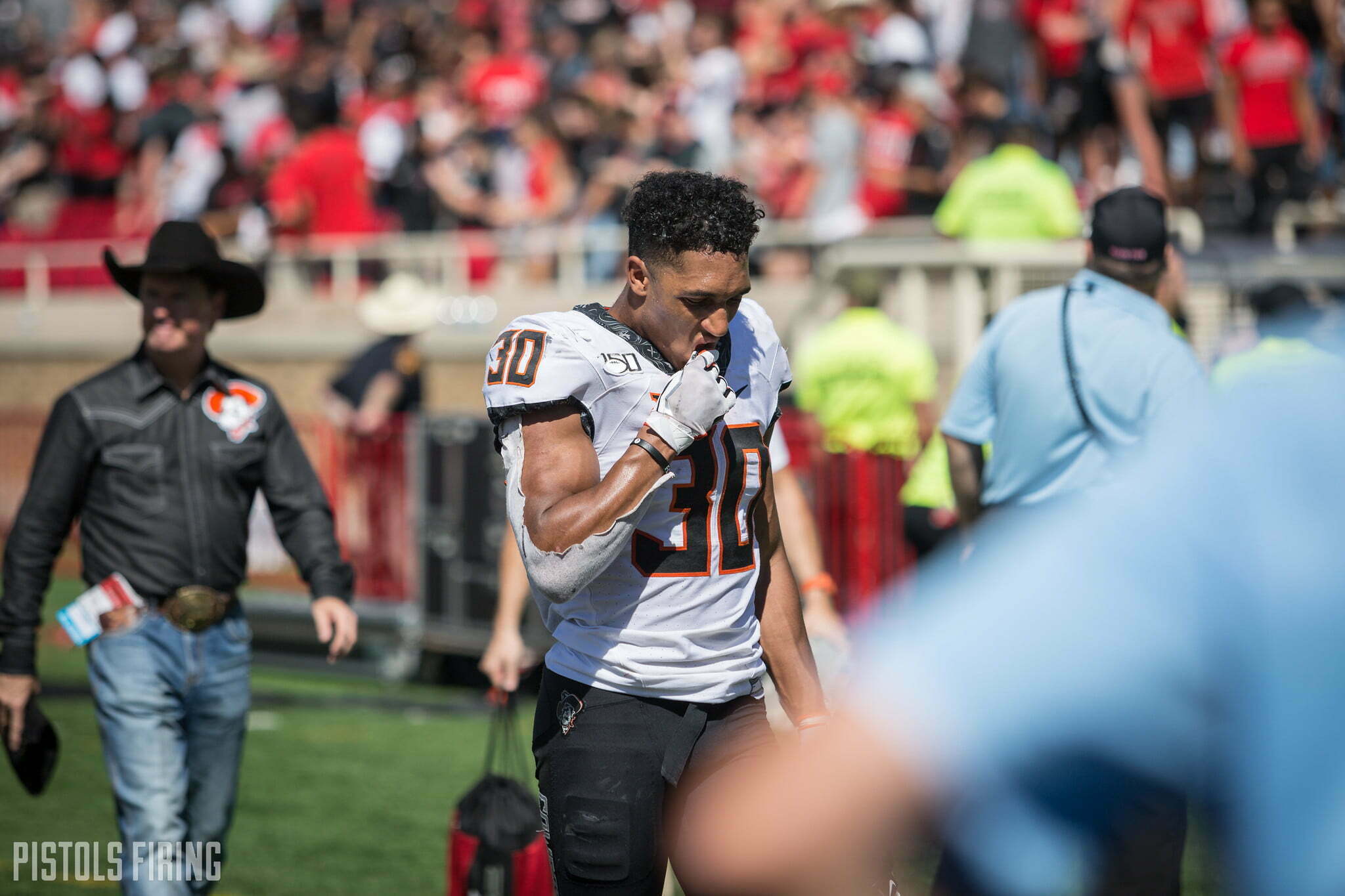 This should be a fun one.

Oklahoma State strolled into Lubbock, the new (and brief) owner of a top-25 ranking, and proceeded to fall (and fumble) flat on its face.

They say you can learn more from defeat than from victory so Mike Gundy and his staff should have plenty of whiteboard material to cover over the bye week.

So after a couple of days to reflect on the loss, let’s debrief.

It got ugly quickly with Spencer Sanders getting strip-sacked on the third play from scrimmage. OSU’s defense held strong, limiting the Red Raiders to a field goal despite starting at the Cowboys’ 26-yard line.

That paragraph is most of the first half in a nutshell.

Here’s a look at OSU’s drives for the first half.

Meanwhile, OSU’s defense held Tech to 0-for-7 on third downs, including three three-and-outs, got a stop on fourth down and held Tech to just 20 points on 10 first-half drives.

The Cowboys offense  jumped on Chuba’s back at the end of the second half (illustration below) and rode him to another big day. As the defense seemed to miss a step, or maybe just got worn down a bit, the offense found some life.

Sanders hung in there and turned in a decent second half, all things considered, finishing 15-of-22 with two touchdowns before capping the afternoon with a third interception. The Pokes were a play away from making it a one-possession game a few times late but the hole they dug in the first half proved too deep to climb out from.

Who gets a badge helmet sticker?

Last week for the helmet sticker, I said “who else but Chuba?” after the nation’s leading rusher chewed up nearly 300 yards of turf inside BPS. This week I really want to know… Is there anyone else that even qualifies?

As stated above, Chuba was the Cowboys’ offense in Lubbock.

Chuba remains college football’s top rusher and even pulled away in terms of rushing TDs with his three scores on Saturday. Through six games, his historic pace hasn’t slowed down.

I’ve ignored the Cowboys’ leading tackler long enough. Rodriguez led the way with seven total tackles (five solo) and a 1.5 tackles for loss. Through six games his 49 total tackles not only leads OSU, it’s third in the Big 12.

Question for the Bye Week

Where does your the arm land on the panic meter?

The easiest target for Cowboy fans’ thrown tomatoes is hung on the back of a No. 3 jersey. Spencer Sanders has to get better at his progressions, has to take care better care of the ball and has to be just… better.

After what we had thought was a one-off up-and-down performance from the freshman — when Sanders bounced back late against Tulsa after throwing a pick and losing a fumble — Mike Gundy warned us that this Tech game might come.

“Let’s say percentages are, at some point in his career, he’s gonna have a game like everybody else does,” Gundy said of Sanders. “Mason’s had his games where he threw three picks. We’ll see how he [Sanders] handles that part of it when that happens.”

So it came across all the more genuine when Gundy said after the game Saturday that Sanders needed to learn from those mistakes and that it was a normal part of a QB maturation.

Kyle Porter did a good job of laying it out, but these types of game are going to happen with young QBs. Whether or not he bounces back and how he continues to handle the adversity will make all the difference.

The comforting part for me was that neither Sanders nor the offense mailed it in when they fell down by 20 or more four times. They kept fighting back and almost looked like they could revive that Cardiac Cowboys moniker from a couple years ago.

Plays of the Game

Jordan McCray has been a pleasant surprise so far this season. The graduate transfer has only been targeted 11 times so far but he’s caught nine of them has shown to be a legit playmaker.

True freshman Trace Ford darted into the Red Raiders’ backfield for the only Cowboy sack of the day and his second on the year.