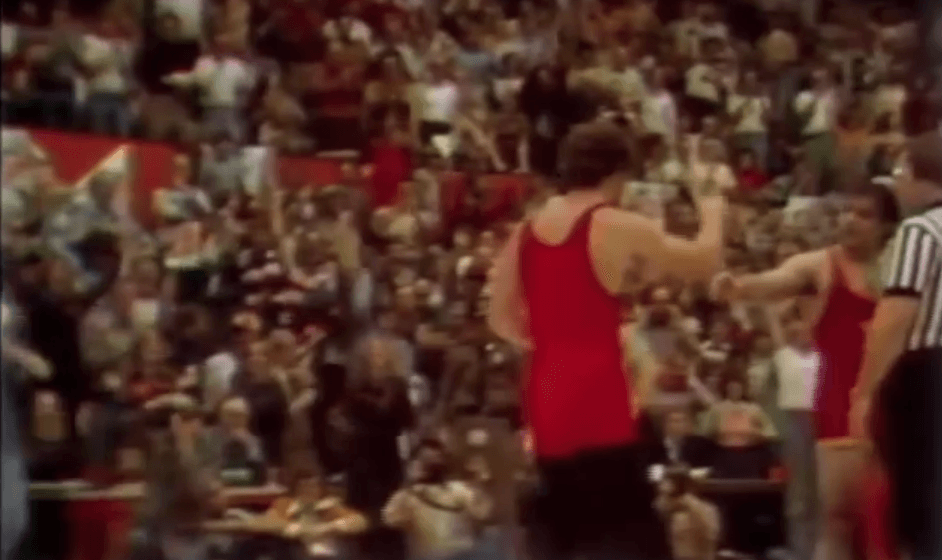 Daryl Monasmith takes down the lights at GIA. (Via YouTube)

I’d heard the story a million times from my dad, but it’s easy to forget with basketball and football at the forefront these days.

That’s why I was glad this week when the O’Colly re-kindled the great tale about Daryl Monasmith and the night GIA swayed like she’s never swayed before or since.

With the 1978 Big 8 (RIP) title on the line, Monasmith faced the indomitable Frank Santana of Iowa State.

You can guess how that went by the title of this post.

In all, six light fixtures were shattered, the tournament had to be stopped for a quarter of an hour and the radio covering the event lost its signal for several minutes.

“A couple of angle-iron pieces from the ceiling broke from the vibration,” said Monasmith. “The janitors estimate when they fixed the lights that if a couple more of those had broken the roof probably would’ve started falling in, too.

“I couldn’t hardly stand up. It was like your feet were bouncing up off the mat. It was vibrating that much. It was awesome because I’ve never had that experience before.”

I’ve been in GIA for some sweet moments, but I don’t think my feet have ever bounced off the floor because of the noise.

Jenni Carlson had a great piece about it in the Oklahoman last year, too, if you want to read further. Monasmith summed it up best in the O’Colly though.

“I was at the best university in the world. Above all, there’s the best-looking girls at Oklahoma State University.”