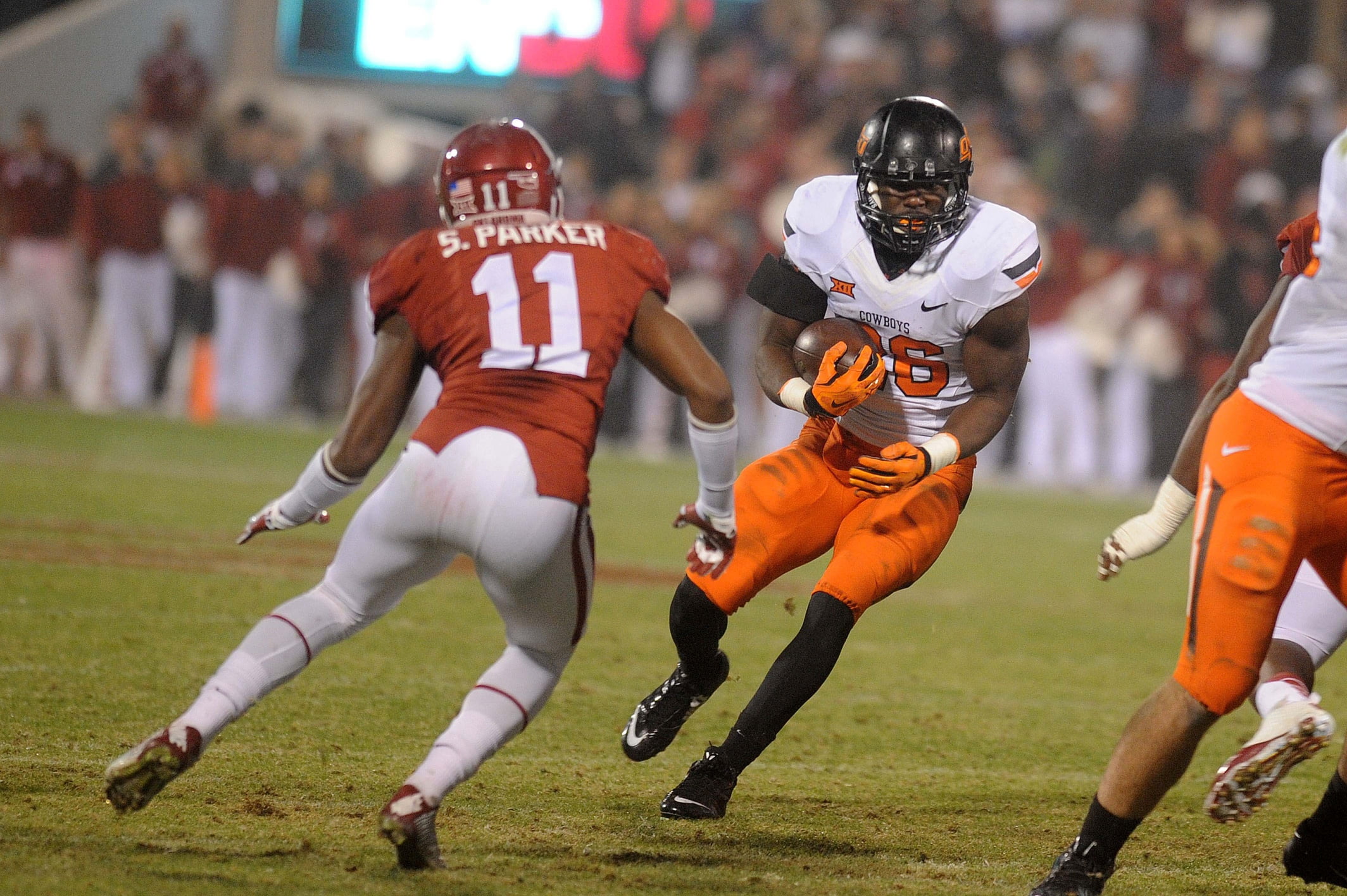 Early Monday morning I knew I had to exchange words with other human beings instead of continuing to write them over and over again to myself.

So I emailed OKC Dave, Carson Cunningham and Matt Amilian to get their thoughts on what transpired on Saturday in Norman. Enjoy.

Porter: How stunned are you guys that OSU actually ended up winning that game?

Cunningham: I never really considered the thought of OSU winning the game until overtime, even when the players were walking out for the coin toss I thought OU was winning. I was reminded of the 2012 overtime: OSU got the ball first – kicked a field goal. You know the rest.

During the coin flip, I foresaw Blake Bell throwing a touchdown to himself for the win. And then OSU won it and chose defense first.

Only then did I think OSU had a shot. Yet, I’m still stunned OU managed to lose that game. They were in complete control, sat on the lead and found a way to lose. It was a total Bedlam role reversal.

Dave: So you’re telling me OSU and OU played a football game where one coach made an indefensible decision that opened the door for the other team, then that other team quickly capitalized on the mistake and won the game? And the team that made the mistake was OU?

You asked how stunned I am. 100% I guess? To paraphrase Tyreek, it doesn’t seem real.

Amilian: I had a small amount of optimism at kickoff, but it was false sense of feeling like something good was going to happen. All OSU fans know what I’m talking about. I didn’t truly believe OSU was going to pull it off.

Perine had his way with us but that OU line was a huge reason. I figured they would continue to do the same to us with Keith Ford, but apparently (and thankfully) I was wrong.

Oh and this was me on the Tyreek punt return:

Dave: I was coaching my son’s basketball team. OSU was down 14 and OU was moving the ball when the basketball game started, so I chalked up the loss and focused on hoops.

A friend of mine showed me the score (tied, going to OT) when the basketball game ended, and my wife laughed at me as I sprinted out to the car and heard Hunziker and Holcombe call overtime. So this was us as drove home:

(We won the basketball game, too).

Porter: Oh I thought you were posting the GIF because of the basketball game.

22-year-old me would give you a hard time for missing the end of Bedlam for a youth basketball game. 29-year-old me knows better — plus 29-year-old me wonders if you might be a better option in Stillwater than Travis Ford. Might take less money, too.

Incidentally I missed 2001 Bedlam because I was at a high school playoff football game (watching, not playing).

I just re-watched the fourth quarter on Fox Southwest and it’s just as stunning. I realized OSU scored 21 points in the first 55 minutes and 17 in the last five (plus overtime). That’s staggering. We also never led in regulation (like 2012 but the opposite).

During the game I usually take a lot of notes and go back through them to make the 10 Thoughts and then follow-up “leftover notes” posts. As I was going back through I realized I’d written “talk about how crazy stuff usually happens in Bedlam and this year it didn’t.” 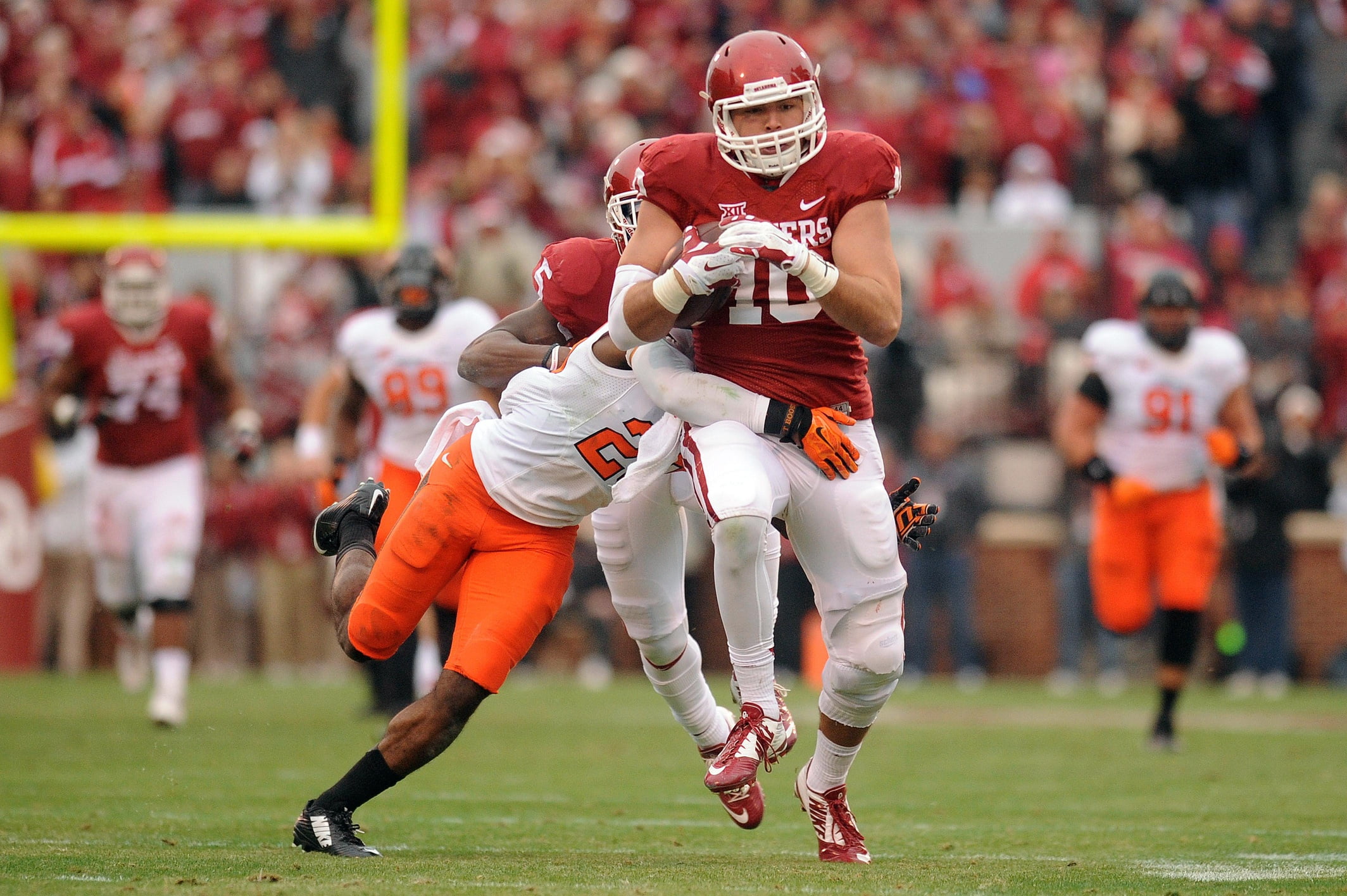 Blake Bell gets dragged down after a long gain. (USATSI)

I think that was at the beginning of the 4th..

Is the Tyreek punt return the most exciting OSU play in Bedlam history (in our admittedly short) memories?

Dave: Yeah, he said something about how Santa had stuffed our stockings with a Christmas miracle – something along those lines. One of those things that would be completely annoying for people who haven’t spent years listening to Hunziker. I remember thinking he was so corny when he came to OSU back in 2001 (can’t believe it has been this long). Now I know he’s corny but I love him.

Just got chills wondering how Teegins would’ve called it.

Question for the group: the winning field goal was basically an extra point, but how nervous were you as Grogan trotted out to kick it? (Carson is a soulless member of the press so this isn’t for him, I guess).

Amilian: Nobody could have come in and immediately won our hearts after Teegins, but Hunziker eventually won me over.

Which OSU fan didn’t picture Grogan missing that PAT? Everything in me told me he was missing it. It would have been the most Bedlam moment ever.

Cunningham: It’s true, working in the media does make you pretty much soulless.

When you’re a kid, the players are your heroes. When you work in the media, and get to interview them daily, you realize very quickly: These are just normal college kids adjusting to college life. They aren’t different from you or me. They just happen to be really good athletes. It seems silly in hindsight you were in awe of them as a kid. All the childlike sports innocence goes away immediately.

As for Hunziker, he teaches at OSU and I was in his class my senior year. He is genuinely the nicest, most genuine person I’ve ever met in the media (very rare traits in this business). Teegins is a legend and they couldn’t have picked a better replacement.[1. The octaves Dave hits in Bedlam wins give 1990s Mariah Carey a run for her money.]

Porter: One of my most memorable things about watching when I was a kid was being upset that the radio feed wouldn’t sync up with the video and I’d hear way before or after I saw what happened on my screen. DVRs FTW.

But yeah, most exciting OSU Bedlam play ever?

Dave: Here are the big plays I can remember from bedlam games in my lifetime:

I would say that Hill’s return is 1A and Rashaun’s catch is 1B. Both were pivotal moments in the game (obviously), but you could kind of feel Fields to Woods coming on because we had been driving. Tyreek’s punt return was completely out of nowhere.

Porter: I think that’s a great point. The momentum built to that 2001 TD. This was more like those commercials where folks take a $1 million check to the front door of random people and the people receiving the check are like “what in the wor….au80aur3qorhaslkdjlahfajsf!!! jaifjiewjrklajkreljk!!!” 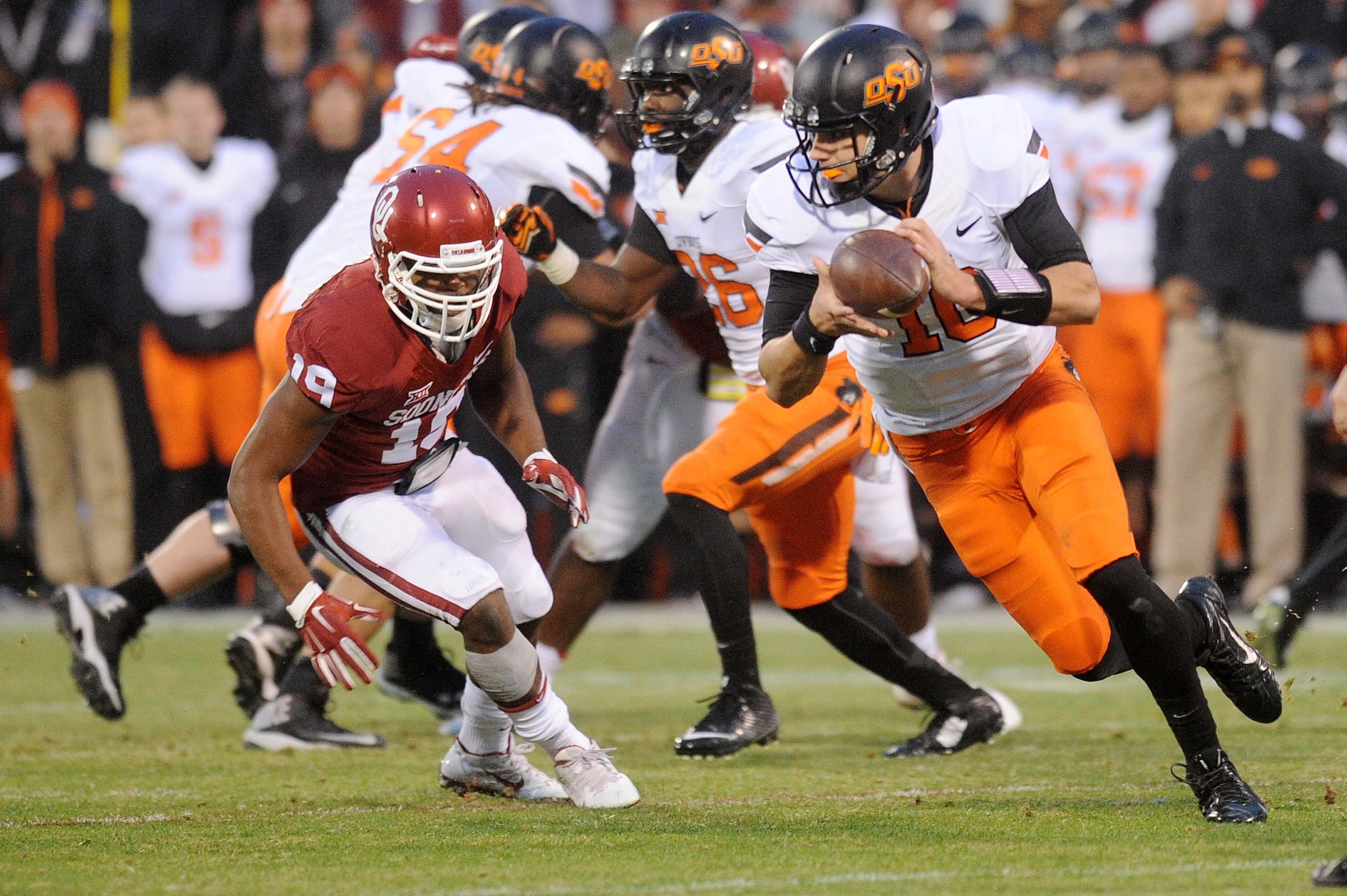 It definitely caught me off guard. I had succumbed to another year of the same ol’ Bedlam tyranny from BGB.

Cunningham: Jamie* Blatnick. We are officially entering the Old Man portion of the roundtable where we forget names. The Woods touchdown is still the most important play considering:

Hill’s play was the more exciting play, but the importance of 2001 puts it at No. 1.

Dave: Rivers was the intended receiver (I had to look it up). Excerpt from the Tulsa World:

“We wanted to give Marcellus the chance to make the big play,” said Simmons. “In hindsight, we probably could have gone somewhere else.” Rashaun Woods had 2 catches in that 2000 game.

The 2001 play was so big not only because of what it did to OU’s season, but also because it elevated the expectations for OSU going forward. I feel like Hill’s return coupled with Rudolph’s performance does the same for us in 2015.

Porter: It’s true. I wrote pre-Bedlam that a win could change how we feel about 2015 but I’m not sure I ever truly thought it actually would.

I like what Amilian said above. Grogan missing that FG would have been the Bedlam-iest thing in the history of Bedlam. It would have been the doinked PAT against A&M x100. Gundy might have literally punched John Hoover in the postgame press conference.

Guys, I think we have a star in Rudolph, by the way. He hasn’t been perfect, I know, and he threw what I thought would be two but turned out to only be one dagger pick in his two starts. But man, takes some big ones to walk into Gaylord Memorial and throw it all over the yard against OU in a win.

My favorite Rudolph moment was him trying to convince Gundy to let him throw it on third down in overtime. The look Gundy gave him said “my gosh, I should have started Cornelius in Waco.”

Amilian: I normally don’t want my QB making irrational decisions, but I loved that he wanted to throw it. He wants to beat OU by 6 rather than 3. He’s a competitor.

Do you know what former (and I guess current) Cowboy that reminds me of? Dez. Did you see the Dallas game last week? They were running the ball (as they should have) with a lead late in the game and Dez was dying to get a pass thrown to him. He wanted the dagger.

[Holds up a glass] …to many Mason daggers to come.

Cunningham: Something just dawned on me: Mason Rudolph wears Clint Chelf’s old No. 10. Chelf, who gave his team a lead until four seconds left in 2012 and engineered a potential game-winning drive with 1:46 left in 2013 Bedlam. Chelf waited for a fourth down stop that never came. I have to think Chelf was smiling somewhere when Grogan’s kick went through.[1. Probably under the neon palm trees at Murphy’s.]

Something else that dawned on me: Rudolph isn’t familiar with how Bedlam is supposed to go. He’s not from around here — he’s from South Carolina.

Plus, he didn’t lose a game his senior year so he has that indomitable freshman spirit:[1. Who didn’t think they were going to conquer the world their freshman year? I know I did.] “Duh, of course I can win this! Let me throw on third down in OT!”.

So…is he immune to Squinky?

He said in the post game, (I’m paraphrasing): “I’m not from this time zone. I’m not real familiar with the rivalry. But I know how important Bedlam is.”

That’s how far removed he was from all of the horrible chapters in OSU’s Bedlam history.

Now he just wrote a new one.

Amilian: I love the narrative of Rudolph writing a new script. OSU needs to pull off 2 of the 3 next Bedlam games to really say he’s done that.

OU fans will still point to the overall Bedlam record but that’s only because they lack creativity and will throw that out there anytime they feel cornered by trash talk.

I picture Mason walking into Boone’s mansion somewhere and Boone sitting there dangling a set of keys, the keys to the city of Stillwater insinuating he can have his own set if keeps beating OU.

Dave: The greatest trick Squinky ever pulled was to convince the world that Mason Rudolph was immune to his powers.

But seriously, whether you believe in Squinky or Sooner Magic or Gundy being afraid of OU, it does feel like the slate has been wiped clean. We all needed it, but nobody needed it more than Gundy. As Amilian said, now Rudolph gets an opportunity to write a new script.

Porter: Well done, Dave. That seems like a good place to end things.