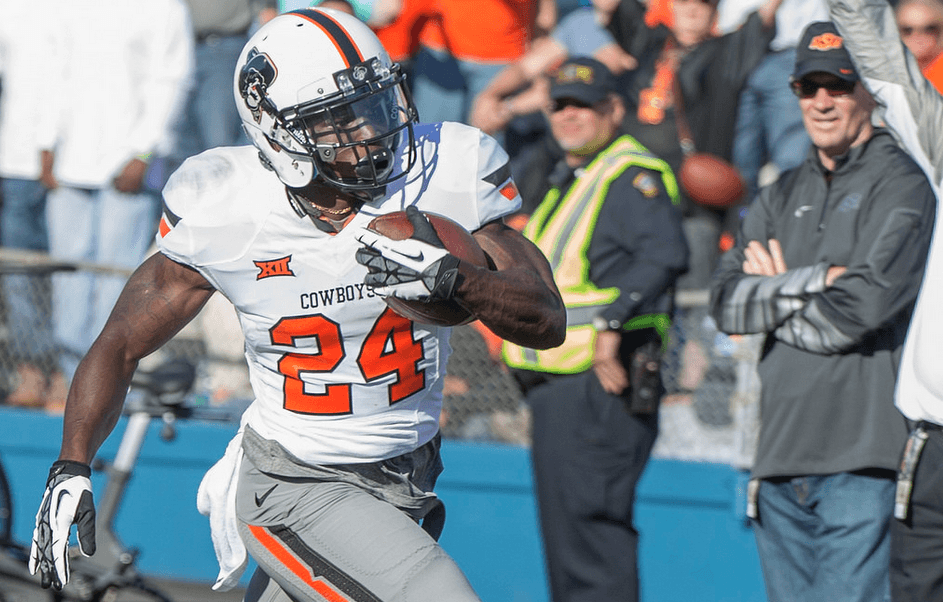 Welcome back to this week’s Uni Roundtable. We talk national picture (Oregon, thou art great) and which five pieces of the OSU uniform are our favorites.

Porter: First up, is it time to retire the white Pete helmets? Also, how superstitious are players about uniforms causing wins and/or losses?

Southwell: Probably; which is a shame because it’s one of the only Pete helmets I really like. But it’s a 1-1 record and two disappointing games. Carbon fiber is the same (?) and that helmet is apparently retired.

Superstition varies from player to player, but I don’t believe they think much about what they’re wearing once the ball is kicked off (aside from what jersey color the QB needs to throw to).

Players do get excited when they walk into the locker room and see the combo for the first time, but that excitement only lasts for a minute or two. It’s all focus on the game after that. They’re work clothes. I do think there is some truth to, “Look good, feel good, play good.”

But I guarantee you that no player is going to put on B-W-O and think, “Oh, man. We’re going to lose because this is what we wore when we lost that one game.”

Carson: I hate the superstition element with uniforms. Pre-2011, everyone thought W-O-O was cursed. No, it wasn’t cursed, they just wore them in the biggest games (Oklahoma and Nebraska) and lost because they weren’t as good of a football team. Zero uniform coincidences.

And don’t get me started on these beauties: 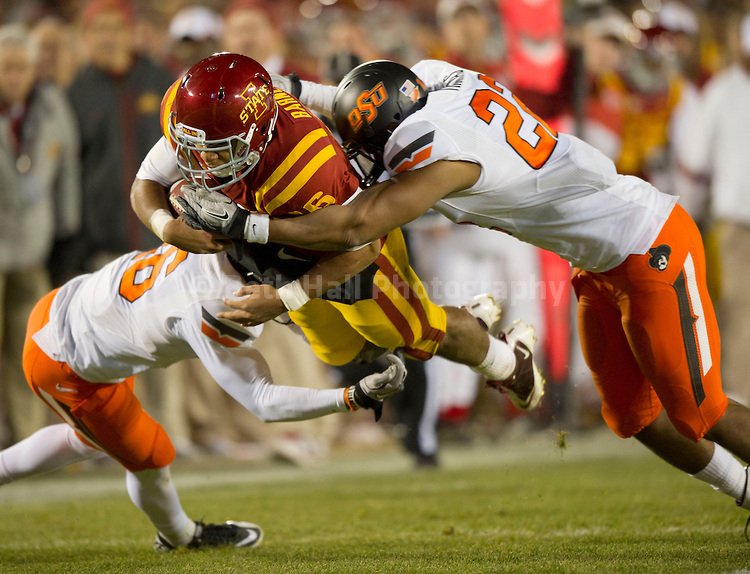 But there does seem to be a slight hint of superstition in some of their uniform choices: Undefeated all-blacks vs. FSU, B-O-B not against OU or Texas, gray pants in Lawrence, no tri-colors. It’s not an every week theme, just a tinge of superstition.

Porter: I love the W-W-G look, by the way. I had it ranked far too high in my 2013 rankings (the 2012 Arizona game when Calvin Barnett had more penalty yards than Wes Lunt had passing yards) and I dropped it a little this year but it’s really good. The gray pants just work. You can wear them with anything.

And don’t act like you guys didn’t notice that towel Roland added to his repertoire. Strong. 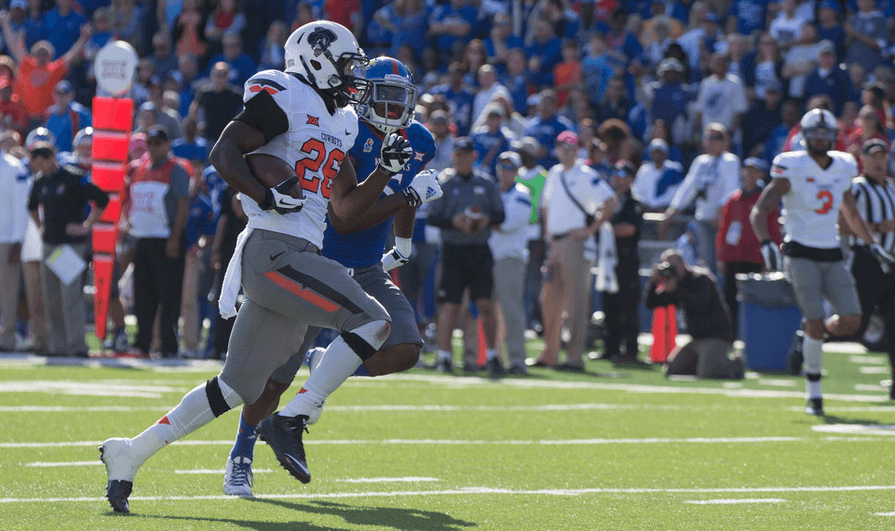 I was equally pleased to see the gray undershirt make another appearance for Tyreek. Never not a good look.

Speaking of things that work, did you guys see what Arkansas rolled out against Bama on Saturday? 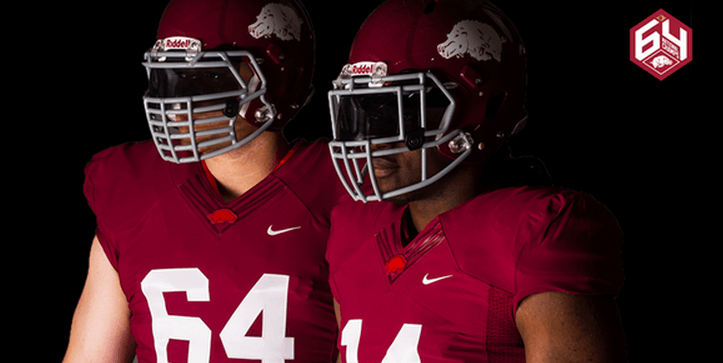 My favorite part was the slightly off-color pig on the neck (not a sentence I ever thought I’d write, by the way).

Lastly, I wish Justin could have seen the text I sent Carson when I first saw Oregon’s Saturday threads (I was catatonic). I mean, what am I supposed to do with this? 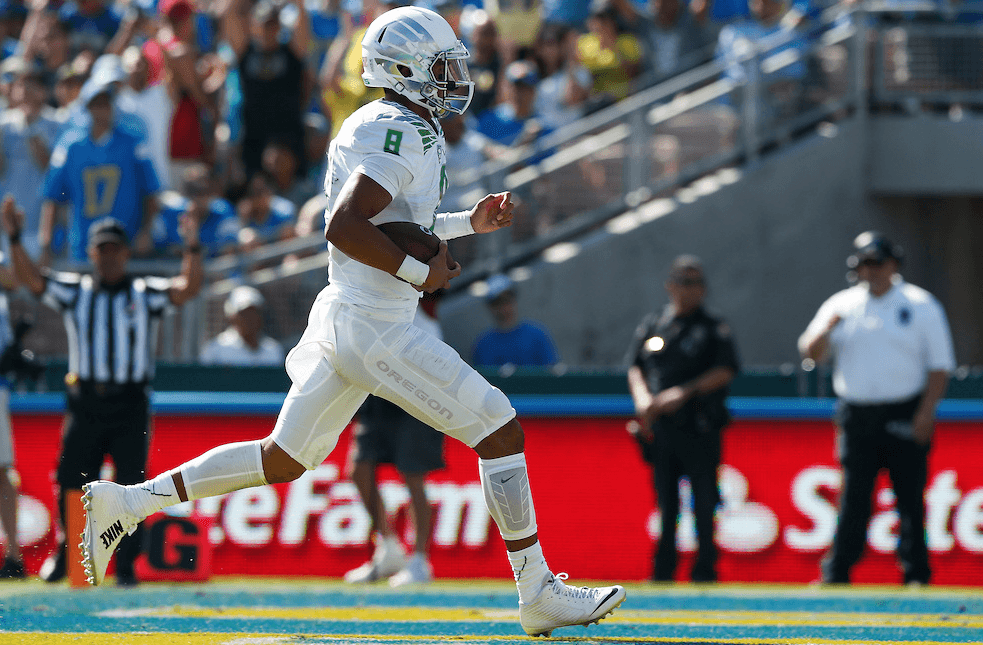 That makes what A&M did at Mississippi State look like it was designed by a 6th-grade art student!

I think you could make a legitimate case for Oregon and Oklahoma State having the two most well-stocked cupboards in the nation. We can chat about Baylor, too, but everything OSU has done so far this season has been Oregeon-esque which is (obviously) a good thing.

Also, Ole Miss is my darkhorse if we’re turning this into a bracket. They are spectacular.

Southwell: I agree with Carson with all that. Orange on orange has really grown on me (as long as it isn’t topped off with an orange helmet). A few years ago I wouldn’t have ranked W-O-O or B-O-O (appropriate for Halloween) very high, but I think they look really sharp.

You really can’t go wrong with gray pants with anything we have. One big thing I think people tend to forget is that the pants aren’t solid gray, and that the black and orange stripes complement the rest of the uniform. The white socks popped as well.

I liked Arkansas’ uniforms, but it kind of looked like they stole some old Bama jerseys and stuck a hog on the neck.

Oregon ice > A&M ice. Oregon might be on a mission to use 50 shades of green. Apple green is big this year, but I actually like their dark green better because it’s more intimidating with black.

Carson: As I texted Kyle: They will tell tales and sing songs of Oregon’s uniform prowess. The Ducks certainly know how to protect their throne.

I agree with both of you — I love the gray pants. More so than I remembered. If we had an OSU uniform power rankings, which items would make your top five? My list:

And the gray pants are trending upward.

As for Tyreek, I love the spats as an auxiliary: 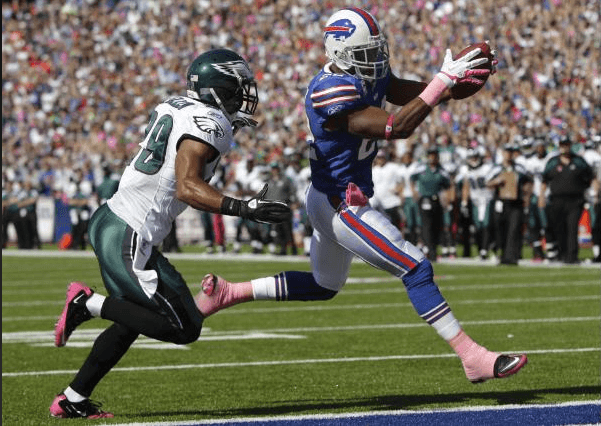 Josh Stewart had one, thanks to a lingering foot injury: 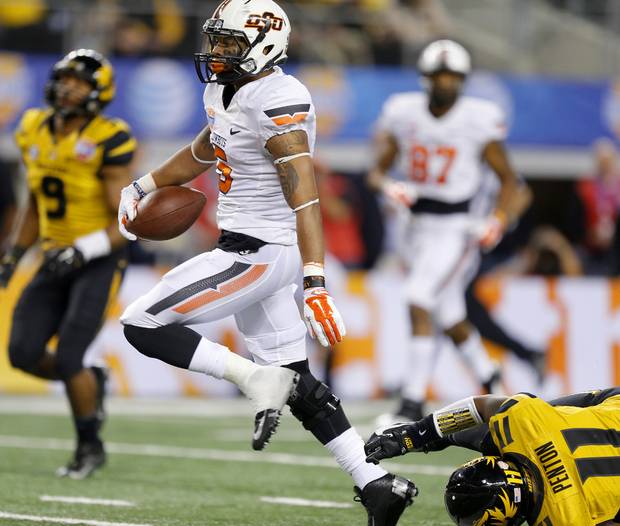 Had The Freek gone double spats, he would’ve won taken over the Uni Heisman this week. 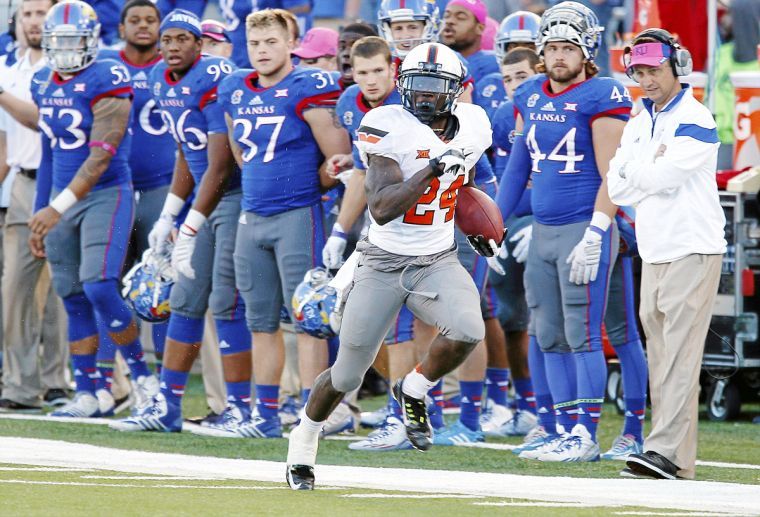 Southwell: What a question!

What cruel game is this where you limit me to five?!

It’s really hard to not go all helmets there, btw.