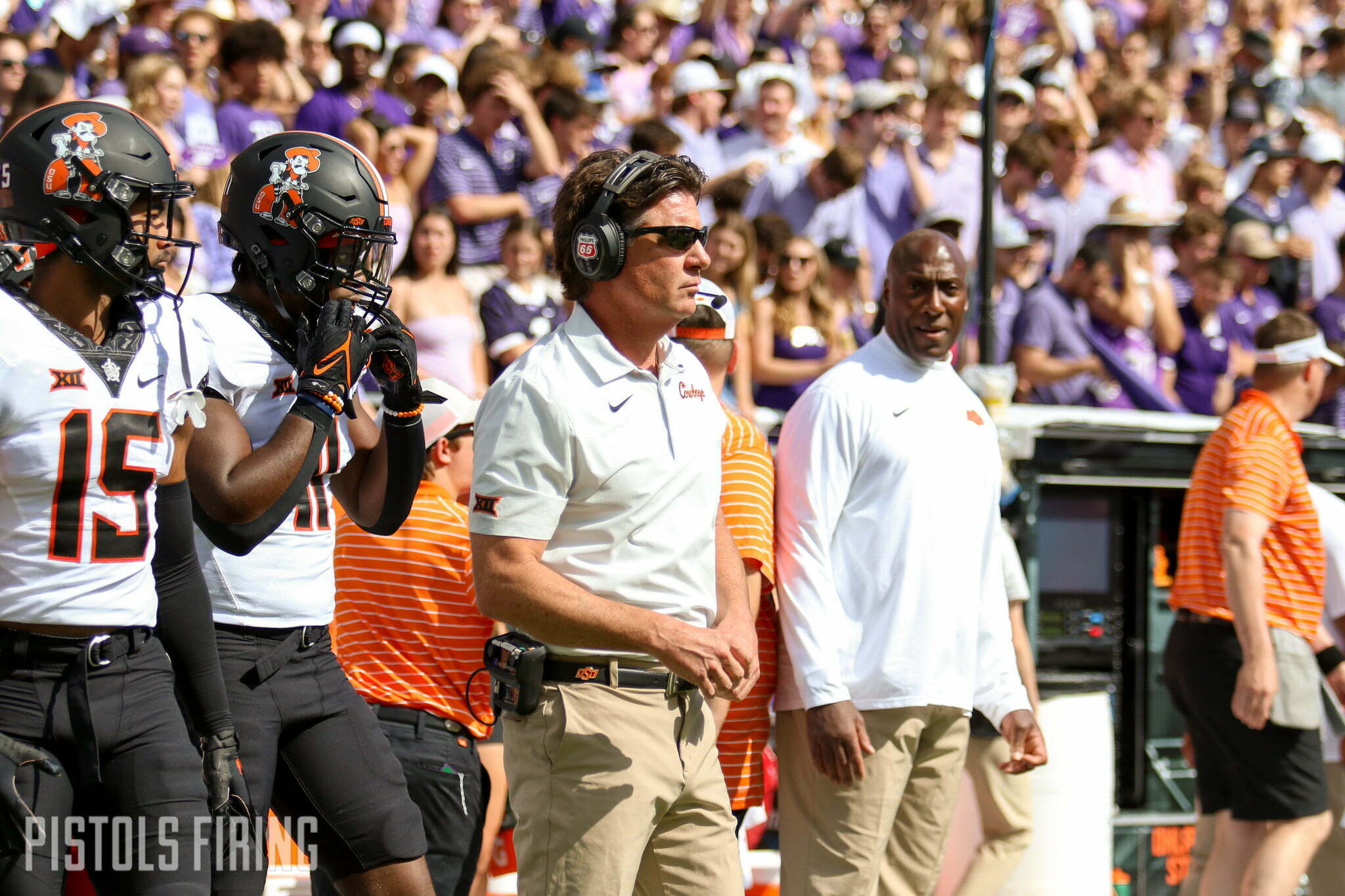 FORT WORTH, Texas — For the first time this season, Mike Gundy had to meet with reporters after a loss.

Oklahoma State fell to TCU 43-40 on Saturday in Amon G. Carter Stadium. Here is everything Gundy said after the game.

“Well, that one wasn’t as much fun as the first ones we’ve had, but that was a good game. Really good college football game. I think it’s pretty simple, this game came down to their ability to rush the football and we couldn’t run the football very well. So we became a little bit one-dimensional. And I mean, I really think that’s what the difference was. Penalty yards are about the same. They got a couple of returns on us, but we stopped them after they did. Turnovers evened out. We were better in third down than they were. Really, the biggest difference, in my opinion, is their ability to rush the ball. I think they averaged a little over five yards per carry. And I think we were at 3.7 (yards per carry) or 3.7 (yards per carry). That was really the difference. But, it was two good teams out there today playing. In the fourth quarter, I thought they did a better job scheme-wise in coaching than we did. And then they made some plays at the end to get them over the hump. I think I’ll be fairly accurate in saying that.”

On what TCU’s coaches did better

“I just said they made a few coaching — they made a few more plays there than we did. We couldn’t get much adjusted in the running game, and I thought they did a little bit. We did bust a coverage late in the game, but overall, you know defensively, we played pretty good. Offense kept putting them back out there in the third and fourth quarter, and then offensively we just didn’t rush the ball as effectively as we needed to.”

“We didn’t rush the ball. Not effective running the football.”

On why the run game struggled

“I would hate to say. There’s a lot going on in there. I would have to go back and look at it. It would be unfair for me to say right now.”

On how much Spencer Sanders practiced this week

“I don’t want to talk about any injuries directly related to players and how much they practice.”

On what he told the players after the game

“I tell them the truth. What I just told you. I think that the difference was they rushed the ball effectively and we didn’t. Their coaches made some good calls late in the game and they made some plays in the end, but I told them all week, ‘You’re playing a good team. They’re gonna make plays. You’re gonna make plays, you’re a good team.’ And so they made the plays at the end. And that’s the truth. And I mean, this league is gonna — I don’t know if anybody has a guaranteed win at all. I think it’s going to be week-to-week in preparation. And so I asked him to make sure that tomorrow when we come to work, that they’re in a good frame of mind, and I understand they’re frustrated. That’s good they’re frustrated, but I want him to be in a good frame of mind so we don’t waste tomorrow. Because you know, basically it’s about the journey from Sunday to Saturday. That’s what it’s about. Preparation and give yourself the best chance to play well.”

On whether he considered going for 2 in the first overtime

“Kind of, a little bit, but, you know, [a two-point conversion] is a low-percentage play. And, you know, I felt like that we need to kick it and give ourselves a chance, because the way the rules are set up, you’re getting ready to go for two anyway.”

“Well, we had a chance. We had the ball around the 50-yard line twice. One time with like, six minutes and 40 seconds or something, and then we had it again. And if we would have played decent and moved the ball a little bit, we had a chance to finish the game. We didn’t do it.”

On what the officials told him about the substitution rule

“I’m not sure right now. It’s kind of a train wreck. I’m not saying whose fault it is. I’m just not clear on what’s going on, to be honest with ya. We’ll have to try to figure it out and see what’s going on.

“It’s a combination of a lot of things. There needs to be some clarity on how it’s supposed to work now. It’s been different these last two weeks for us than it has been for a long time for me. And then we have to be better as coaches in the adjustment as we go on through the game.”

On OSU being conservative offensively in the second quarter

“The big picture is we didn’t rush the ball very well. When you’re averaging 3.5 yards per snap running the football, the other team at some point might think you’re one dimensional and then they can play a little bit.”

On what TCU did to run the ball so well

“Scheme-wise there’s nothing out of the ordinary. I think one of the major issues is trying to protect against [Quentin Johnston]. When you’re trying to protect against him, it’s hard to play the run a lot. He draws a lot of attention. I thought we did a good job defensively. He made some plays. We lost him there at the end of the game. We dropped coverage on him. Overall, our defense, our plan, the way we said ‘Make them run 10 or 12 plays to score,’ worked pretty good. Then we were able to make them kick field goals for a long time, which was good. They got a good offense. They’re gonna score some points. [Johnston] is a factor in trying to stop the run.”

“They always do when you lose. I don’t even remember the wins. I always remember the losses. We were trying to put it away. We just didn’t get it done. The challenge now is I’m gonna guess almost every game we play is gonna be like this.”

On what his range is

“That might max it out right there [the 52-yard field goal].”

On OSU converting the fourth down in the first overtime

“That’s a base play for us, and they dropped coverage.”