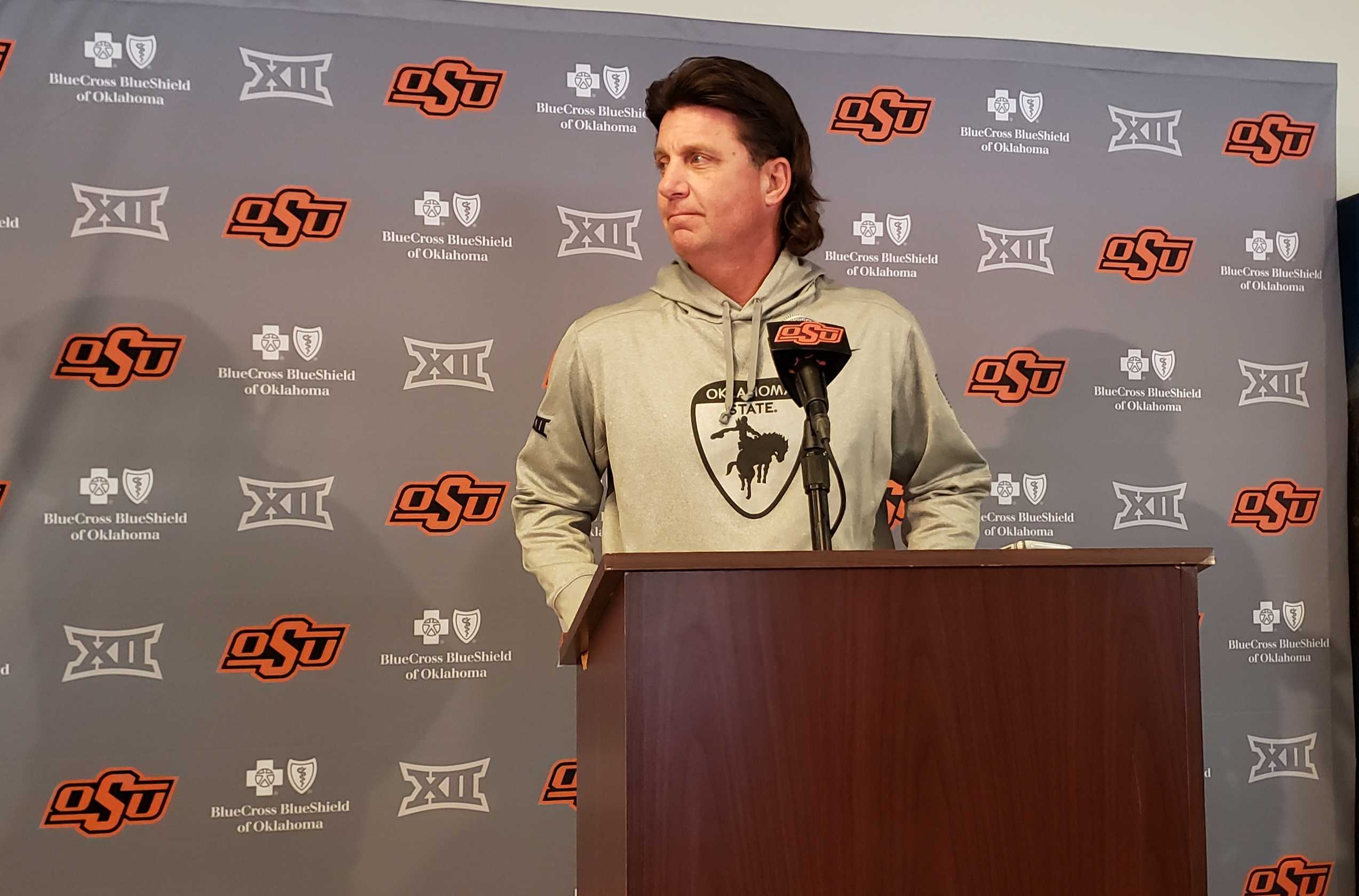 STILLWATER — Mike Gundy’s Cowboys are on a three-game winning streak for the first time since the first three games of the season.

Gundy met with reporters Monday for his weekly luncheon, where he talked about the upcoming West Virginia game, why Hubbard could get fewer carries if he returned to Stillwater next season and Mason Rudolph’s incident with Myles Garrett. Here is a breakdown of what Gundy said.

• His postgame analysis after the Kansas win was accurate.

• The Mountaineers’ defense has been good all year. The group doesn’t miss a lot of tackles.

• “Offensively, I guess they’ve found a quarterback they’re comfortable with (Jarret Doege). They made the change. Young man that transferred from, I think Bowling Green. [He] played well for them, was effective with the football, took care of the football, made enough plays to win. It was a good win for them.”

• On Chuba Hubbard’s carries being down the past few weeks: “It’s worked to our advantage. We’ve won, which has been good, and we want to protect him. He had 23 carries, and he had however many catches (two for 42 yards). So, he’s still right around that 25, which should be a maximum. Sometimes it might be more, but if we’re keeping him to 20 to 25, we’re fairly comfortable.”

• West Virginia hasn’t changed it’s offense much since moving from Austin Kendall to Jarret Doege. Gundy said WVU coach Neal Brown has done the same thing for years. Gundy said Brown does a good job using screens, and one of every 10 plays Brown will take a deep shot.

• On Dru Brown: “We were pleased with Dru. Dru’s been a great illustration of a culture here at Oklahoma State. He actually was a captain in that game because of all the hard work and effort he’s put in and the commitment he’s had to our program. We enjoy seeing him have success. He came out and played well.”

• Sanders has gotten better at not turning the ball over through drill work.

• On Sanders’ relationship with offensive coordinator Sean Gleeson: “I think they have a good relationship. Sean is a no-nonsense guy. He demands respect and accountability and a tremendous work ethic for the players at that position. I’ve learned that just in him being here for eight months or however long he’s been here, I guess longer than that, 10 months. Those guys will learn to adapt to him. I think that’s helped Spencer. It’s been good for him. It’s a position that demands a lot accountability, a lot of time, a lot of structure. I’m fairly certain that what I’ve seen in Sean that that’s the way it’s gonna be to play quarterback here at Oklahoma State.”

• Sanders’ pocket presence has been better, and he is taking care of the ball better in the pocket.

• On how the receivers have adjusted without Tylan Wallace: “They’re doing a great job. It’s obvious, Dillon is a guy that’s gonna get a lot of passes. We’ve had to make some adjustments scheme-wise. When you lose an explosive player who has given you about 135 or 140 yards a game, however many yards he was giving us, it’s not easy to overcome that. You have to make some changes. Other guys have to do things that they’re a little bit unaccustomed, and Dillon has done a great job.”

• On if Gundy expected Trace Ford to have such an impact this year: “Not as a freshman. He’s done well. He’s made the adjustments. So far he hasn’t hit the wall. Most true freshmen that play as much as he has in games will hit a wall at some point. They just get tired. Practice is hard, it’s more than they’ve ever had, lifting is difficult, the games are exhausting, the wear and tear of a season, school, all those things. He’s handled himself really well. He was in 40 plays last week. That’s about where he ought to be for his age and the youth. I didn’t anticipate him being this disruptive as a true freshman.”

• On Kolby Harvell-Peel: “I had caller this morning on my Big 12 call and talked about all-conference. I don’t think now with his numbers that’s any question. I think he may have even more than that with the numbers he’s got. It’s pretty phenomenal with the position he plays. We’re proud of him. He’s worked hard.”

• On what makes Hubbard a great running back apart from the long runs and speed: “Off the field, there’s two things: he’s humble and he’s unselfish. That gives him a chance to continue to work hard and not think that he’s arrived. Fortunately, I’ve been around a lot of really good players in my 30 years of football, and some guys that think they arrive and then they don’t continue to get better because your natural instincts don’t allow you to push and work hard.

“So off the field, he’s got that. He’s quiet and to himself. He’s humble. He’s unselfish. He’s powerful, and he’s highly intelligent. We can do a lot of different things with him. We don’t do a lot with him right now just based on we try to protect him a little bit. I know people are saying, ‘Well you let him carry the ball 30 times or 25,’ but we’re really trying to protect him. We should throw the ball more to him. I don’t know what his yards per catch is (7.45), but it’s pretty good. That’s a different way for a running back to approach the game. You’re looking this way getting the ball, you take hits (in the back), different things. So I’m a little concerned about that. That’s why we don’t throw the ball to him as much as we should.

“He’s very powerful. He’s highly intelligent. He has the ability to make a move five yards away from a guy, and he knows how that move ties in with his speed that that guy can’t tackle him. Everybody’s different runners. Barry Sanders will get right in your face and make a move, and you couldn’t touch him. Chuba makes his moves five, six yards away from a guy, and then that guy can’t catch him because he knows how fast he is. Those are the things that make him a special back.”

• On where Hubbard can improve: “He’s got a lot of improvement. At times as coaches we say that, and people say, ‘Ah, you’re just saying that because you don’t want him to go to the NFL.’ I don’t have anything to do with his decision and when he wants to go to the NFL. I just know that he has a long ways to go in preparing himself to make that jump and be successful at that level on some of the things we talked about.

“The big one is this: he’s only played in 13 college games. We all know that at the next level that is a man’s game, and the running backs take an enormous amount of hits. For a young man to make that step, he’s gotta really be ready. Regardless of what decision he and his family make, there’s a lot of things he can work on. One is maturity. A 23 year old is going to be a better addition to an NFL team than a 21 year old. That would be the most important part for his development in my opinion.”

• On Hubbard’s work ethic: “He puts a lot of time in. He developed himself in the strength and conditioning room with Coach (Rob) Glass in the first year when he was redshirtnig big time. He stays over there (after practice) catches balls, works on a few other things. I don’t know what he does down there. It’s just the way it is, guys that put there time in like that, they’re the ones that end up being successful.”

• On how beneficial it was for Hubbard to have had Justice Hill, and how beneficial it can be for OSU’s young backs to have Hubbard: “Everybody needs a mentor and somebody to lead the way. The other thing it did was it kept him healthy. When Justice went down, Chuba was the guy, so he started taking all those hits the last three and a half games of the year. If Justice wasn’t hanging around, and Chuba was getting hit last year three or four times for than he has now, his body wouldn’t be the same that it is now. There’s only so many hits in all of our bodies. That has helped him and helped keep him fresh.

“We’ve got a couple of guys that, LD (Brown) is starting to play better, and we’ve got a couple guys in the program that we’re excited about that if Chuba comes back next year, his carries will be reduced. People will go crazy and say, ‘Why is that?’ Well there is a certain aspect to us protecting them, as long as we’re productive and winning, to give them the best chance to play for a long time in the NFL if that’s what the young man decides to do.”

• On left tackle Dylan Galloway: “He’s a really unique young man. His nickname is Big Sleepy because he always looks like he’s asleep. It’s interesting, he plays better than you think he’s gonna play every game. I think he came back at Iowa State from his injury, and we were really concerned about him because he didn’t practice. He got in, and he played better that game than he did any game and he hadn’t even practiced.

“He’s a very talented young man. He has a lot of talent. He hasn’t even scratched the surface of how far he can go based on his talent level. He’s just starting to get accustomed to, ‘Hey, I need to work a little harder.’ There’s a reason that we call him Big Sleepy. The sky is the limit for him. He just always plays a little better than what people think he would.”

• On Myles Garrett hitting Mason Rudolph with his helmet: “I don’t know if I’ve ever seen anything like that ever in football. Very disappointing. I try to think back to think back to when I’ve even seen guys’ helmets get yanked off, and I remember two or three but they throw it down the field or something. There’s been enough said about it. I’m sure that the NFL will handle it the right way, but I have not seen anything like that ever in sports. It’s an unfortunate situation.”

• Gundy said he doesn’t know what he’s going to do with Gunnar Gundy’s state semifinal game being Friday night and Gundy having an 11 a.m. kick in Morgantown on Saturday. Gundy said he’s never stayed behind and watched a game in Gunnar’s four years of high school, but it’s a little different because he is a senior this year.