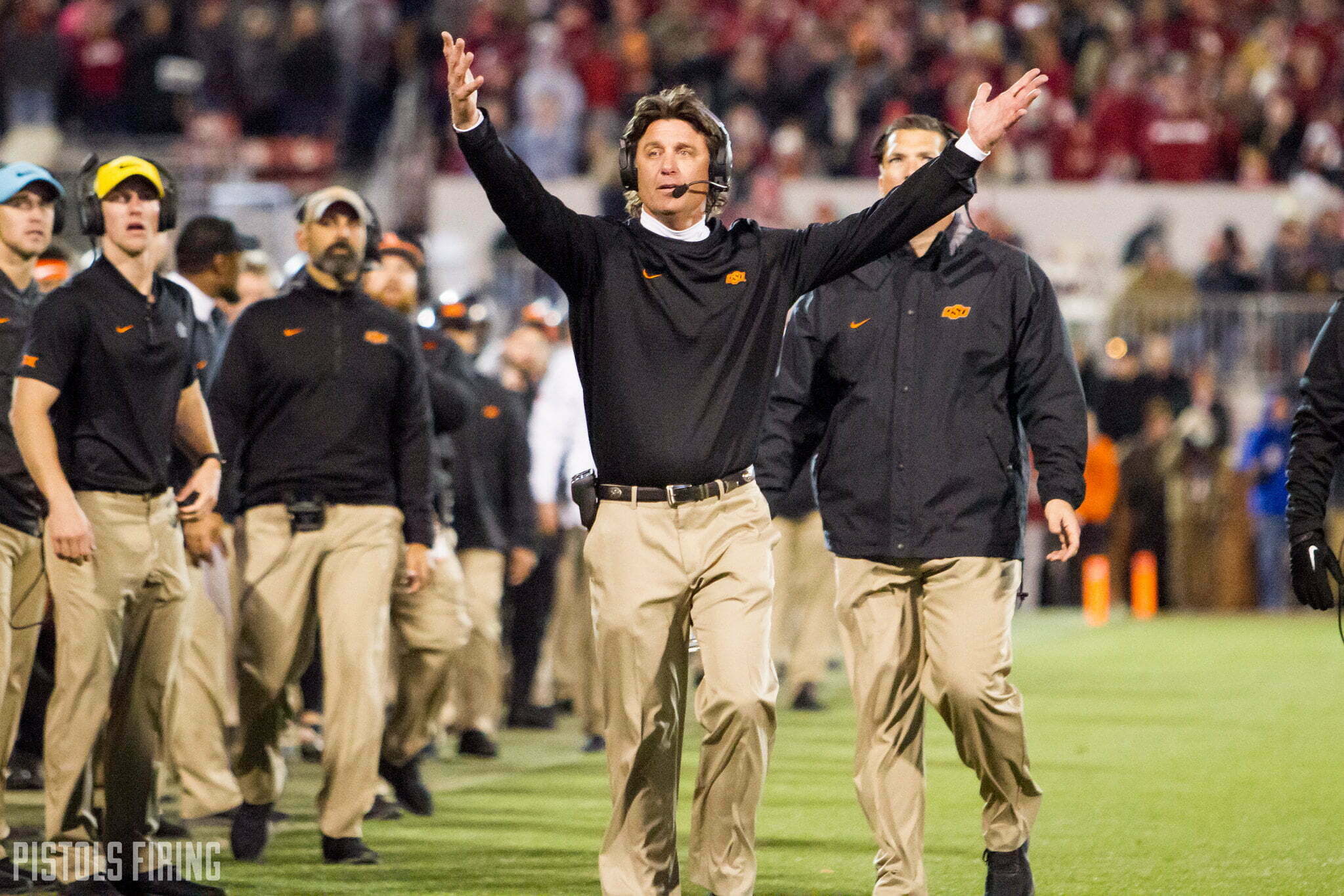 Bedlam did not go to expectations for the Cowboys.

Oklahoma thumped Oklahoma State 41-13 on Saturday in Norman taking the Big 12 title race out of the Pokes’ hands. After the game, Mike Gundy met with reporters via Zoom. Here is what he said.

“I wish we could’ve had the first quarter back. We put ourselves in a hole. We never really could come back. We’re not as explosive in certain areas as we have been in past years, so it was a little bit tougher. But, I will say that the players really competed and fought hard even though we had a tough start to the game. Had good plans coming out at halftime. We just didn’t get it executed.

“We lost to a better team today. They outcoached us, they out played us. You have to give them credit. Guys started to rally and come back a little bit. We just never could get anything established in the running game to really stabilize them so we could get a little bit of a flow on offense. Kinda got one-dimensional there when we got behind by too much.

“We came out and got behind by 21 points and basically gave ourselves a very slim chance of coming back. Then they responded, and we played well. You have to give credit to their coaches and their players, they hit us with some plays in the first quarter and got a big jump on us.”

“Well it seemed like he played good. There’s some times where he had a few mistakes, but overall, being thrown into the fire, he’s practiced a lot, he’s young, but he played pretty well.

“We didn’t protect as good as we needed to protect, so it’s difficult back there right now for us playing quarterback.”

“Well [Sanders] started feeling better. He got dinged in the head, so the medical staff usually makes those decisions on when those guys can come back and when they’re ready. In the second half, they said that they felt like he was OK and clear enough to go back in if we wanted him to.

“You gotta do what you gotta do. You play the hand you’ve been dealt. It’s not the most perfect situation, but we had guys that competed. As I said earlier, they played really good today, but at the end of the game we still had guys that were competing and playing hard. I was proud of them for that. You gotta play the hand you’ve been dealt. He got his head dinged, and medical people had him out. Put the young guy in, and he played a little bit. And we cleared [Sanders], and we put him back in. We just did what we could with what we had.”

“Without looking at the tape, it looked like they schemed us. They did a nice job with their schemes and got us in certain coverages and had plays that benefited them better, then they made runs afterward. Couple times we had dropped coverages, which we haven’t done that much this year. We’ll have to get that cleaned up. But, I would just give them credit, to be direct and answer your question, I’d give them credit for the schemes they had in the first quarter.”

“We missed a few open-field tackles, more than we’ve missed all year. They’ve got good skill out there. They’ve got speed and guys that can make some plays, and the quarterback is shifty. It was a little more difficult today than what it has been, yes.”

On the emotions showed during the game and general feistiness

“That’s just part of the game. With football, this is a very tough, violent, physical game, and there’s emotions. I wasn’t even around where it happened [when the teams were going into halftime]. Luckily, it didn’t get ugly. They kinda got everybody separated and got us on our own way. That’s just football sometimes.”

“I think it’s pretty clear-cut. Wish we’d have played better, but we didn’t have a very good start. Maybe we can play a little bit better next week.”