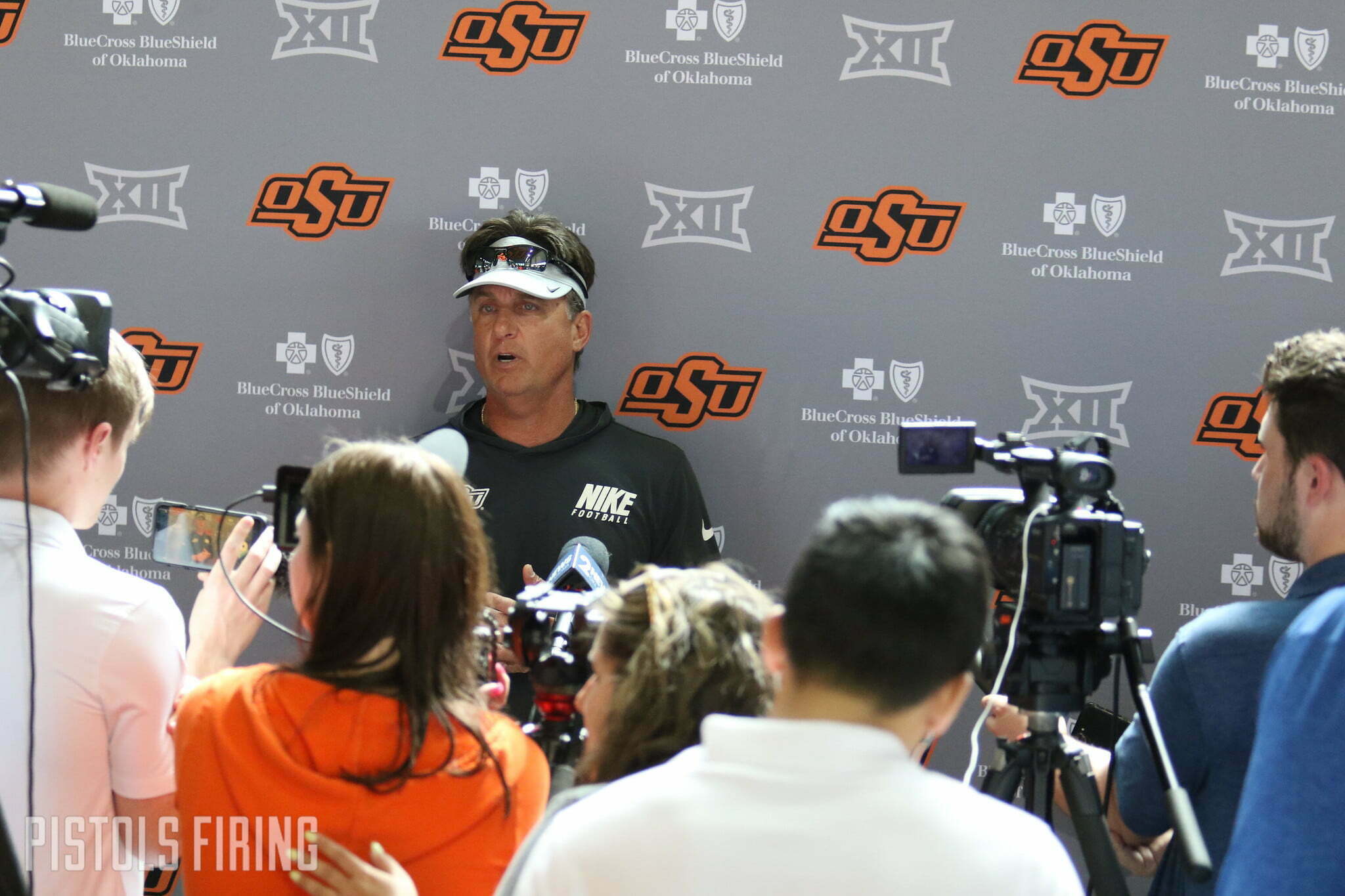 STILLWATER — Monday was the first day the Cowboys strapped up in full pads this spring.

A week into Oklahoma State’s spring camp, Mike Gundy met with reporters ahead of Monday’s practice to discuss how things are going with the team, his new contract and upcoming stadium renovations.

“So, we had a good first week. Obviously we weren’t in pads, will be in pads from here on out. So we’re excited about watching our guys progress and play a little bit more of a game that’s related to football than what we did last week. So we’ve got a lot accomplished, more installation last week, so now we can line up and play and compete, and trying to get the guys ready to play in the first game next year. So, we’re excited about where we’re at, looking forward to practicing now with pads from this point on.”

On balance between ‘thud’ tackling and full-go

“Well, we’re in thud. We don’t really practice full-go anymore. We don’t tackle to the ground. So many of those rules have changed over the last two to three years and it never really affected us. We haven’t tackled to the ground in years. So we’re a thud team. We play full speed, but we don’t go to the ground. And we think that it helps us in the big picture and try doing the best we can to simulate a game.”

“I like his enthusiasm. I mean, you can see him right now, and he’s very vocal and I think the players migrate toward him. They like him. I was hoping that his experience as a head coach, and as a long time coordinator would work in our advantage. I think that’s happening. Do I know for sure? No but it’s been three days. But I like his encouraging coaching style.”

On if any young players have stood out early

“Oh gosh. You know it’s so hard without pads. It’s just difficult without pads, because we tell them hands off for the most part. We’ll know a lot more two weeks from now, give them a chance this week to play a little bit, and then the next week we might start to see some guys progress that we feel like can help us in the first game next year.”

On managing limited number of offensive linemen and practicing in pads

“Well, we’re gonna practice. We’re gonna hold our breath and practice. I don’t believe in practicing half-speed or three-quarter speed. I just don’t think it relates directly to the game. It’s a risk, but the risk that I’m willing to take, because I think it’s important in the progression of our team.”

On Gabe Brown and other incoming high school players

“So the high school players that came in early are in good shape. With them being in good condition, that gives them a chance when we start to practice in pads. He’s at a position where it’s almost hard to say anything about his progression without being in pads.”

“Well, he seems to be doing fine. Again, the next couple of weeks for those young guys, how they develop when we start moving around full-speed and playing a little more real football, it’ll give us a better idea of where those guys are at.”

On the next step for the young receivers

“Well, we’ll benefit from it. It was scary last year, as you all know, but we’ll benefit from it because they had live reps. There is no substitute for live reps and experience, and that’s what they gained. So now they should play faster in practice and the game should should slow down for them some. Last year they’re just scrambling to get lined up and function.”

On the biggest difference in the wide receiver room

“Well, Jason’s experienced. He’s played a lot. So now he needs to grab it by the reins and give himself a chance to really perform at a high level and lead for the other guys in the secondary.”

On what the Cowboy Back position looks like this spring

“Well, you know, Cassidy’s back, [Blaine Green] is back. So we need to get some quality reps out of those guys that have some experience, and we need to stay healthy. That’s the starting point, and then we progress forward from that point. At some time in August we have to decide how much of 11-personnel team compared to a 10-personnel team we might end up being as the season goes.”

On his updated contract

“Well, that was months ago from President (Kayse) Shrum and Chad Weiberg. As I mentioned last week, they have taken care of everybody in our building, this is just the last one that you guys heard about. So, as I said a week ago, I’m very pleased with the way they’ve handled the situation and diagnosed it to a point that will last for years to come.”

“I don’t know a lot about [the updates]. I only know about what would be the cosmetic side of it. That’s more of Chad [Weiberg] and Kyle Waters. They’ve gone through all the developments, the changes to our facilities and the stadium. The cosmetic side of some of the outside exterior and the field that I’m involved in, we haven’t gotten to that point yet. But I know they’ve had a lot of meetings, and I know they’re doing a lot of different things. I just really don’t know what all it is.

“There’s some structure issues that they’re updating in there. We’re in an arms race for facilities, right? We have great facilities. They work really good, but it’s not enough because everybody else is building something new. So, we have to build new things. That’s the direction we’re going at this time.”

On if the seating capacity being lowered concerns him

“I think they made a great decision in keeping our capacity at 60 or 58 [thousand], whatever it is. I don’t know who looked into the future, but one of the issues that we may all have to deal with is live streaming, rights? It’s too easy to watch a game. You can watch a game on your phone. You can stay home. You can tailgate. You can put an 80-inch big screen in your tent. You get free food. You get free drinks. You don’t have to go in the stadium. Eventually, I think we’re all gonna have to combat fewer people going to games. If we can fill this place up, sell out these suites, financially, it’ll keep our athletic department very stable, and it looks good on Saturdays.”

“You try to keep up with everybody, but you’re gonna have limitations, just based on budgets and what direction an athletic department and ADs can go. I guess my best answer for this would be the teams that we recruit against mainly are in this area. You’d like to be ahead of them. Can somebody build something new somewhere else and be better than you? Sure. You can build a new facility here and in two years someone else will build one that’s better than yours anyway. I think there’s a happy medium in staying involved in the race and also not getting so far out of your league that you’re just running the money out of your athletic department like crazy.”

“He’s just got more experience. He feels more comfortable. It’s easier for him to practice and withstand the durability of practice and playing at a high level, which is very important because you have to practice at full-speed to be able to function.”

“Yeah, they’re doing well. They practice hard. We’ve been very fortunate. We don’t have issues. Our guys like to play. They practice well. Their team chemistry seems to be good at this point. We’ll know more in August. It’s too early, but they practice hard. Hopefully we can keep everybody healthy and get good, quality reps over the next four weeks.”

“Spencer had a really good year last year. He continues to do well in practice. His leadership grows every day and every year. We’re pleased that he’s here. We think it’s awesome that we’ve got him for a couple more years. He understands our system now. He’s had lots of reps, so he just needs to continue to grow and lead so the team will rally around him.”

On running back depth behind Dominic Richardson

“Well, the guys we have here. We got the two young freshmen [Ollie Gordon and CJ Brown]. [Jaden Nixon] is in here. We just have to see how it goes over the next two weeks. Without being in pads, that position is difficult to evaluate. We’ll just watch them through spring ball and make a decision. I don’t think there’s gonna be anybody in spring ball just jump up and take a spot from somebody else. We’ll see how they develop. If we make position changes, that should happen, that’d be in more of the middle of August.”