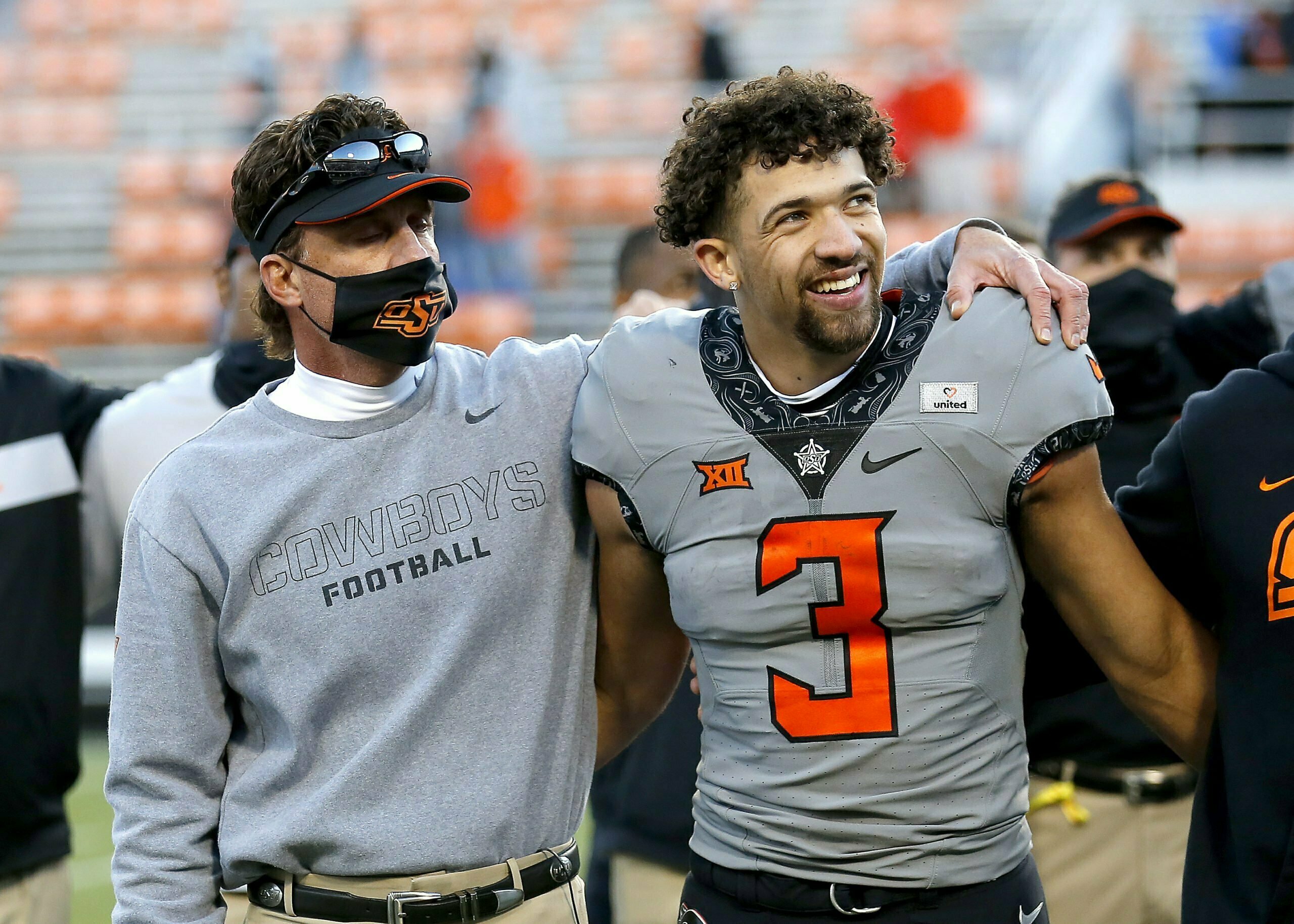 Mike Gundy got his starting quarterback back and continued his win streak.

“It was a big part of the game. He’s hard to corral. He’s really good. If you make a mistake, he’ll dip out and under like he did on the touchdown at the end of the game. It’s difficult to blitz him and pressure him because of his ability to make people miss and get out in the open.

“We knew we had to. They’re good up front this year, in our opinion, and a majority of the formations they’re using are tight end-heavy. So, it’s hard to get pressure on him. But our guys were relentless, and we were able to get enough on him at times to keep us in the game and to keep his feet from getting set in the pocket.”

On Malcolm Rodriguez’s blitz that forced an intentional grounding

“Jim [Knowles] made a good call there, and that was the one … one of them took them out of field goal. That was a huge play in the game. That play then No. 80 [Brennan Presley] catching the punt on the [4]-yard line were two of the biggest plays of the game that didn’t have anything to do with a touchdown.”

On the Cowboy Backs

“Those guys have been good for us for a number of years. We just felt like there was an opportunity with the style of defense that Iowa State plays. They have a unique style, and they’re good at what they do. We felt like that gave us some opportunities. There’s some voids, in our opinion, in that spot on the field where those guys are a lot in our alignments.”

“He was good. He made a mistake on the second interception. We made a play call, they countered it better than we made it, which happens. In my opinion, he should’ve just pulled the ball down and run. He tried to force it into a coverage that’s not set or built for that play.

“His first interception, he just underthrew the ball. We had a guy wide open, and he threw the ball about a foot too low. But his ability to run, he rushed for [71] yards, his ability to run and make plays kept us in the game at times, convert first downs. A couple times he got pushed out of the pocket, dropped the snap one time, picked it up and made a big play.

“We got some things out of him that he shows you, he gives you in practice. He might mistake something and get you in a bad play, but then he might turn around and make two or three really good ones. That’s what we had today from him.

“Shane [Illingworth] had practiced good all week and was ready to go, but there wasn’t any point that Spencer was in a position that we needed to sit him for any reason. His composure in this game was really good. I got on him a little bit at the end there because he wanted to throw the ball. We were in a four-minute offense and up by 10. He doesn’t quite understand throwing it when you’re up by 10 vs. a coach understanding not throwing it when you’re up by 10.

“But other than that, he did a really good job in this game with his composure.”

“Their style of play on defense, you have to be able to hit those lanes, throwing the football where we hit them, and your quarterback has to rush the football unless you’re gonna be a heavy-set, two-tight end team and just run it down their throat. That’s not who we are, so our matchup has to be a little different.”

“We got out of position on the long run. They ended up rushing for 227. They had the long one, the 65-yarder that pushed it up there. Minimizing big plays is such a big part of the game today. Scoring when you get inside the 10, touchdowns instead of field goals. Then minimizing big plays. We gave them that big one, but we forced a lot of punts today.

“They’re a good football team. They’re unusual a little bit with so much three-tight end style of offense that they run. If you’re not careful, you can get out of you gap, and that’s what happened to us a couple times. But overall, I thought that our plan was way better and it was executed way better than it was when Purdy was here as a freshman.

“In that game, I thought they got us. I thought that Jim and them rallied today, had a good plan and were able to keep us in the game and force some three-and-outs and even after we had turned the ball over not letting them score. Those were two huge series in this game.”

On the importance of having a quarterback with running ability

“Whatever your quarterback’s strength is, the best thing coaches can do is play to the strengths of their quarterback. That’s his strength. He throws the ball well when he’s rushing the ball well. Invert safeties like they play in the middle with, once they start becoming a factor in the run game, that allows him to be a much more effective passer. I thought he handled himself well rushing for [71] yards and then still being able to hit a few throws.

“He just made the one bad decision. If he wouldn’t have done that, overall, you’re talking about a big-time day. He’s gonna be 20-of-29 for-200 something. If he just had one pick on the naked. He made a poor decision on the other one, should’ve just ate the ball and ran it.

“But he hadn’t played in a while. It’s been, I don’t even know how long it’s been now, a month in a half maybe. I was pleased with him. I go back to what I said earlier, I was mostly pleased with his ability to keep his calmness and keep his head, and he was cool throughout the game. He didn’t get too competitive, which he does sometimes. I thought he had his composure throughout the game.”

“It takes one more guy out of it. When a quarterback has a chance to keep the ball, that’s one less guy who can flow front side with the running play. It just becomes a numbers game. I’m gonna guess that most people that play us are gonna be concerned with stopping our running backs, so somebody’s gotta stay backside now. That opens up your backside cuts.

“There was times that Chuba and LD, they had to make the joker, the robber in the middle of the field, miss two yards across the line of scrimmage. But we knew that going in. Our offensive coaches knew that there was gonna be times where you gotta make that guy miss. That’s the way it is. We have good running backs, and we told them, ‘You’re gonna have to make them miss sometimes.’ For the most part, they did a pretty good job of handling that guy in the middle of the field.”

On what has made OSU’s defense successful on third downs

“Yeah, I had the 3-of-13 circled right here, I was going to get into that next. They have been really effective on third downs. If you take away their first game, when they really weren’t themselves in my opinion, I don’t want to speak for Matt [Campbell], but if you take that game away, they’ve been a really effective team on offense.

“I didn’t know it was 51 weeks. I’m glad you didn’t tell me that before, that would’ve made me nervous. I didn’t realize that, but I guess that’s correct because he didn’t finish last year.

“He did a really nice job with his composure in this game. Spencer’s ultra, ultra competitive, and he wants everything to be right all the time. It’s not gonna be that way in football. It’s certainly not gonna be that way playing quarterback. We’ve discussed that with him, but that doesn’t always mean it’s gonna work out.

“He’s a much better player, like we all are, when we’re calm and we can think. I got the same problem. I do it on the headphones sometimes with coaches. I want to win. He wants to win. He did a much better job of staying composed.”

“Over the last three or four years, we hadn’t made those plays. I can’t remember that far back [15 or 16 years]. I have a hard time remembering what I ate for dinner. If our defense will stay humble and they’ll keep practicing hard, they’re really practicing good. Our football team is practicing good. I’m trying to get them to ignore the outside sources telling them how good they are.

“We haven’t made those plays. We haven’t laid out like that, full extension and knocked a ball down on third-and-12. If we don’t do it, he’s gonna catch it, and he’s gonna run up the field for another 20 yards.

“Then Peel coming across and going up and making the play and intercepting the ball, and not just knocking it away, he intercepts the football. They’re gaining some confidence. Confidence is a powerful thing to everything we do in life, particularly in sports. They’re gaining a little confidence. Every day they get a little more confident.”