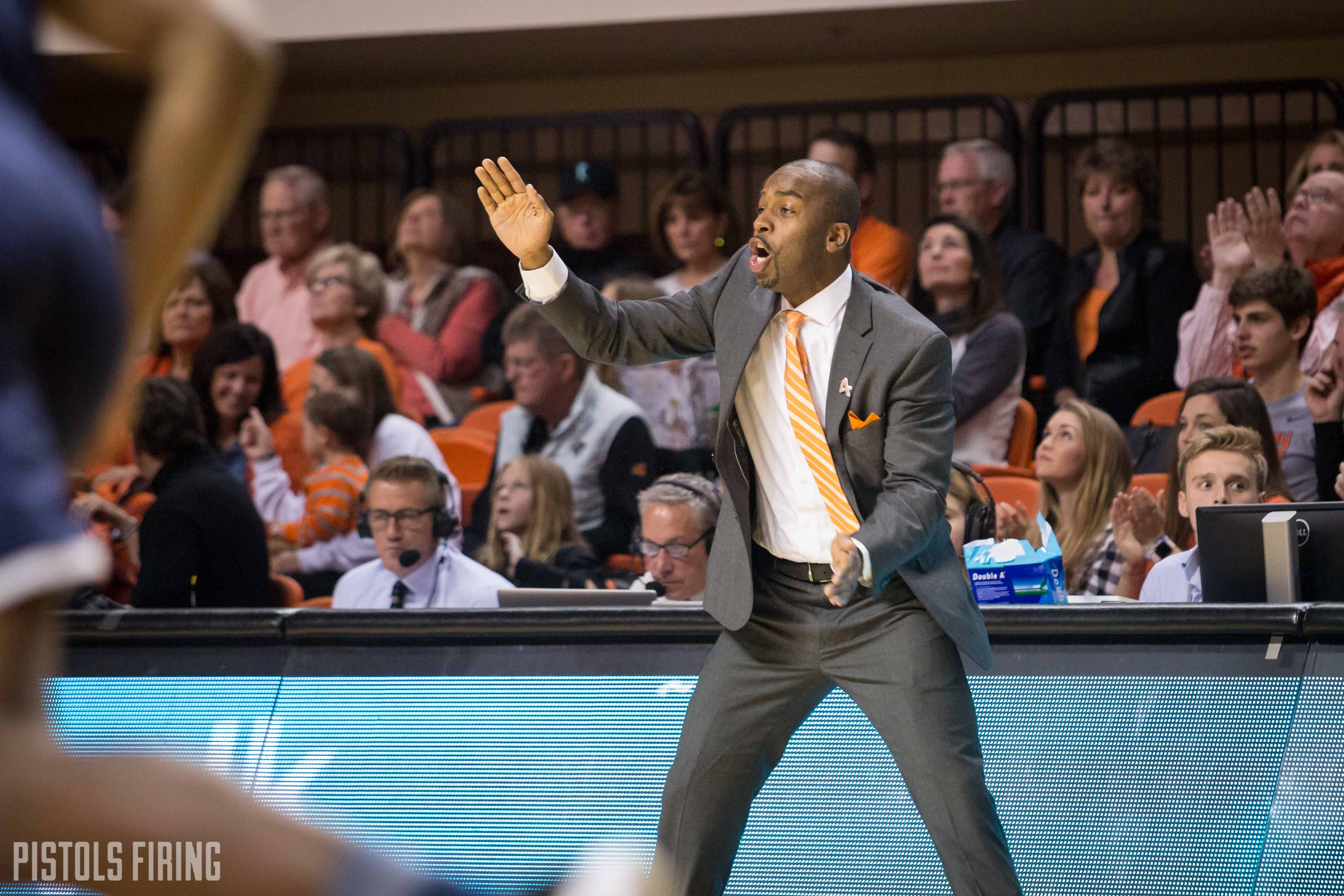 STILLWATER — The Cowboys have one more game before they’ll head to Brooklyn to square off with other high-major teams.

Oklahoma State hosts Western Michigan on Friday night in Gallagher-Iba Arena. It’s an NIT Season Tip-Off campus game before the Pokes go to Brooklyn and mix it up with the likes of Syracuse, Penn State and Ole Miss.

OSU coach Mike Boynton met with reporters Wednesday to preview the Cowboys’ clash with Western Michigan. It will be the first time a MAC school has played in GIA.

• On having depth: “I think last year was, I hope anyway, an anomaly. Obviously circumstances dictated that that’s the way we had to figure out a way to get through the season. Ideally, we want to be able to play with a lot of depth and allow our young guys, especially early on in the season, to try to find their way. We’ve been able to do that in several of the games so far. As that happens through these first couple months, they’ll be more prepared, or at least, feel more comfortable going into Big 12 play.”

• On if he is getting comfortable with a certain rotation: “I’d say no. I probably feel like I should be able to say yeah. The challenge is, Hidde (Roessink) goes down in Game 2, and not knowing exactly what the long term implications of that is. We think he’ll be available Friday. Not sure if he’ll play. But once you get him back, you got a whole different element. What he brings to our team is different from what we have right now.

“Obviously Marcus (Watson’s) situation is still up in the air, how that plays out. If you would have asked me three weeks ago, two weeks into the season do you feel more comfortable? I would’ve probably hoped I would’ve been able to say yeah, but I can’t really commit to that right now.”

• Boynton said he likes what the younger guys are doing. They’re approaching practice the right way and accepting that they aren’t the team’s “alphas,” yet. Boynton mentioned Chris Harris and Avery Anderson as guys who have stood out defensively. Keylan Boone is an “instant-offense” guy, and Kalib Boone provides depth if Yor Anei gets in foul trouble.

• On Harris: “Basketball is really important to him. The story of his family (dad a coach, aunt a former WNBA player), it’s been something he’s been accustomed to his whole life. Whether we win or not or whether he plays well or not, the process is gonna remain the same for him. He’s gonna believe that you come in and figure out a way to get better. You learn from some of the mistakes you made, you build on the positives and you get ready for the next one. Credit to his dad, his aunt who played at a high level and really his family for instilling that work ethic in him.”

“Obviously he hasn’t made shots yet, which is something that we believe he’s going to be able to do. Again, just finding himself in the offense, figuring out when he’s gonna have shot opportunities. But beyond that he’s been able to focus on learning our defensive system and buying into being a valuable commodity in terms of depth in the back court, a guy that we can trust on the floor late in the game. As you can see in the close games we’ve had at home, he’s been the one freshman that’s out there with the older guys. It’s a trust factor that he’s going to make simple plays, he’s gonna be under control, he’s not gonna do anything to try to be a hero. He’s going to play within himself.”

• Boynton said it’s an advantage for Harris that he played with Kentucky star freshman Tyrese Maxey in high school. Boynton said it has helped Harris be able to find his way as a supplementary piece.

• On Western Michigan: “They’re really good. They play really fast. They score a lot of points, and they do something that we’ve struggled at so far, which is they get to the free-throw line at a pretty high rate. We’ve fouled at a pretty high rate. We’ve gotta kinda find a better balance in order to keep the pace of the game where we want it, but we can’t do it if they’re shooting free throws every possession.”

• On foul trouble: “I don’t want to put that on our freshmen. I think some of it has been our older guys just kinda taking too many chances instead of being solid in our schemes. Yor picked up a foul the first possession of the game the other day. Those are fouls we just can’t afford right now. The freshmen take their cues from those guys. So I think it’s the older guys showing them the right way to start the games and have a better approach will help our young guys understand what it looks like when their opportunity comes.”

• OSU’s post offense isn’t where the Cowboys need it to be yet, but it’s something they work on every day.

• On Cam McGriff: “With Cam, it’s just a matter of making up his mind that no one’s gonna stop them from getting to the offensive glass. I think that’s where most of his offense needs to start. We gotta get him in some pick-and-pops because he is a good 3-point shooter. His percentage isn’t great to start the season. We have confidence in that ability, but it’s still has to start inside.

“He’s gotta be a guy who makes up his mind that he’s gonna be a force in the paint, he’s gonna score over bigger guys because of his quickness at 15 feet in. Then because of that, now guys have to come out and guard him, and he can either go by them or if they don’t come out, he can, as a secondary option, rely on his 3-point shot.”

• On staying fresh with the depth: “I can’t really tell right now, I think it’s really more the byproduct of the whole season that you’ll see that. Late in the year last year, we were playing a lot of close games that we just couldn’t quite get over the hump the last five or six minutes. I remember the OU game here, we were up 20 in the first half, and we just literally couldn’t score for like six minutes to end the game because we couldn’t get clean looks. The game at (Texas) Tech, we get to overtime, we couldn’t quite make plays. The Kansas game here.

“Those things stick in my mind as games that right there at the end, the last three or four minutes, we just didn’t look like we had enough gas in the tank to finish. Hopefully now as we get to that point in the season this year, our depth will have helped us preserve some of that energy, and we’ll be able to make those plays late in games in the Big 12 season.”

• On the importance of taking a step forward with this Western Michigan game before going to Brooklyn: “It’s important for us that we get better. No matter what the day is. We have to have a great practice today. We found a way to win on Sunday with a not-so-great shooting night. I still don’t also feel like we necessarily approached the game the right way or prepared as well as we’re capable of. So I’m looking forward to seeing us approach this game a little bit better, have a better, more mature mentality.

“Whatever happens in the outcome of the game happens. As long as we play the game the right way, as long as I feel like we prepare for the next two days to get ready for a really good team, then I’ll feel good about the results.”

• On missing free throws: “It’s frustrating when it’s Lindy (Waters), right? That steps up there and misses them. You expect maybe a freshman to get up there in the moment and doesn’t feel as confident, looks around and people are counting on it to go in. But for him, for Yor, who’s been in that situation multiple times for us, for Ice (Isaac Likekele), who’s been a couple of times, that’s where we gotta be tougher, more mature.

• On how to tone down Anei’s aggressiveness that leads to foul trouble with him still being effective: “He’s still not all the way as mature. He’s started a lot of games, but it also takes time for big guys to kind of figure out the early officiating. And not to make an excuse for him, sometimes a game is officiated different from game to game. Sometimes they let them play pretty physically in there.

“What he’s gotta do is not take chances unnecessarily. He doesn’t need to go over a guy’s back when he’s clearly in front for an offensive rebound. Let it go, let’s get back. He doesn’t need to leave his feet on a guy who’s four inches shorter than him to block a shot, just stay in good position. Some of it’s on him. Some of it, I can see it is adjusting to how the game is officiated. Nonetheless, he’s gotta be better, he’s gotta play better more consistently. Not only for him, he’s gotta set a good example for Kalib Boone, for Hidde when they play in those positions to know what it looks like.”