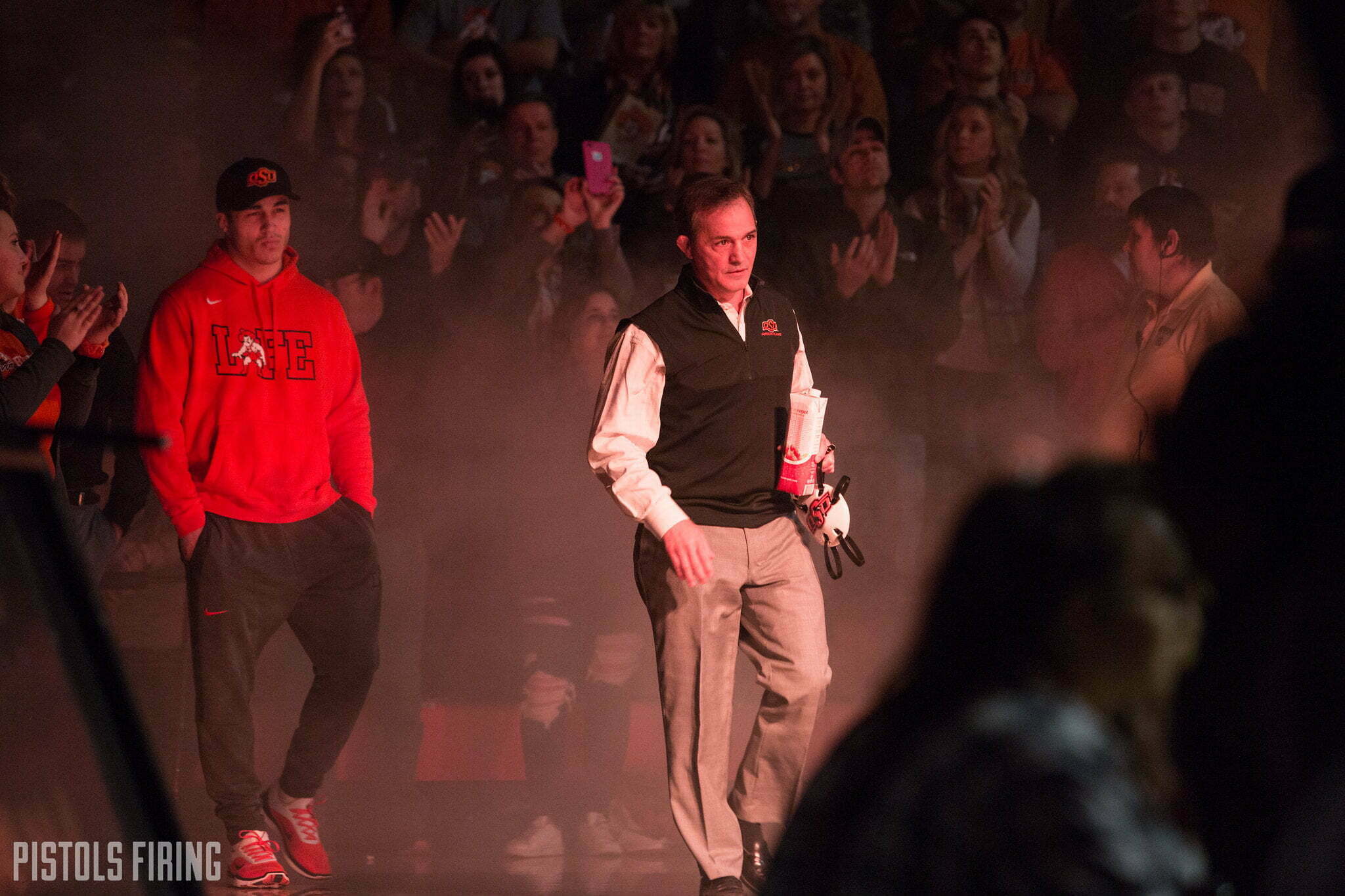 STILLWATER — John Smith met with the media for the first time this season Thursday, and he had a lot to go over.

Smith, Oklahoma State’s wrestling coach, fielded many questions about his projected lineup, Daton Fix and more. Here is a breakdown of what Smith said.

• “The schedule got a lot tougher for us. The month of August was a really tough month for us because we lost a few people. Kaid Brock hurting his knee, (Andrew) Marsden, who’s not in school right now recovering from a health issue, hopefully we’ll get him back, missed out on a heavyweight, and of course, Daton Fix. We visited with Daton and decided for him to take an Olympic redshirt. In about a one-week period, it seemed like it kinda went south on us leading into the season, but we’re gonna be OK. We just need to really focus on dual meets and how we’re gonna win dual meets. I think we’re gonna be a lot tougher tournament team, which is a good thing. But we also take a lot of pride in our dual meets.”

• There are three weights OSU is “pretty uncertain at,” in 133, 197 and heavyweight. “At this point, we just need to really focus on trying to develop somebody to be competitive at those weights.”

• On Fix: “You look at where he’s at at this time, you never know if it’s the right decision. And that decision can be changed sometime in the season. I doubt it will be, but I think in August when we made that decision, it was probably the right one at that time. Things could change, but being an Olympian when you have that opportunity, you want to take advantage of it. And you want to put yourself in the best scenario to make the team. Forget about a medal. You can’t win a medal unless you make the team. In August, I think that’s what we were thinking as we made that decision.”

• On the importance of having a potential Olympian on the team: “It’s an important part of our program. All you gotta do is look around and see that that’s what a lot of recruits coming out and high-level recruits have a focus on is they want to continue on and wrestle in the world and Olympic championships.

“… We darn sure want to give him that opportunity and put him in the best scenario. That scenario could change, but it’s only a change if we think something’s better for him to make that Olympic team.”

• Fix “really didn’t wrestle that bad” at the World Championships. Smith said he wrestled to his competition.

• The hope was that Kaid Brock would wrestle at 133 with Fix redshirting before Brock tore his ACL.

• Smith said he thinks Brock will be back, but that’s unlikely in the fall semester. Smith also mentioned freshman Reece Witcraft and redshirt freshman Conner Wilson as guys who could compete for the vacant spot at 133.

• “It’s kind of a scenario where, who do you put in if Brock does come back and if Brock’s healthy and is able to finish? Of course if Daton comes back, which is not likely, you’d hate to be pulling a freshman out. It’s kind of a tough decision at what we’re gonna do at that particular weight class.”

• Austin Harris and Cornelius Putnam are competing for the spot at heavyweight. “I’m kind of high on Harris and Putnam, our heavyweights. I know that the lineup that they have in some of these dual meets is tough, but they bring a lot to the room. They train well. They train hard, and that gets you excited to have guys in the room training hard.”

• “Whoever we go with at 197, it’s going to be someone who can wrestle hard, who’s going to take a lot of pride. We’re not just throwing a body in there right now. We’re gonna put someone in there, maybe a small guy. He may be a weight below and maybe even smaller than that.”

• On Boo Lewallen returning from injury: “I’m not gonna jinx the guy. I think I jinxed him the last two years. So I’m just going to say, ya know, he had a new surgery. I think the last couple years I said he’s healthy, and I jinxed it. So, I’ll tell you he’s barely hanging on, and he’s not very healthy.” That was a joke.

• Smith said Lewallen should get a medical redshirt for last season.

• Lewallen is the projected starter at 149.

• On Wyatt Sheets and Andrew Shomers at 157: “Shomers really struggled a little bit last year, maybe the change of schools. I think he struggled more on his weight. There’s a point in time where he just felt like it wasn’t best to continue to do, which is fine. I see a level of rejuvenation with him as far as wrestling 157, making the weight properly, making it right. So, I think both of them will give us a good look this year and give us a chance. This is a weight class we gotta count on when you’re down three weight classes as you’re going into the season and you’re really looking at seven as of now. I’m not saying that anyone can’t produce at those three weights, but as it looks it may not happen, likelihood it won’t.

• “The recruiting class that we sign this year, I wish we had this year. That’d be real nice.”

• OSU has to “really focus on health this year.”