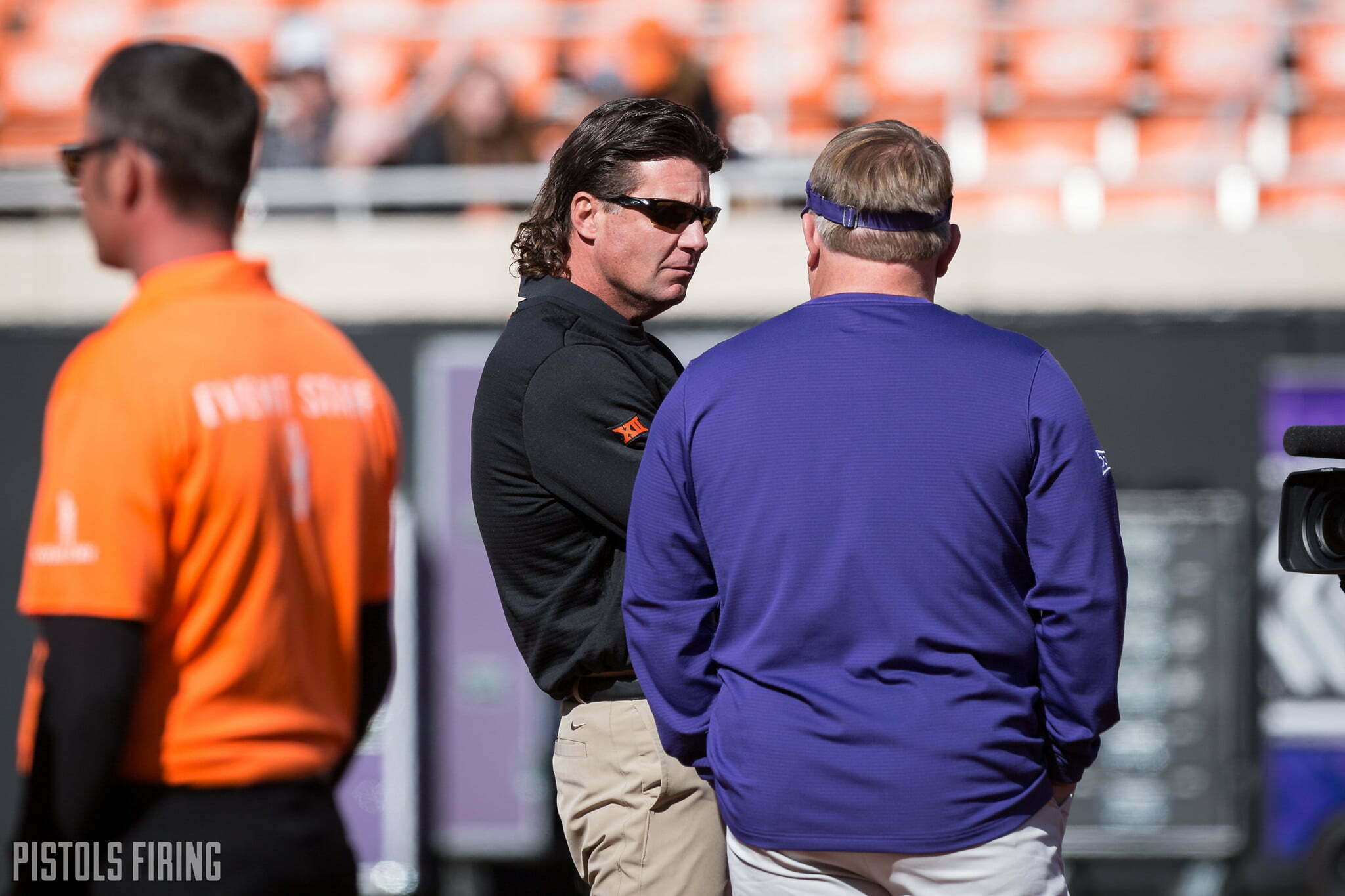 For the third time this season, Mike Gundy had to face to music after a Big 12 loss.

Oklahoma State fell to TCU 29-22 on Saturday in Fort Worth. After the game, Gundy met with reporters over Zoom. Here is what he had to say.

“Well, it’s pretty rare game when you score on defense and and get that many turnovers to not be able to find a way to win, but we just couldn’t muster up much offensively. We couldn’t get much stability. We did hit on a couple big plays, but we just couldn’t muster up enough with where we’re at right now that to keep going. So, I did tell the team this that their effort was unbelievable. For them to continue to go out and fight, and defensively when they had their back against the wall and strip the ball away from them a couple times, I mean that’s really, really hard to do, particularly when the offense knows that you’re trying to do it. I told the players that we asked him to compete and they competed man I was fired up about their effort. And we’ve got to do a better job of trying to find a way to stop the other team from getting big plays.

“We’re playing really good defense, but we’ve given up two or three big plays each game which is allowing them to score points on it. We’ve got to work hard and try to minimize big plays and then you know we just kind of have to take what we have offensively and try to work it and find a way to move the ball and score a few more points consistently.”

“From the sideline, it looked like his effort was unbelievable. I see he had 12 tackles. He’s been tremendous for us this year and what he’s accomplished his effort, his leadership’s been awesome. And you’re right on. He worked his butt off and competed throughout the game.”

“It looked like he played pretty good. I thought he got downhill. I thought he made some cuts. I know he competed. I felt good about him. I haven’t even looked. Yeah, he had 118 yards, over four yards a carry. We would like to be 4.5, but I’m pleased with what he’s bringing to the table. The other thing you got to remember is, we had 76 plays. I think he was in all 76 plays, and that’s extremely hard to do for skill guy particularly running back. So, I’m very pleased with what he’s bringing to the table.”

“Well, it’s real hard. That’s what I said earlier, is we’re going to have to find a way with our availability offensively to muster some more consistency to where we can stay on the field a little longer because I was really concerned about us coming off the field fast and leaving the defense on the field. It’s what I said in my opening statement: our defense was unbelievable about forcing turnovers offensively we just don’t. We couldn’t get enough stuff going right now.”

On the offensive line’s performance

“Looked like OK. Again, it’s really hard for me to tell on the sideline. It’s a little unfair. I can see some things but not a lot. So, I would have to comment on that on Monday.”

On what the offensive gameplan was going in

“Well, we don’t change a lot you know. We want to try to stay balanced. That’s what we have to do. We’re young at tackle right now, so we’re not just going to become a throwing team. And then, because we don’t have a lot of depth at running back right now, we can’t just become a running team. We want to try to stay balanced as possible. And then as the game goes on, try to get a feel for what we think is working and try to lean in that direction. And then, obviously, try to keep them off balance with what they’re doing defensively.”

“Well, I don’t think we’re the same team we were when we started the first game. I mean, we got some young kids out there. We’re playing with three freshmen on the offensive line. We’re down six starters on offense from day one. So, it’s not fair to say to the team that it’s the same group. Now, we’re gonna compete our a– off and try to win every game, but we’re a little different team right now than we were when we started against Tulsa.”

“I thought he was pretty good. Again, a lot of evaluation on him comes from watching video because we can’t see the field like he can. So you kind of have to watch that and make that decision on Monday based on what’s happening in the secondary on both sides of the field.”

On how limited OSU is with its kickers

“Well, we’re not the same team as we were. There’s no question. Sometimes you’re going to miss a field goal, but we have to be able to kick extra points. We got behind eight ball, we started off early, we got a chance to jump up and start missing extra points. Now we go into 2-point conversions, play calling is different. It’s new for him. It’s the first he’s been out there. He jumped out there in OU and was really successful. Wasn’t as successful last week. Then obviously was not very good today. But he’s the guy that’s kicking for us and so we have to continue to work with him, and we have to believe in him. But the kicking game was very important. We were really, really good today in special teams, with the exception of being really, really poor and kicking PATs and field goals.”

“We got to get our guys rallied. I told the guys, I really appreciated they had a lot of fight and competed all the way to the end. And I was really proud of the way they fought and tried to give themselves a chance to win in the end. That part I was really excited about. Got to do a better job of coaching. Got to try to find ways to limit big plays on defense and try to find ways to put together some drives on offense next week.”