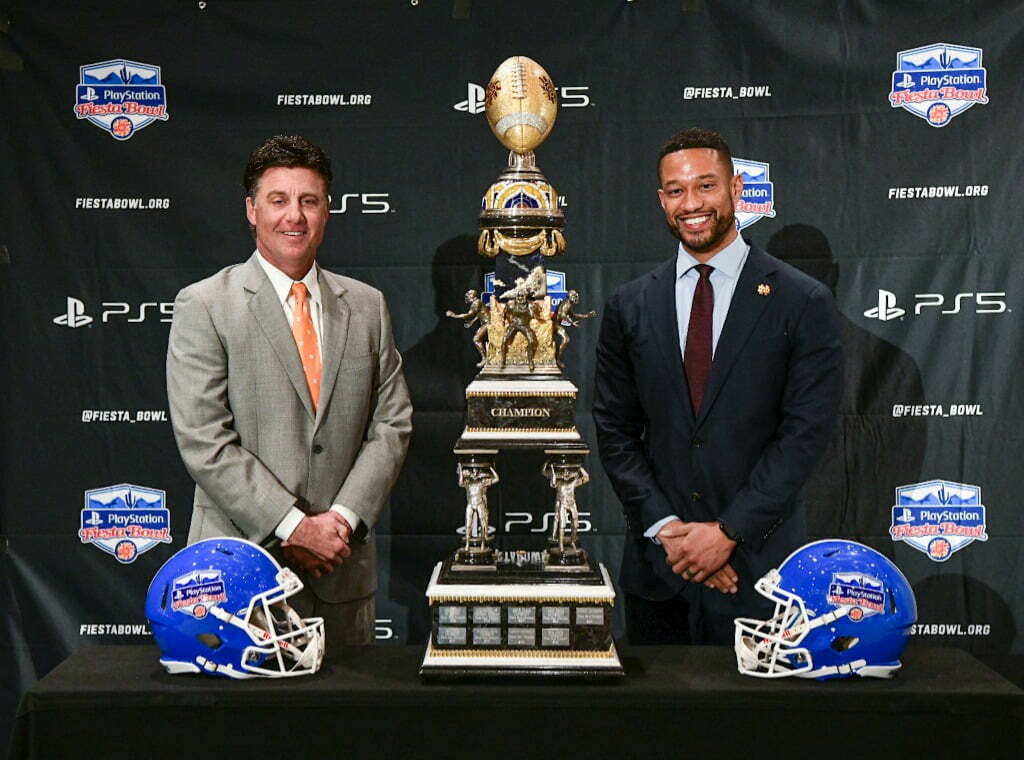 [Photo via the Fiesta Bowl]

SCOTTSDALE, Arizona — The media sessions are done, and all that’s left is the football.

Oklahoma State coach Mike Gundy met with reporters over Zoom for the final time ahead of Saturday’s Fiesta Bowl against Notre Dame in a joint news conference with ND coach Marcus Freeman. Here is everything Gundy said.

“Well, we’re very excited and thrilled to be in the PlayStation Fiesta Bowl. Congratulations to Coach [Marcus] Freeman and Notre Dame. They’ve had a terrific season. We’ve had a great week, as always, being in the Scottsdale area. We have great weather, great accommodations. The (Fiesta Bowl Committee) Yellow Coats have been fantastic, the people in the community. Our players, our fans, families have had a great week. As to be expected, we’re very excited about playing in the game. What a great matchup, two teams that have worked hard to get to this point. So been going at it since the first of August, and going to get a chance to play one more game tomorrow. And very excited. Looking forward to the game.”

“Well, we’ll have a couple guys calling plays for us. We’ll do it on first and 10 and then third downs, passing situations. After watching it for the last three weeks, we’ve had a number of guys in the room that I was comfortable with. So we’re going to use a couple of guys at different times in the game based on the situations. You have Dan Hammerschmidt, you have Tim Duffie, and you have Joe Bob Clements. Those guys will be able to mix up the play calling based on the situation.”

On what he does to prepare so well for bowl games

“Well, I’m a firm believer that players win games. Coaches can lay out a blueprint and give them an opportunity, but players have to be able to go out and compete and play and win games. Particularly in bowls, just my experience doing it for a number of years, some teams are excited to play in bowl games and maybe some teams aren’t.

“We’ve been very fortunate that we have a great culture at Oklahoma State. We have young men that really like to play football. I think that’s an advantage, particularly in today’s society, that these guys really enjoy playing football.

“And our bowl preparation has been great. Once we finish the regular season and we give them a week off, and then we start bowl preparation, we go at it pretty good. And then they make a decision as a team how hard they want to practice, what they want to put into it, what their commitment level is. And we’ve been very fortunate over a number of years to have really quality young men that look forward to playing in bowl games. We feel like that we owe a lot to the PlayStation Fiesta Bowl. We feel like we owe a lot to our fans. People that support us throughout the year. And when you play a great Notre Dame team, we feel like we’re obligated to give them our best game.”

On how OSU’s offensive has played this season

“We played good at times. There were games that we didn’t play as well, and it was based on turnovers. It’s not a complicated game, right? Move forward. Don’t take negative-loss plays. Take care of the football, don’t turn it over. Be good in special teams. Defense, don’t give up big plays. So it’s not a complicated game — for us, anyway. At times when we didn’t play as well offensively is when we turned the football over.”

On how three defensive playcallers will work

“So you have first and 10, second and 10-base plays in a game. And then you have third and five plus would be more of a passing situation traditional. And the defensive coaches have done what everybody else in the country does. They have breakdowns and numbers based on that. And that gives them an opportunity to make play calls based on the situation that we think we’re in defensively, compared to what Notre Dame has done offensively. They’re playing with two quarterbacks. Guys are a little different style-wise, but both have been successful. Depending on the situation, certain guys make plays. Particularly third and five plus would be different than first and second down in normal.”

“Well, I felt comfortable with the coaches in our defensive room. As you know, you followed us for a long time. Most of the guys on my staff have been with me a number of years. So for that reason, they have a pretty good idea of what’s going on. Obviously, we rely on our coordinators, just like everybody else in the country. But in most cases, you’re going to have coaches in each room that are capable of calling offense, defense, could be special teams, based on being in there for a number of years. So once Jim decided to leave, then I had to go to work and watch and see and get a feel in meetings and different things, practice, to get an idea of where we were at as a staff. And I became comfortable with several guys being able to help calling the game.”

On what made Clements, Duffie and Hammerschmidt stand out

“Well, I didn’t necessarily sit down with everybody. I just had communication with them throughout the week on what my plans were. And they were comfortable and fine with the situation and looking forward to being able to call plays in the game. That’s the fun part of it. Some guys don’t ever get a chance to be a coordinator. They don’t ever get to sit down on play station and call plays. Now that they’re coordinators, they get a chance to call some plays in the game, so that’s a pretty cool situation.”

On something he admires about Notre Dame’s team

“Teams that have had this much success and get to bowls like the PlayStation Fiesta Bowl is you have to compete against teams that play really hard. And so Notre Dame plays hard. The guys look like they like to play football. They run to the football. They compete. They fight for extra yards. Their quarterbacks aren’t scared to make plays with their legs at times. And again, I go back to, it’s not really a complicated game. And teams that have players that are willing to compete, run to the football, fight for extra yards, care about the guy next to them. And that’s what you have to do when you play in games like this. And that’s what I see from Notre Dame.”

“We’re doing really good with COVID. We had a few cases before we left. Since we’ve gotten here, we’ve only had one case. We’re in great shape. Our guys have done a good job. And Jaylen Warren has practiced and is doing fine. I feel like that he’s healthy for the first time in, gosh, since the TCU (Texas Christian University) game, really. He’s back and feels pretty good, and excited about him being able to play. As coaches, we always want our players that put forth the effort over a year to compete and finish the season full speed; to give him a chance to go out there and play and have some fun. And he’s doing really well this week.”

“We’re in good shape with COVID. We’ve been very fortunate. As I said, our medical staff has been good. Our players have committed themselves to staying healthy. So we’re in great shape.

“Blaine won’t play in the game tomorrow. We just don’t feel like that he’s in a position to play. So we’ll set him and let him get some offseason work, get him ready to go for spring ball.”

“Well, we have all the respect in the world for Notre Dame. It’s the first time we’ve come across them. I said this in the press conference the day that the game was announced. My mom is from Flint, Michigan. She was born and raised up there. She was born and went to Catholic school. So I had a little bit of “Go Blue” and the Notre Dame fight song pushed on me as a young kid growing up in Oklahoma.

“So I’m very aware of it. We’re extremely excited. I mentioned a few weeks ago that myself and our athletic director then, Coach [Mike] Holder, we tried to schedule a home-and-home with Notre Dame and found out they were scheduled way, way, way in advance, so it wasn’t possible.

“And so is this a great opportunity and a big game for everybody on the field and all of our players and everybody from Oklahoma State? Sure it is. And we prepare the same way each week. I hope that we do. That’s my responsibility to make sure our players understand that side of it.”

“It’s been a really neat situation. I gave him a hard time earlier in the week because we knew that this was his home and he played here, very tradition-rich high school. We were leaving to go to practice the other day, and my youngest son, my 17-year-old, was going to drive over and meet us over there so he could work out in the weight room. And we were walking out to get ready to get on the bus. And I said, ‘Hey, Coach Dickey,’ I said, ‘Do you know how to spell the high school that we’re practicing at today?’ And he said, ‘Well, you know that’s my school, right?’ I said, ‘No, I didn’t know that was your school. I just need to know if you know how to spell it so he can put it in his GPS so he can get over there.’

“I was giving him a hard time about it. And he spit it out real fast on how to spell it. He said, ‘Coach, that’s my high school.’ So anyway, I kind of let him get on the bus and didn’t say anything about it ’til later.

“But it’s been really neat. We’ve got several connections out here. It’s interesting. We have quite a few people that have some ties out here in this area, and it’s been fun for them to come back and be here a week.”