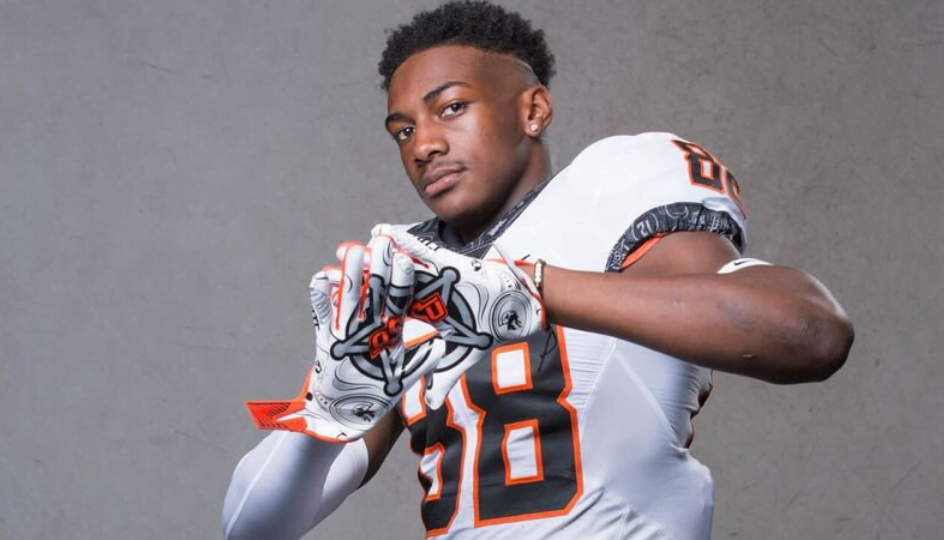 Oklahoma State is short on pass-catchers in its 2019 class and could use a late-cycle commitment from a player like Langston Anderson, who this weekend announced that he’ll be making his college commitment on the first day of the early signing period.

Anderson, a three-star receiver listed at 6-1, 192, is a standout from Heritage High School who has garnered two dozen scholarship offers. As signing day — the 19th of Dec.! — fast approaches, it appears to be a three-team race between OSU, Baylor and Ole Miss.

Dustin Ragusa and I have predictions on where he ultimately lands, but first, the skinny on his latest recruiting activities.

After trimming his top schools to five on Dec. 1 — Baylor, Wazzu, Ole Miss, Auburn and OSU — Anderson welcomed Baylor coaches into his home for a home visit on Dec. 6, did the same a week later with OSU’s staff, then made an official visit to Ole Miss this past weekend. It’s pretty clear the top three are Baylor, Ole Miss and OSU, and potentially in that order.

Oklahoma State offered Anderson back in March. He then visited on an official basis on Oct. 5, posing with Biletnikoff trophies and teasing himself to, potentially, be the next highly-touted pass catcher to go from Texas to OSU.

He’s made other visits during that span, too. As I noted, Ole Miss received an official this past weekend, and Baylor received one a month ago in mid-November. His only other official to this point has been Arizona State, which isn’t in his final cut. But the most contact he’s had with coaches based off his Twitter, which has documented his recruitment like a teenage girl’s diary, has been between Baylor and OSU’s staffs.

Ragusa: Oklahoma State. I was going to go with Baylor, but after a helicopter visit from Gundy, Kasey Dunn and Mike Yurcich last week, there are rumblings that Anderson might be leaning towards Stillwater. With the race already being a close one, these rumors have swayed my prediction to OSU.

Boone: I’m going with Oklahoma State. Matt Rhule can recruit. And Baylor already has a decent infrastructure in place to compete at a high level, with a top-5 class in the Big 12 incoming for next year. But the Bears have two commitments at the position already — OSU has none. The opportunity to play early — if not right away, in some capacity — has got to be enticing for him.

You might also be interested in …. Predictions on where Soni Fonua will wind up … Three things to know ahead of national signing day … What JUCO running back Dezmon Jackson brings to Oklahoma State