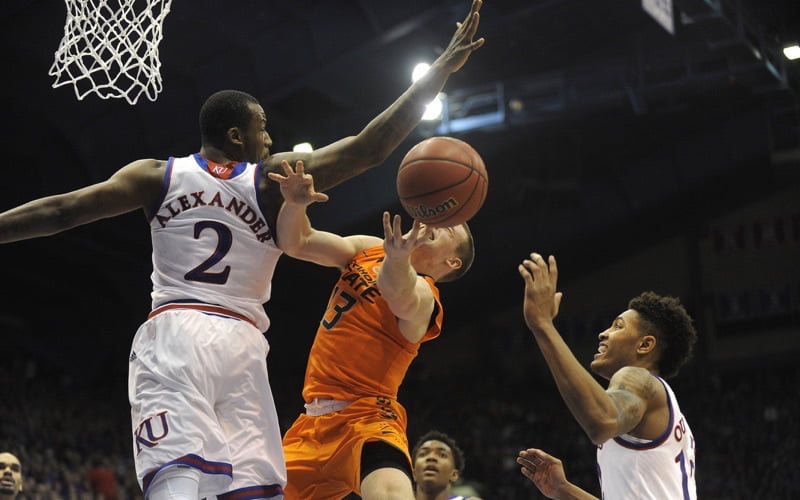 Phil Forte had a tough second half in Lawrence. (USATSI)

I watch a lot of Oklahoma State football and basketball games. Pretty much all of them actually. And tonight’s game against Kansas was as rough a viewing experience as I can remember.

Most of it was because Big 12 refs ref like they’re eligible for the Naismith Award and can be drafted by NBA teams but part of it at least was because OSU and Kansas were just putrid for most of the night.

In the end Kansas was less putrid than OSU was and they came out with the 67-57 win.

The teams combined to shoot 32/94 from the field, hoisted 71 free throws (Kansas shot 46 of them) on 49 fouls and turned the ball over a combined 28 times. That is just not good college basketball.

Phil Forte scored eight of the Cowboys’ first 12 points and it looked for a while like he would have another one of those “Phil Forte in Allen Fieldhouse” games where Bill Self sends a text after the game to the recruiting coordinator who let him get away from KU that’s just a long string of expletives.

Forte would go on to have 16 of OSU’s 28 first-half points but he was 1/2 in the second half after sustaining a leg injury and finished with 18 points.

Nobody else could pick up the slack.

Le’Bryan Nash got in a fake tough guy fight in the first half which was enjoyable if you like fake tough guy fights and he didn’t find his rhythm until late.[1. Related: Can somebody trick Nash into thinking that when the game starts there are only 10 minutes left to play on the night? This seems like it would be both beneficial and not difficult to pull off.]

He finished with 21 and was 11/12 from the free throw line but OSU got just 18 points from guys not named Nash and Forte and shot 31.4 percent overall (OSU’s 147th best outing out of 15o in the last five seasons).

It didn’t help that OSU, a team Travis Ford wants to take (and presumably make) a ton of 3s, was just 3/16 from beyond the arc.

And it’s not like Kansas was much better. They shot 37 percent from the field and 25 percent from 3 but you don’t need Brent (or Mark) Price out there to get a win when you get to the stripe 46 times.

This loss actually felt more frustrating to me than the Iowa State game last week.

I think that’s because I don’t actually think Kansas is that good, at least compared to Kansas teams of the past.[1. This is a relative statement. They’re obviously good but they felt a little gettable by comparison to other Kansas teams in AFH.] Other than getting to the line 1.4 million times (approximately) what did they do well?

Their defense was pretty decent (I guess — it’s hard to tell in a game like this) but they’re empty so often on offense and make horrific decisions.

As for the officiating — the annoyance I have in general as a fan is that I don’t want to spend 150 minutes watching a college basketball game in which I’m looking up Big 12 single-game free throw records midway through the second half. That’s absurd.

I understand the need to control the game if you’re a referee but the whistles were being tweeted (both ways) on hand touches to the back. This is the Big 12 not the Colvin.

I’ve actually seen cleaner, more physical games at the Colvin than what was called tonight.

This from Travis Ford is putting it mildly:

The loss didn’t help things but a win wouldn’t have made a viewing experience like that much better.

More notes and thoughts on a rough night in Lawrence.

• Remember when Steph got really good at going to the bucket his junior year at Davidson? I feel like Forte is on the verge of that. He’s the “still going to the homeless shelter but trying to find a stable job and place to live” Curry.

• Kansas pushed OSU’s perimeter screens all the way to the middle of the court in the first half. That seemed like a bad idea given that Anthony Hickey was involved.

• Speaking of Hickey — he had a pretty quiet 5-3-5 which I guess is a good thing for the rest of the season. It just never really felt like he got going.

• The Nash fight was ridiculous. As @orangefactor pointed out Nash got baited so hard by Kelly Oubre (a freshman) and he took it. Nash! He’s been in college for 57 years!

• The best part of the entire fight was that Travis Ford’s response was to insert Mitchell Solomon into the game right after it ended. Got ’em!

• Speaking of old folks…did Perry Ellis construct peach baskets with James Naismith or am I making that up?

No one is making any shots. It's like there's a lid on the rim. Or… pic.twitter.com/oja6HmFQUn

• Tavarius Shine was awful. His final line was 0/5 with two fouls, an assist, a rebound, a steal and a turnover. The stage clearly overwhelmed him which is fine because he’s a freshman but still a bummer.

• I love that Forte wears a shoe that looks like Dan Bailey’s kicks had a shoe baby with Kobe Bryant’s kicks.

• The KU fans were super committed to the “air ball” chant on Forte in the first half, weren’t they? I like the hostility. So does Doug.

• The 4-on-1 break in the beginning of the second half where OSU didn’t score after Nash tried to dish to Hickey even though he had Forte kicking out and was the biggest guy on the break was absolutely peak Nash.

• Phil Forte will have to put “Marcus Smart’s best friend” on his first employment application. Maybe on his grave.

• The Jayhawk in the middle of Kansas’ floor is about the same size as Cardale Jones.

• Self was not messing around with Forte tonight even though Forte still got his points early. By the way, the last thing I need to hear during Big 12 play is “Forte looks like he really hurt his leg tonight…”

• Kansas’ offense is not good. If they win the Big 12 it will be because of two things: No emerging conqueror and the Phog.

Kansas football in 2014: 9 losses
Bill Self at Allen Fieldhouse ever: 9 losses

• Are Dave Flemming and Miles Simon doing every OSU game this year or no?

Next game: Norman on Saturday.[1. I’m thoroughly looking forward to the “JUST-LIKE-FOOT-BALL!” chant at some point in a Bedlam game this year. I get giddy just imagining it.]